Minn. celebrates women in sports, more work to be done

In honor of National Girls and Women in Sports Day, a new annual report looks at the percentage of women head coaches of women's collegiate teams. 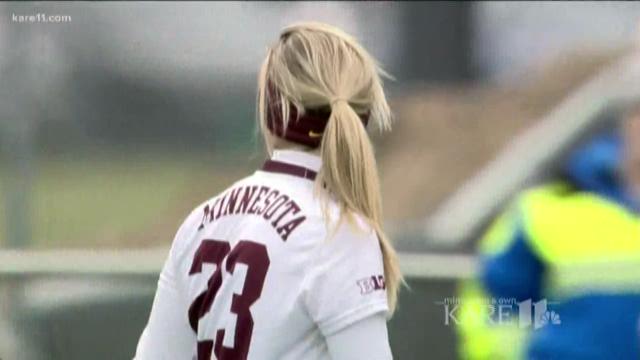 ST. PAUL, Minn. -- An annual report card that looks at the percentage of women head coaches of women's teams shows few Division I colleges are making the grade.

The Tucker Center for Research on Girls & Women in Sport at the University of Minnesota released its sixth annual Women in College Coaching Report Card.

The report reviewed 86 NCAA Division I athletics programs during the 2017-2018 academic year. The University of Cincinnati and University of Central Florida were the only two institutions to receive an A grade. The U of M received a B and ranked the third highest out of the 86 institutions.

Overall, the percentage of women head coaches of women's teams went up for the fifth year in a row–now at 41.5 percent. That's slightly up from last year's 41.2 percent.

"What a lot of people don't realize is that when Title IX was passed in 1972, 90 percent of female athletes were coached by women. Today that number is at 40 percent. So while the number of female sport participants is at an all-time high, the number of women coaching women is near an all-time low," said Nicole LaVoi, co-director of The Tucker Center for Research on Girls & Women in Sport.

LaVoi went on to say, "So men coaching men's sports in college is about 98 percent. So what we know is that men have a dual career pathway into the coaching profession. They coach almost 100 percent of men athletes and 60 percent of women athletes."

According to the report, in 60 percent of vacant head coach positions, a male was hired. 14 percent were of female head coaches replaced by a new male head coach.

"The reason why there's been such a decline and a current stagnation of women coaching women is really complicated," LaVoi said. "The reason why we do the report is to stimulate dialogue, raise awareness, hopefully to recruit and retain more women in the coaching profession and to hold decision makers who hire coaches accountable."

The report was released Wednesday in honor of National Girls and Women in Sports Day.

More than 20 women in Minnesota were honored at the 32nd Annual Minnesota National Girls and Women in Sports Day Celebration at the Minnesota History Center in St. Paul.

The ceremony honored women who have helped promote and advance girls' and women's sports.

Carol Agnes is one of the recipients of this year's Breaking Barriers Award. She built the athletics department at the College of Saint Benedict from the ground up.

"They had nothing except a powder puff football game in the fall and an Irish-German basketball game in the spring. Otherwise, they had some bikes that the girls could use." Agnes recalled. "Title IX came in one year after I started at Saint Benedict's and it just changed everything. All of a sudden schools were realizing that they needed to provide opportunities for women and that was just wonderful."

A full list of recipients can be found, here.

In April, women coaches at all levels will come together for the 5th Annual Women Coaches Symposium at the U of M.