Compromise was the word of the night, as the gas tax plan was dropped and the medical provider tax was saved. DFL and GOP leaders met in the middle. 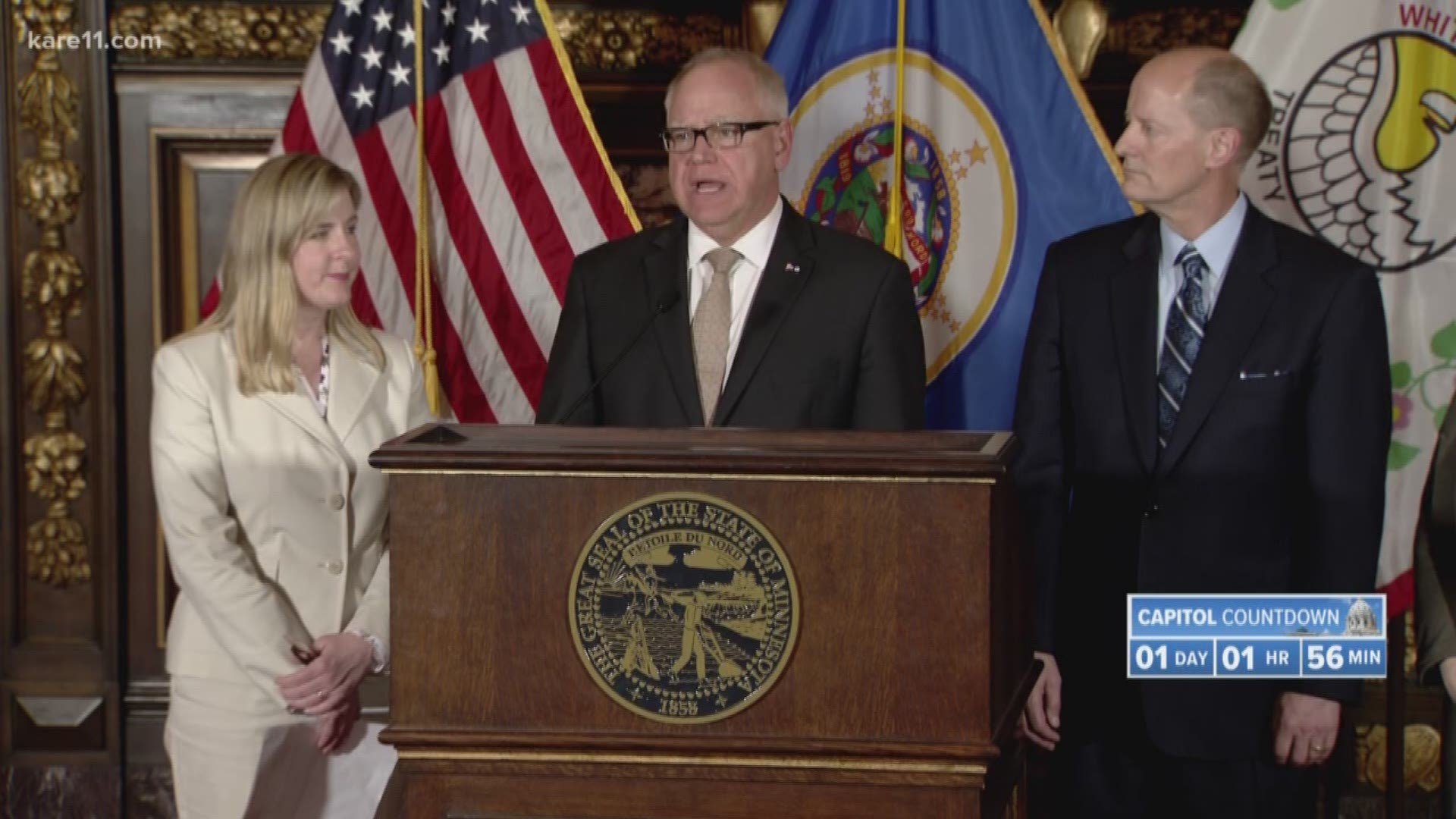 A special session will still be required after Monday night's constitutionally-required end of session. It's most likely to be on Thursday, but those details are still being worked out by leaders.

The deal aims to increase state aid to schools by two percent in each of the next two years, which is less than House Democrats were shooting for but considerably higher than what Senate Republicans had in their bill.

"There’s a lot to like in here, a lot of compromise to be made, but I think the people of Minnesota will be served well," Gov. Walz told reporters.

The Medical Provider Tax, which was set to expire later this year after 27 years on the books, will be extended. That will prevent the Health Care Access Fund from being depleted. But the rate charged to hospitals and doctors will drop from the current 2 percent to 1.8 percent.

The governor, who's in his first year in office, praised Senate Majority Leader Paul Gazelka for taking the time to hear his heartfelt concerns. He also praised House Speaker Melissa Hortman for finding ways to keep the talks alive when things were beginning to break apart.

"Sometimes instead of win or lose it’s a draw and that’s what we had here today it was a draw. And it was good for Minnesota," Sen. Gazelka remarked.

"Some times we pushed each other but in the end I think we found that place in the middle, which you have to find in divided government."

The accord also features a $150 million increase in public safety spending, with at least $50 million of that going to the prison system to help with safety for corrections officers and inmates.

Rep. Hortman said many of the details are yet to be hammered out by the conference committees that are working on merging competing House and Senate versions of the ten finance bills that must be passed.

"We agreed to a budget deal," Hortman explained.

"We are leaving it to the leadership of all of the members of the legislature and the commissioners of the state of Minnesota to work out the agreements in public, with the input of the public."

She acknowledged those 10 bills can't all be finalized and passed of the floors of the House and Senate by Monday night, which is why a brief special session will be required.

Budget reserves will be tapped to the tune of roughly $500 million, and part of the Health Care Access Fund will be used to fill holes in the Health and Human Services budget.

The agreement also calls for a $500 million public works construction bonding bill. House Minority Leader Kurt Daudt hinted strongly Sunday night that he will not deliver the minimum six Republican votes it would take to reach the 81-vote threshold to pass a bonding bill in the House.

Gov. Walz, as a career high school teacher, was expected to prioritize education. He asked the legislature to increase state aid to schools by three percent in the first year of the two-year budget for FY 2020-2021, and by two percent in the second year. The House education finance bill mirrored those numbers, while the Senate’s bill went with a half percentage point in each of the two years in the cycle.

Lawmakers also felt pressure to boost the budget for the state’s prison system, to deal with staff shortages that came to light after the deaths of two corrections officers in 2018.

Capitol Democrats assert they were given a mandate by the voters in 2018 to make new investments in schools, health care and transportation. Senate Republicans weren’t on the ballot in 2018, but still asserted they had a mandate from previous elections to slow the growth of government, block gun reforms and stop legislation they perceived as normalizing same-sex relationships and non-binary genders.

When high-level talks began two weeks ago the DFL-controlled House and GOP-controlled Senate were roughly $2 billion apart on their spending targets. They must arrived at a single number in order for House/Senate conference committees to complete their work sewing up the 10 major finance bills that comprise the budget for FY 2020-2021.

If the deal holds and becomes law, it will commit to spending $48.3 billion over the two-year period that begins July 1.  That's below the House's starting spending target of $49.8 billion, and above the Senate's target of $47.6 billion.

The House budget blueprint envisioned increases in the gas tax, and capturing part of the off-shore corporate profits being returned to the US in response to the federal tax overhaul. The House plan also counted on the 2 percent Medical Provider Tax, which is due to expire later this year after 27 years, to be extended.

The Senate’s spending target was only slightly above the $47.4 billion in automatic spending that was set into motion by the 2017 budget bill. That’s still a significant increase over the $45.5 billion the state expects to spend in the current biennium.

The Senate had been steadfast in opposing keeping the Medical Provider tax, referring to it as “sick tax” because providers pass the cost along to patients in all income groups.

The budget deal doesn't cover any of the policy issues that had driven a lot of conversation at the Capitol. Several initiatives that are still alive but appeared destined for the sidelines include:

Most of those bills passed only in one chamber, but not the other.