Senate Republicans Tuesday unveiled their version of a tax conformity bill, which is designed to put the state and federal tax codes back into sync, while at the same time shielding Minnesotans from taking a hit on state taxes next year. 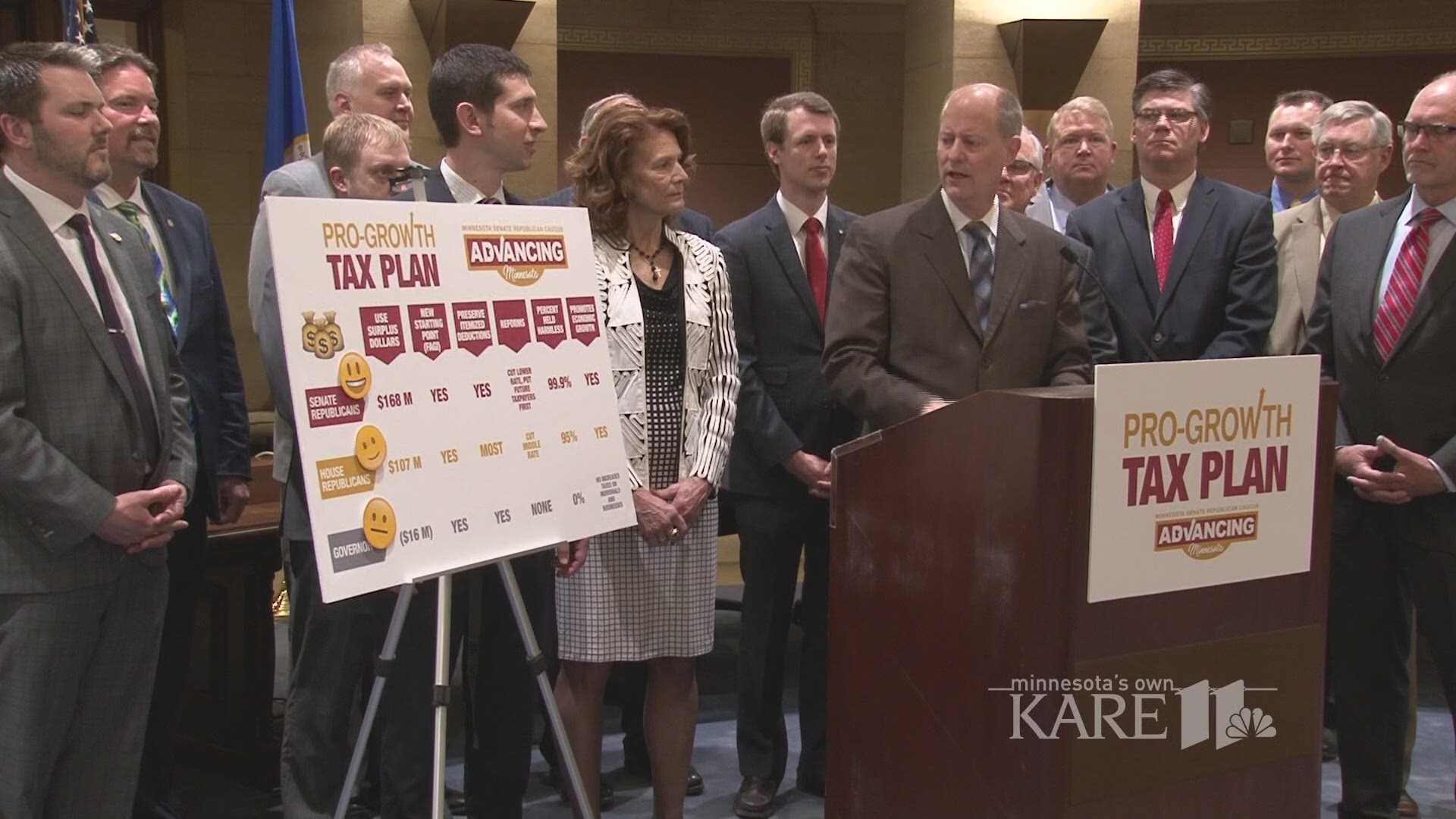 ST. PAUL, Minn. -- Senate Republicans Tuesday unveiled their version of a tax conformity bill, which is designed to put the state and federal tax codes back into sync, while at the same time shielding Minnesotans from taking a hit on state taxes next year.

Senate Majority Leader Paul Gazelka of Nisswa told reporters that the Senate plan, if passed and signed into law, will protect 99 percent of Minnesotans from state income tax hikes that would otherwise result from simple conformity.

The plan envisions spending $168 million of the surplus, in order to provide itemized deductions no longer available in the federal code, and to lower some taxpayer's base rate to compensate for the changes brought about by the federal code.

Features of the current Minnesota tax code that would be preserved include the $4,150 dependent exemption, the state standard deduction of $13,000, deductions for mortgage interest, home equity loan interest, charitable donations and state and local taxes paid in the previous tax year.

The bill will go to committee on Wednesday, and most likely be passed in the full Senate on Thursday. It would then need to be rectified with the version passed by the House on Monday.

Both bills would make Adjusted Gross Income the starting point for calculating state income tax liability, rather than Federal Taxable Income, which is currently the base. That's an idea that was part of Gov. Dayton's initial tax proposal, issued earlier in the session.

Dayton's plan is designed to reduce taxes for 2.1 million Minnesotans, but Republicans have characterized it in the media as a tax increase. That's because -- quite apart from the conformity issue -- Dayton wants to hold onto the medical provider tax that pays for the Minnesota Care health plan.

That medical provider tax is set to expire on Dec. 31, 2019. Dayton's tax proposal would extend that provider tax an additional six months, to keep Minnesota Care funded through until July of 2020.

"It’s not raising the tax, or putting on something that doesn't exist," Dayton told reporters Tuesday.

Republicans contend that the medical provider tax is passed on to all patients by doctors and hospitals, so continuing that for another six months is tantamount to a tax increase on all Minnesotans.

"To say that, it's dishonest," Dayton remarked. "And they know it. They know what they're doing. And they'll keep doing it through November."

Dayton has also drawn fire from the GOP for a proposal to undo some signature tax breaks passed by the legislature in 2017. One of those got rid of the automatic inflator on the corporate and industrial property taxes. Another measure did away with inflation-driven taxes on premium cigars.

The Senate version also includes a tax cut trigger, of sorts. The bill instructs the revenue commissioner to lower income tax rates by one point across all four income tiers, if there's a certain amount of money left in the surplus next fall.

Dayton is expected to resist that idea, given past rhetoric about maintaining a budget buffer against future economic downturns. The Democratic governor has warned lawmakers he'll veto bills that include policy items he can't accept.

And while coming up with a plan everyone can agree upon in the final three weeks of session will be a daunting task, virtually everyone agrees it's not something that should be left until the 2019 session.

Tax preparers, tax software companies and the staff of the Minnesota Dept. of Revenue will need ample time to implement the changes.