The business model doesn't include a website, social media, credit cards or a phone number. 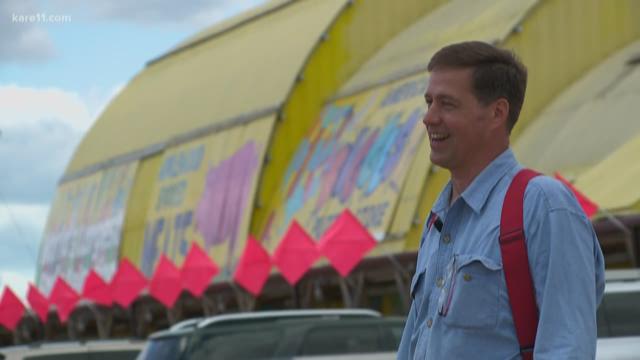 Retailers call on ad agencies with the goal of increasing traffic.

Robert Wagner just drives to the hardware store and picks up more yellow paint. An entire marketing plan summed up in a word: marigold.

"You can never have enough yellow fence," Robert laughs.

Sections of Robert's marigold picket fence line more than a mile of Minnesota Highway 169 between Jordan and Belle Plaine.

"I'll give you that," says the man in the red suspenders. "It's different."

Different could well be the cornerstone of the Wagner family business.

Let's start with the store's chief pie baker, Herbert Wagner. He is 88-years-old, nicknamed Hippy and also happens to be Robert's father.

"There's so much candy in here you never could see it all," he proclaims.

He may be right.

Thanks to a series of additions, Minnesota's Largest Candy Store is now more than a football field long, filled with more than 3,000 varieties of candy, 6,000 jigsaw puzzle designs and a vast assortment of soda, jerkies and salsas -- plus Hippy's pies.

Dispensing it all is a staff of employees made up mainly of Robert's family members, including two teenage cousins named Madison Hartmann, both known to their co-workers as Maddie 1 and Maddie 2.

The Maddies will greet you warmly at the cash registers, but they will not accept your credit card. Minnesota's Largest Candy Store does not take plastic.

Nor will the Maddies scan your purchase. No checkout scanners here either. And if you are looking for a link to the candy store website, forget it.

"There isn't one," explain the Maddies. "We don't have a website or a phone number."

Seriously? What kind of business doesn't have a phone number?

"If we had a phone number out there we'd be answering the phone all the time," explains Hippy.

Some businesses might consider that a good thing, but Minnesota's Largest Candy Store is a business marching to its own drum.

"I do not like to read any business stuff," says Robert. "If we start reading the Walmart book, we're going to be like Walmart. We don't want to do that."

Instead, Robert and his family have run their business on instinct and a willingness to try new things.

If not, there would be no candy store to begin with.

The Wagners were apple growers.

"My dad started growing apples before I was born," says Robert on a tour of a family orchard a few miles from the store.

All was going along quite nicely, until an act of God intervened. "The big hail storms for us were 2005, 2006," says Roberts.

In those two storms, two years of the Wagner family's hardwork were wiped out.

"It was such a blessing," says Robert.

The Wagners made lemonade from battered apples. One table of candy put out to try to offset some of the hail losses, has now grown into the largest candy store in the state and a larger business than the orchard ever was.

A business big enough to have a social media strategy. "Facebook, no, no, never been there," says Hippy.

That doesn't mean you won't find a Facebook page for the store, one with more than 5,000 likes, to be exact. "We have no idea who's doing that," says Christine Wagner, Robert's daughter, who also works at the store. "But thank you to whoever did."

So if the World's Largest Candy Store doesn't do social media, websites, phone numbers, scanners or credit cards - what does it do?

Yep, "Hippy's favorite music, it's seven songs and they're on replay all-day-long," explain the Maddies.

Nothing makes Hippy happier than seeing customers paring up and dancing in the aisles.

And maybe, just maybe, Minneosta's Largest Candy Store is succeeding, not in spite of the polka music, yellow paint and countless other quirks, but because of them.

"We want to be different, we want to be unique," says Robert. He points to any number of ubiquitous convenience stores that dot America's landscape. "There's no need to all be the same."

So, if and when, the guy who doesn't read business books writes his own, he's likely to mention warm and inviting service, the front windows the Maddies wash TWICE a day and the irresistible aroma of Hippy's pies, baked fresh and sold hot all day.

He'll also add this: "A quote from PT Barnum, 'The noblest art is making people happy.'"

The man in the red suspenders pauses and smiles. "That sums up a lot," he says.

His will be the first business book to advance the theory, the best offense is a good marigold fence.

Note: Minnesota's Largest Candy Store is open seasonally, from July through November, seven days a week from 9 a.m. until 7 p.m. Look for the yellow fencing and barn along Minnesota Highway 169 between Jordan and Belle Plaine.