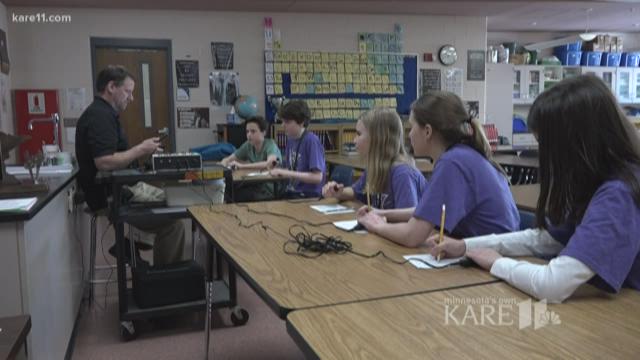 MINNETONKA, Minn. - A team of middle school students is answering hard questions, quickly, as they prepare to go to the Science Bowl National Championships at the end of April.

Minnetonka Middle School West students were recent winners of the regional Science Bowl, allowing them to compete against some of the brightest minds in the country.

The format for the Science Bowl is pretty simple.

"Science bowl is kind of like Jeopardy. It's a rapid-fire questions asking about science and math questions that kids know," said Mitch Elvebak, 8th-grade science teacher.

And for the next few weeks, they will practice.

"So the kids do practice that flow of the game and know what it takes to know when to buzz in and when not to and build that confidence on when to give their answers," said Fred Stock, 6th- and 8th-grade science teacher.

This is Minnetonka Middle School West's third year in a row sending students to Nationals, and the fifth time since 2009.

For some of the team members, it's their second and even third time going, and they have some advice to share for their teammates.

"Nationals is definitely a higher caliber of competition, so when you get to nationals, all the teams really worked hard to be there," said 8th grader Rory Cole.

The National Competition will be April 26-30 in Washington, D.C. The students from Wayzata High School are representing Minnesota in the high school division at the National Science Bowl.