The latest numbers from the Minnesota Department of Employment and Economic Development show the industry will be short nearly 20,000 workers over the next decade. 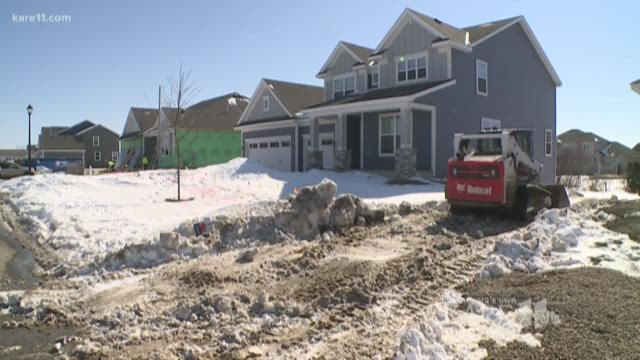 Minnesota was on that list, but industry leaders say job growth hasn't been a problem for them in quite some time.

Finding people to fill those jobs however, has been a constant struggle.

"I think we're facing a crisis right now," David Seigel explains. "It's to the point now where we have projects delayed."

Seigel is the executive director of the Builders Association of the Twin Cities, which represents builders, remodelers and contractors across the Twin Cities.

He says some companies are looking for as many as 20 to 30 workers to keep up with their projects this construction season, but the interest among potential workers, he says, just isn't there.

"We just hosted a career fair at the Mall of America. We had a little bit of traffic the first hour. After that it was quiet," Seigel says.

The latest numbers from the Minnesota Department of Employment and Economic Development show the industry will be short nearly 20,000 workers over the next decade.

BATC is hoping to fill that hole through a variety of initiatives and programs, one of them being their Project Build campaign.

"The program will help expose young people, parents, counselors and teachers to the careers available in the construction industry," Seigel says.

BATC will ask the Minnesota legislature for a million dollars this session to expand the Project Build campaign.

The Builders Association of Minnesota is also working to address the shortage through a variety of bills at the state capitol.

Leaders plan to introduce two news bills later this week that each aim to attract more teenagers to the construction industry.

The first bill aims to educate school counselors on the types of jobs that are available.

"We have to get the counselors and the parents on board so that they understand the careers available to students who don't want to pursue a four-year degree," Seigel says.

The second bill would allow teenagers to work in construction sites during summer vacation.

"We're obviously not going to have them operating power equipment," Seigel explains.

"They're going to be in a safe environment with appropriate supervision."

Industry leaders are hoping these summer jobs will give teenagers an introduction into the industry that will show them what kinds of jobs are available once they graduate.

Home Depot recently promised $50 million to the Home Builders Institute so that 20,000 veterans can get the training they need to pursue careers in the home construction industry.

For more information on the worker shortage, or to pursue a career in the trades, visit these industry websites: