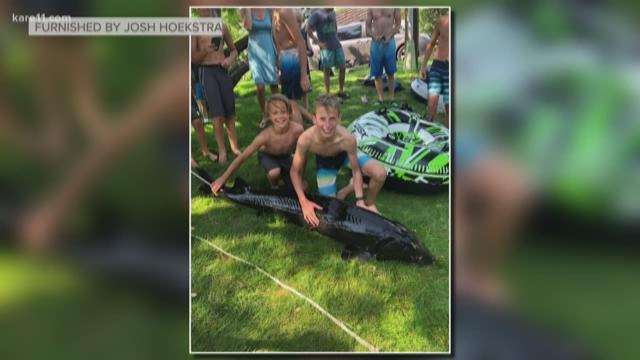 Along Minnehaha Creek on the 56th Street bridge in Edina, it's what everyone is talking about.

People are trying to catch a glimpse of the big fish.

"Didn't realize it would have this much attention," said 14-year-old Owen Sanderson.

He and 12 year old Mac Hoekstra spotted a 6 foot sturgeon lurking in the creek's shallow waters on Tuesday.

"It weighs more than both of us," said Owen.

They were able to catch the fish using a rope.

"We got a picture and then we put it back," said Owen.

Thursday Shannon Fisher with the DNR was out looking for that sturgeon in hopes of putting it in deeper waters, but he wasn't able to find it.

"Appears to be a large potentially female. It would be good to try to get into the Mississippi or the Minnesota," said Fisher.

He says it's very unusual to spot a sturgeon here, but what impresses him even more is the kids were so excited about the catch.

"Look at all these youth here that are enjoying this. It's been fantastic. A great learning experience," said Fisher.

An experience everyone in this neighborhood will never forget.

"Such a cool memory," said Owen. By far the biggest fish I've ever caught. Just a really cool memory to have."

DNR officials will likely be out again early next week looking for the sturgeon.