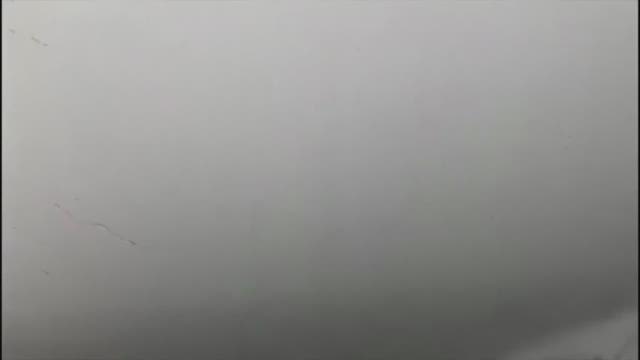 Credit: AP
In this photo released by Red Cross Durango communications office, Red Cross workers and rescue workers carry an injured person on a stretcher, right, as airline workers, left, walk away from the site where an Aeromexico airliner crashed in a field near the airport in Durango, Mexico, Tuesday, July 31, 2018. The jetliner crashed while taking off during a severe storm, smacking down in a field nearly intact then catching fire, and officials said it appeared everyone on board escaped the flames. (Red Cross Durango via AP) ORG XMIT: XLAT203

The terrifying moments before and after Tuesday's crash of a Mexican jetliner were captured on video by a passenger who lived to share his story.

Cellphone video taken by passenger Ramin Parsa shows Aeromexico Flight 2431 taking off in heavy rain and hail under gray skies, then abruptly coming down as darkness and confusion envelop the cabin.

All 99 passengers and four crew members survived, though more than 80 sustained injuries and burns of varying severity. The airline said pilot Carlos Galvan Meyran required surgery but his injuries were not deemed life-threatening.

The video presents a chaotic scene after the crash, with the lights going out and passengers scrambling for the exits amid screaming and wailing. Some are heard saying, "Which way?'' "In the name of Jesus'' and "Open the door,'' in Spanish.

"It was pitch dark and we started smelling smoke, so we could not breathe,'' Parsa told CBS2 in Los Angeles. "We're trying to break the window with our legs.''

All on board managed to escape moments before the plane burst into flames.

Parsa, a pastor at Poder de Dios Church in Reseda, California, painted a picture of the pandemonium in the cabin that supplemented the images from his video.

"Imagine you put 100 people in a room, in a dark room, pitch dark and filled with smoke,'' he said, "and there's a small door and everyone's trying to find it.''

The cause of the crash remains under investigation.