Arctic weather puts some New Year's plans on ice, but for other hearty partiers, the show goes on 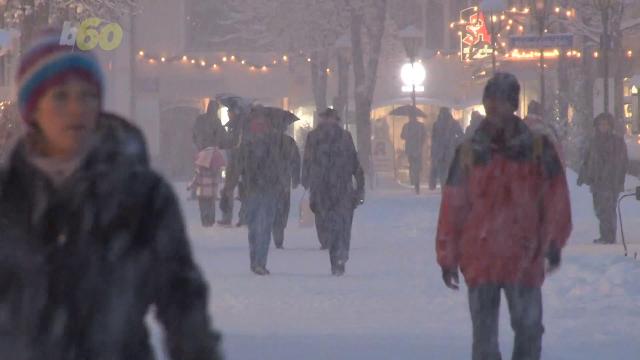 Baby, it's cold outside.

And it's so brutal across the polar tundra that is the eastern half of the nation, New Year's Eve and New Year's Day celebrations are being nixed or brought indoors.

The arctic invasion is rivaling that of the past 100 years for late December and early January,  Accuweather says, and temperatures are projected to continue to feel below zero over much of the Northeast and well below zero in much of the Midwest.

Wind-chill advisories and warnings blanket the Plains, the Midwest, the mid-South and Northeast, according to the National Weather Service.

The bitter temperatures have blasted daily records, including these on Sunday morning, the weather service reports: Huron, S.D., -27; Bangor, Maine, -24;  and Flint, Mich., -11.

And temps aren't the only records being made.

For the first time in 30 years, the annual New Year's Day Lobster Dip to benefit Special Olympics in Old Orchard Beach, Maine, has been rescheduled — to a hopefully milder Jan. 13.

“I’m not going to lie that I’m a little excited about 28 degrees as opposed to negative 16. It certainly makes me look forward to the event a lot more,” Public Relations Director Lisa Bird told Maine Public.

In Springfield, Ill., the annual New Year's Eve fireworks extravaganza was scrubbed as the mercury is expected to reach just 9 degrees and will be rescheduled for a toastier date.

In Ohio, fireworks were canceled and events moved inside in Miami Township. The New Year’s Eve ball drop and other activities in New Carlisle were reduced to an hour.

The village of Orchard Park near Buffalo scrapped its New Year’s Eve event because of subzero temperatures. “With frigid weather, the chance of a water line break is higher, and I’d rather have my public works crew fixing it than hoisting a ball up to drop,” Mayor Jo Ann Litwin Clinton told the Associated Press.

But for some hearty partiers, the show is going on.

More: How to survive the cold in Times Square this New Year's Eve

Nine hours before the iconic ball drop, crowds were expected to start packing Times Square. It could be the coldest New Year's Eve there in 50-plus years.

“Hundreds of thousands have withstood very cold weather over the years for a once-in-a-lifetime experience, and we expect this year to be no different,” said Tim Tompkins, president of the Times Square Alliance, which hosts the event.

1917 saw the most frigid New Year’s Eve in Times Square: 1 degree at midnight. This year, the forecast is for 11 degrees with a wind chill about zero, which would tie for second with 1962.

Extra New York Fire Department personnel were going to be on hand to provide medical assistance, and a National Weather Service meteorologist was also scheduled to be on site to monitor weather conditions.

The Penguin Plunge in Narragansett, R.I., on New Year's Day was also still on. But officials advised would-be plungers, expected in the thousands, to “use their good judgment” when weighing go or no-go.

And in Philadelphia on New Year's Day, Mummers Parade participants will still strut their stuff for the beloved event despite concerns for the young and elderly — and even worries over brass horns freezing up.

The heads of the five Mummers divisions — string bands, fancy brigades, wench brigades, comics and fancies — voted 3-2 to play on as planned, according to the Philly Voice.

Mummers Officials and the city decided that the 2018 Mummers Parade will be held as scheduled on New Year’s Day. #mummers #mummersparade #philly pic.twitter.com/vck8aeVjbv