It has been one year since Sen. John McCain's brain cancer was discovered. What's next?

After year with cancer, what's next for McCain? 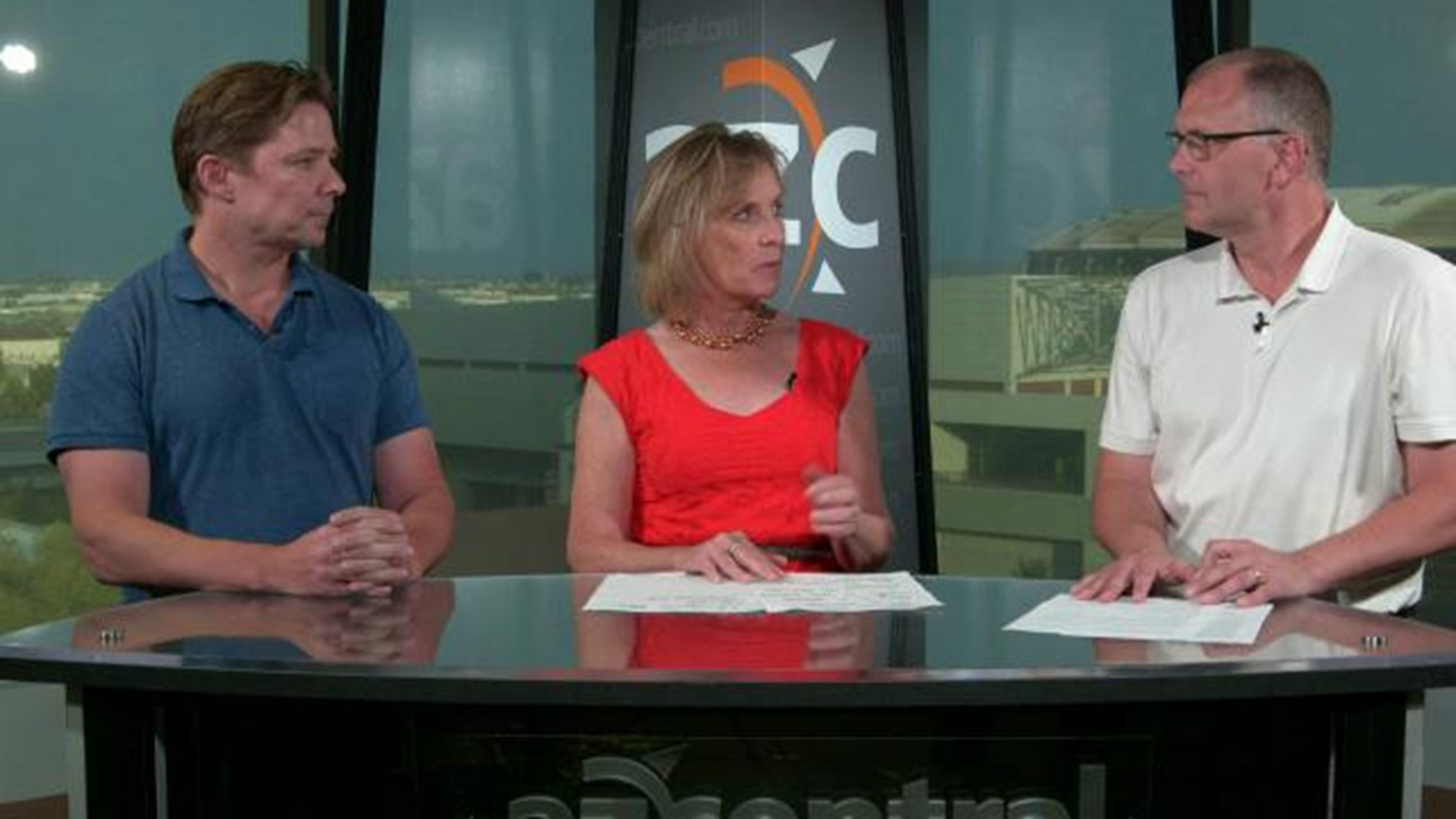 One year has passed since U.S. Sen. John McCain was diagnosed with a type of aggressive brain cancer that remains incredibly difficult to halt.

It is a mysterious — and complicated — milestone.

To some medical experts who do not treat McCain, the one-year anniversary suggests he may have a less-aggressive form of this deadly cancer, known as glioblastoma.

But it also could mean he is approaching the outer limits those with more serious forms can live.

McCain, 81, and those closest to him have not publicly revealed his long-term medical prognosis, but Cindy McCain, in a lengthy statement Thursday to The Arizona Republic, thanked the medical professionals at Mayo Clinic in Arizona and the National Institutes of Health and Walter Reed National Military Medical Center in the Washington, D.C., area, and the caregivers working with McCain at his family's Cornville retreat "for their superb care of John, and their amazing efforts to treat this terrible disease and its effects.

"That he is still with us one eventful year later, still working at getting stronger, still engaged in the life of his family and our country, is as much a testament to their dedication, skill, and compassion as it is to his fighting spirit," Cindy McCain said. "Thank you from the bottom of our hearts."

Cindy McCain went on to praise those "working diligently on many fronts and with encouraging results to find a cure for this disease" and to thank "our friends, John’s colleagues, and the thousands and thousands of Arizonans, Americans and people of good will on every continent, who have called and written to offer their assistance, their encouragement and their love for John."

To those "many generous souls, many of them strangers to us" who have shown the McCain family "such concern and decency," she added: "Thank you. You are in our hearts forever."

McCain had emergency surgery on July 14, 2017, to remove a brain tumor. On July 19, 2017, his office revealed that the tumor was associated with glioblastoma.

McCain has not set foot in Washington, D.C., since December. He continues his Senate duties as much as he can, from his family home in northern Arizona, 2,200 miles away from Washington, D.C. There, he occasionally weighs in on policy and media reports via Twitter, issues official written statements as he deems necessary and receives staff briefings. However, McCain cannot cast Senate votes by proxy or in absentia.

McCain’s prolonged absence from Capitol Hill has not ultimately doomed the Republican agenda, but has complicated the party's path for a reliable majority. His extended absence also has put front-and-center the question of whether he even could return to the floor given his age, frailty, and the cold, hard reality of the illness that he has battled.

The median survival time for glioblastoma patients who have surgery and standard treatment is 15 to 16 months.

"Most people on the one hand pray for a miracle, (but) on the other hand, know that miracles are rare," said John J. "Jack" Pitney Jr., a political scientist at Claremont McKenna College in Southern California. "I don't know if he'll return to the Senate. The odds seem to be against it."

Photos: John McCain through the years

And most politicians, "don't act like they believe in miracles. There's a lot of maneuvering going on in the expectation that he won't return," Pitney added, particularly during vote counts.

"They're assuming he is going to be absent from the Senate."

Medically speaking, it is positive for any glioblastoma patient to survive a year, said Nader Sanai, a neurosurgeon at Barrow Neurological Institute.

“When you reach that threshold, it suggests the tumor itself is not amongst the most aggressive subtypes of glioblastoma that we see," he said.

Brain-cancer patients face many challenges when they embark on their second year of treatment.

Drugs that worked during the first months or year may become less effective as malignant cells adapt and attack.

Aside from the tumor, patients must withstand the ravaging side effects of treatment, which leaves them, among other things, emotionally and physically fatigued.

“In our experience, different patients engage the challenge in different ways,” Sanai said. “For some patients, the logical step is to not change anything in their lifestyle.

“For other patients, it’s really a pivot point where a lot is changed deliberately to enhance quality of life … Everyone is different in where they are at in life, in terms of what’s behind them and what’s ahead of them.”

John McCain: A study in contradictions

It is unclear what type of medical care McCain is receiving.

The last official health update from McCain's office was in April, when he had surgery at the Mayo Clinic to treat an intestinal infection related to diverticulitis. Drugs such as steroids can suppress the immune system of someone with brain cancer, which can put them at greater risk for intestinal infections, particularly for patients in their 70s and 80s.

A statement from his office at the time said he was in stable condition and had been undergoing physical therapy at his Cornville home as he recovered from the side effects of cancer treatment.

Since then, his daughter, Meghan McCain has said McCain is doing well and has offered glimpses into his life there through social media posts, talk-show commentary and media interviews.

Earlier this month, McCain's former Senate chief of staff, Mark Salter, said McCain was back at his physical therapy in Cornville.

When he is up to it, McCain greets old friends who travel from across the U.S. to see him. Visitors have included longtime local friends, current and former U.S. senators, former Vice President Joe Biden and various staffers from his decades of public service.

Among other things, they talk politics, the transformation of the Republican Party under President Donald Trump, baseball and reminiscence about his 2008 presidential run.

From Cornville, he watches Meghan on ABC-TV's daytime talk show, "The View," which she co-hosts.

Experts say it is common for people with brain cancer, and their families, to reassess priorities and how they spend their days.

“They are more thoughtful about the time they spend with each other,” said Leticia Terry, the American Brain Tumor Association’s director of programs and outreach.

In his own words, McCain seems to be coming to terms with what lies ahead, whatever that may be. He has gratitude for every chapter of his life, he wrote in his 2018 political memoir, even the moments that, in retrospect, are less important now than they were at the time.

With advances in oncology, he may defy medical expectations, McCain wrote in "The Restless Wave: Good Times, Just Causes, Great Fights, and Other Appreciations," which Salter co-authored.

May 28: HBO's 'John McCain: For Whom the Bell Tolls' isn't a eulogy

“My predicament is, well, rather unpredictable,” McCain wrote. “A fight not joined is a fight not enjoyed, and I wouldn’t mind another scrap or two for a good cause before I’m a memory.

“Who knows, maybe I’ll get another round. And maybe I won’t. So be it.”

Given McCain's age and his own public statements about the "very poor" prognosis doctors gave him, it is unclear when or if he will ever return to Capitol Hill or the rigorous international travel schedule he was once known for.

There has been no widespread call for him to return or resign. His colleagues — Republicans and Democrats — have given him space to privately handle his uncertain future. His term expires in 2023.

Larry Sabato, the political scientist who directs the University of Virginia's Center for Politics, said no one in the U.S. Senate would completely rule out a return, given McCain's tough-as-nails character.

John McCain: From the Navy to Arizona senator

A Navy pilot, McCain was captured in 1967 after his plane was shot down over North Vietnam. He endured a brutal 5½ years as a prisoner that included interrogations and torture at the hands of his captors.

“If you’re asking me, do people think he’ll be back, the answer is ‘No,’ ” Sabato said. “Would people say that outright? No. And not because it’s uncivil, but because it’s John McCain.”

The 100-member Senate is a small body and is largely personality-driven. The removal or absence by any larger-than-life figure dramatically affects the entire chamber, said Don Ritchie, the Senate's former historian.

"To have somebody at the height of their powers — chairman of a committee, a national leader, a leader of their party — to lose that individual from the institution has a very big impact, and it takes a while for other senators to sort of step up to fill that void," Ritchie said.

He added, "The Senate is, in large part, a family. These days, it's sort of a dysfunctional family, but it's still a family. And when a senior member of the family becomes ill like that, it really does affect the institution."

There is a great sense of rallying around McCain, said Ritchie, just as there was around U.S. Sen. Edward Kennedy, D-Mass., his late colleague and collaborator on comprehensive immigration reform in the mid-2000s.

Kennedy died in 2009 of the same kind of brain cancer that McCain is fighting.

Brain cancer can be beat

The 34-year-old from Michigan had a grapefruit-sized tumor removed from his brain in March 2010 and was subject to radiation and one dozen cycles of oral chemotherapy.

“I had a lot of depression, or pessimism, about my future,” said Egan. The tumor robbed him of his vision when it crushed his optic nerve.

May 23: Hating McCain: Grant, Ted Kennedy and Nixon got a break at the end. But times change.

The treatment regime weakened him. Even a little movement would leave him exhausted. So he concentrated on learning software programs that allowed him to read despite being blind.

When he survived the first 18 months, the life expectancy for someone with his type of tumor, his outlook improved.

Today, Egan is cancer-free. He gets brain scans once a year to monitor for any signs that the tumor has returned. It has not.

Though blind, Egan completed his master’s degree in social work, resumed work and participates in peer counseling sessions with other brain tumor patients and their families.

He shares his story of hope and perseverance in the face of a statistical death sentence.

“Statistics are a lot of people who aren’t you,” Egan said.

May 12: In new book, John McCain says 'anyone can become an American if they embrace our values'