Democrats say voters should speak first, on Election Day, and the winner of the White House should fill the vacancy. 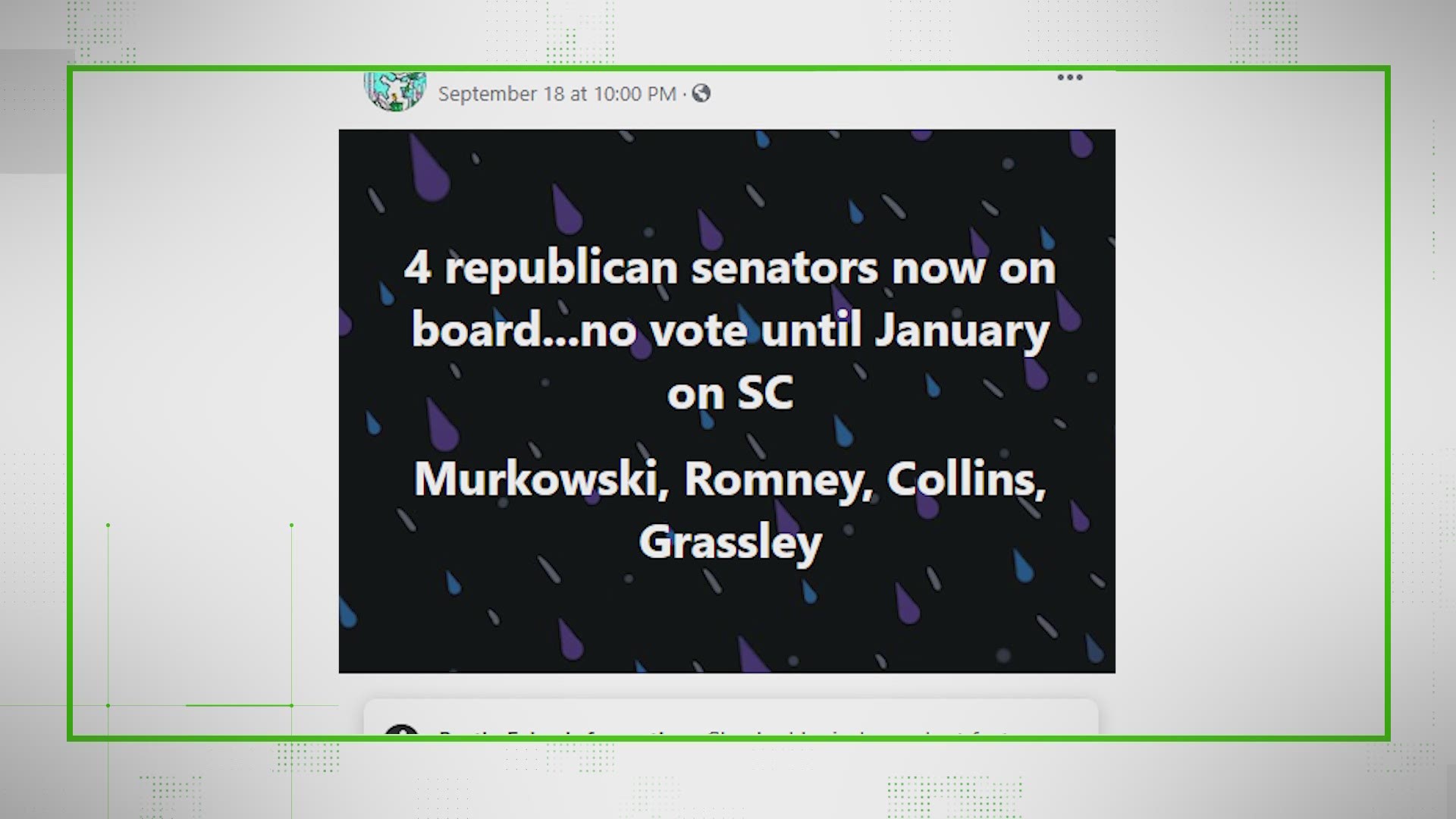 Votes in hand, Senate Republicans are charging ahead with plans to approve President Donald Trump’s pick to fill the late Justice Ruth Bader Ginsburg’s Supreme Court seat before the Nov. 3 election, launching their divisive confirmation fight over Democratic objections before a nominee is even announced.

Trump said Tuesday he will name his choice on Saturday at 5 p.m. Eastern, confident of support. Democrats say it's too close to the election, and the winner of the presidency should name the new justice. But under GOP planning, the Senate could vote Oct. 29.

“I guess we have all the votes we’re going to need,” Trump told WJBX FOX 2 in Detroit. “I think it’s going to happen.”

Republicans believe the court fight will energize voters for Trump, boosting the party and potentially deflating Democrats who cannot stop the lifetime appointment for a conservative justice . The Senate is controlled by Republicans, 53-47, with a simple majority needed for confirmation. The one remaining possible Republican holdout, Mitt Romney of Utah, said Tuesday he supports taking a vote.

Still, with early presidential voting already underway in several states, all sides are girding for a wrenching Senate battle over health care, abortion access and other big cases before the court and sure to further split the torn nation.

I will be announcing my Supreme Court Nominee on Saturday, at the White House! Exact time TBA.

It is one of the quickest confirmation efforts in recent times. No court nominee in U.S. history has been considered so close to a presidential election. And it all comes as the nation is marking the grave milestone of 200,000 deaths from the coronavirus pandemic.

During a private lunch meeting Tuesday at Senate GOP campaign headquarters, several Republican senators spoke up in favor of voting before the election. None advocated a delay.

Elsewhere, as tributes poured in for Ginsburg with vigils and flowers at the court’s steps, Democrats led by presidential nominee Joe Biden vowed a tough fight. The Senate Democratic leader, Chuck Schumer, said that “we should honor her dying wish,” which was that her seat not be filled until the man who wins the presidential election is installed, in January.

But that seemed no longer an option. So far, two Republicans have said they oppose taking up a nomination at this time, but no others are in sight. Under Senate rules, Vice President Mike Pence could break a tie vote.

Senate Majority Leader Mitch McConnell made no scheduling announcements. But hearings could start as soon as Oct. 12 by the Senate Judiciary Committee, with a vote in the full Senate by Oct. 29, according to a GOP aide granted anonymity to discuss deliberations. McConnell said more information would be coming once Trump announces his choice.

After Trump met with conservative Judge Amy Coney Barrett at the White House on Monday he told reporters he would interview other candidates and might meet with Judge Barbara Lagoa when he travels to Florida later this week. Conversations in the White House and McConnell’s office have been increasingly focused on Barrett and Lagoa, according to a person granted anonymity to discuss the private deliberations.

Barrett, 48, a judge on the U.S. Court of Appeals for the 7th Circuit, has long been favored by conservatives. Those familiar with the process said interest inside the White House seemed to be waning for Lagoa amid concerns she did not have a proven record as a conservative jurist. Lagoa has been pushed by Florida's governor, and aides tout her political advantages of being Hispanic and hailing from the key political battleground state.

Democrats point to hypocrisy in Republicans trying to rush through a pick so close to the election after McConnell led the GOP in refusing to vote on a nominee of President Barack Obama in February 2016, long before that year’s election.

Romney, the GOP's 2012 presidential nominee, dismissed that argument, saying “it was not unfair” for Republicans to refuse to consider Obama’s choice of Merrick Garland.

The Utah Republican backed up his decision by saying it’s not “written in the stars” that the court should have a liberal bent. He said Trump's pick will tip the court to become more conservative, and he said that is appropriate “for a nation which is, if you will, center right, to have a court which reflects a center right point of view.”

At the private lunch, Sen. Mike Braun of Indiana said, senators advocating swift voting warned of “too many complications” if the process is delayed until after the election — presumably if Biden wins the White House or Republicans lose the Senate.

Credit: AP
President Donald Trump speaks to reporters on the South Lawn of the White House, Monday, Sept. 21, 2020, before leaving for a short trip to Andrews Air Force Base, Md., and then onto Ohio for rallies. (AP Photo/Andrew Harnik)

Conservative groups pushing for swift approval also argue the election result could be disputed with legal battles dragging on for weeks.

Democrats say voters should speak first, on Election Day, and the winner of the White House should fill the vacancy. Biden appealed to GOP senators to “uphold your constitutional duty, your conscience” and wait until after the election.

But few Republicans are willing to cross Trump. The president has criticized Republican Sens. Susan Collins of Maine and Lisa Murkowski of Alaska for opposing a Senate vote before elections. Trump warned they would be “very badly hurt” by voters in November.

Collins went further Tuesday saying she would vote against Trump's pick, “not because I might not support that nominee under normal circumstances but we’re simply too close to the election.”

Republicans anticipate an election-year boost from the debate over abortion, healthcare and other issues before the court. “These sorts of fights bring Republicans together,” said Sen. Todd Young, R-Ind., the party's Senate campaign chairman.

At a memorial on the National Mall marking the 200,000 COVID deaths, House Speaker Nancy Pelosi paid tribute to Ginsburg and warned against Trump's coming court challenge to the Affordable Care Act. “It’s a time for us to vote health," she said.

The mounting clash over the vacant seat injects new turbulence in the presidential campaign with the nation still reeling from the coronavirus pandemic and shattered economy, with millions unemployed and heightened partisan tensions and anger.

Ginsburg, 87, died Friday of metastatic pancreatic cancer. She will lie in state at the U.S. Capitol this week, the first woman accorded that honor. Her casket will be on view Wednesday and Thursday on the steps of the high court.

No nominee has won confirmation so quickly since Sandra Day O’Connor — with no opposition from either party — became the first woman to serve on the Supreme Court in 1981.