Snowstorm buries Northwest, with more on the way

More than a foot of snow was recorded in some areas of Washington state, including on the Olympic Peninsula. 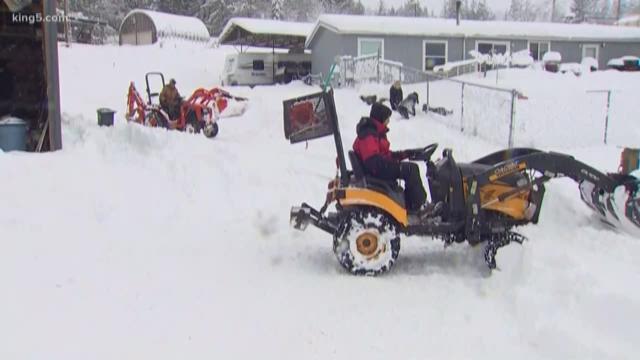 SEATTLE — Residents of the Pacific Northwest took to neighborhood hills with skis, sleds or even just laundry baskets Saturday to celebrate an unusual dump of snow in a region more accustomed to winter rain.

Some areas received more than a foot of snow, and meteorologists say more is on the way early next week. Hundreds of flights were canceled in Seattle and Portland, and heavy snow drifts closed major highways in eastern Washington. Around 50,000 people lost power.

Residents cleared out grocery store shelves and left work early Friday afternoon as the storm arrived. More than a foot of snow (30.5 cm) was recorded by Saturday morning in some areas, including on the Olympic Peninsula, in the nation's latest bout of winter weather.

In Tacoma, hundreds of people turned out for a snowball fight in a park after someone who lives nearby suggested it on Facebook. They took cover behind picnic tables and used sleds as shields.

"This is a perfect morning to bundle up and play in the snow, but stay off the roads if possible," Gov. Jay Inslee wrote on Twitter.

In central Washington, blowing snow and drifts 3 to 4 feet (0.9 to 1.2 meters) deep forced the closure of U.S. 2 and Interstate 90. The Grant County Sheriff's Office warned that snow drifts were blocking many roads. Airports in eastern Washington closed, and numerous car crashes were reported. 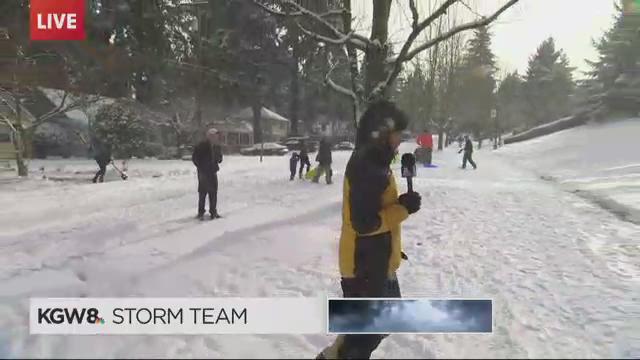 The National Weather Service said additional snow could fall Saturday, and another storm was expected early next week.

About 180 people spent the night at an emergency shelter set up at Seattle Center, with officials going out again on Saturday to get other homeless residents to safety. Inslee declared a state of emergency over the storm. The state transportation department said crews had to clear several trees that had fallen across roads in the Tacoma area.

Credit: Scott Terrell/Skagit Valley Herald via AP
Kylie Silvia, 7, of Sedro-Woolley slides down a hill Saturday, Feb. 9, 2019, at the Northern State Recreation Area while being chased by Atlas, one of the two family dogs.

In Portland, a tanker truck slid into a sport-utility vehicle on an interchange between Interstates 5 and 84 on Saturday, blocking the ramp for hours.

Other parts of the country were also wrestling with difficult weather. Residents of Hawaii were bracing for coastal flooding amid extreme surf predictions. A California man died in rough waters off of Maui on Friday, Hawaii News Now reported.

In California, more than 120 visitors and staff members were rescued Thursday after being trapped by up to 7 feet (2 meters) of snow in a Sierra Nevada resort for five days.

Credit: AP
People taking part in a public snowball fight stand in front of a picnic-table shield, Saturday, Feb. 9, 2019, at Wright Park in Tacoma, Wash. Hundreds of people showed up after word of the friendly battle spread on social media Friday night and Saturday, as a winter storm that blanketed Washington state with snow moved south into Oregon and meteorologists warned that yet more winter weather was on the way. (AP Photo/Ted S. Warren)

Another winter storm was on the way to the region.

In Yosemite National Park, as many as 50 housing structures near Half Dome Village were damaged by trees toppled during a snowstorm earlier this week, displacing more than 160 employees who provide food, lodging and other services for visitors. 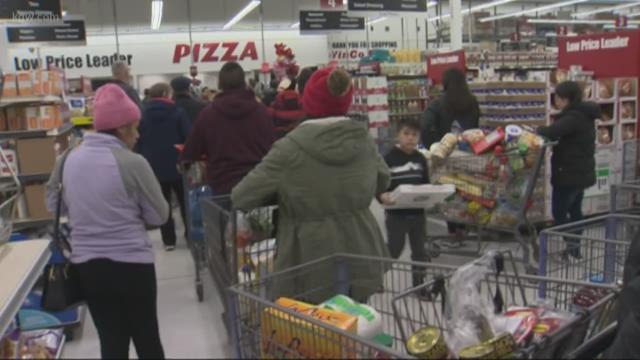 In Washington, about 50,000 people lost power. In Seattle, snowfall from Sunday and Monday lingered into the week as below-freezing temperatures gripped the area. A 59-year-old man died Thursday from exposure at a Seattle light rail station.

Residents in Portland and Seattle who are more accustomed to rain than snow waited in long lines to buy shovels and de-icer.

Autumn Sang was at a mobbed grocery store in Tualatin, Oregon, on Friday stocking up for the coming storm for herself and her neighbor, who is disabled and doesn't have a car. 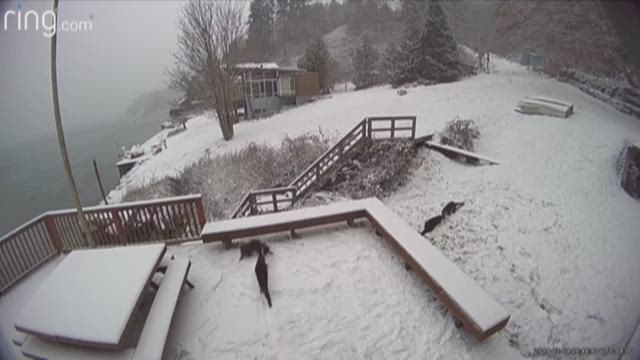 Sang said she had never seen the store so crowded. She grew up in southern Oregon, where snow is more common, and wasn't fazed by the forecast.

"I love it. I'm excited about it," she said of the snow. "I think that Portlanders, most of them are city people and they come from a lot of different places, so they're not so used to it. It's like, 'Use your brain! If you don't have to go out, don't go out.' "