The tornado left a swath of destruction 10 miles long in the suburbs north of Birmingham. 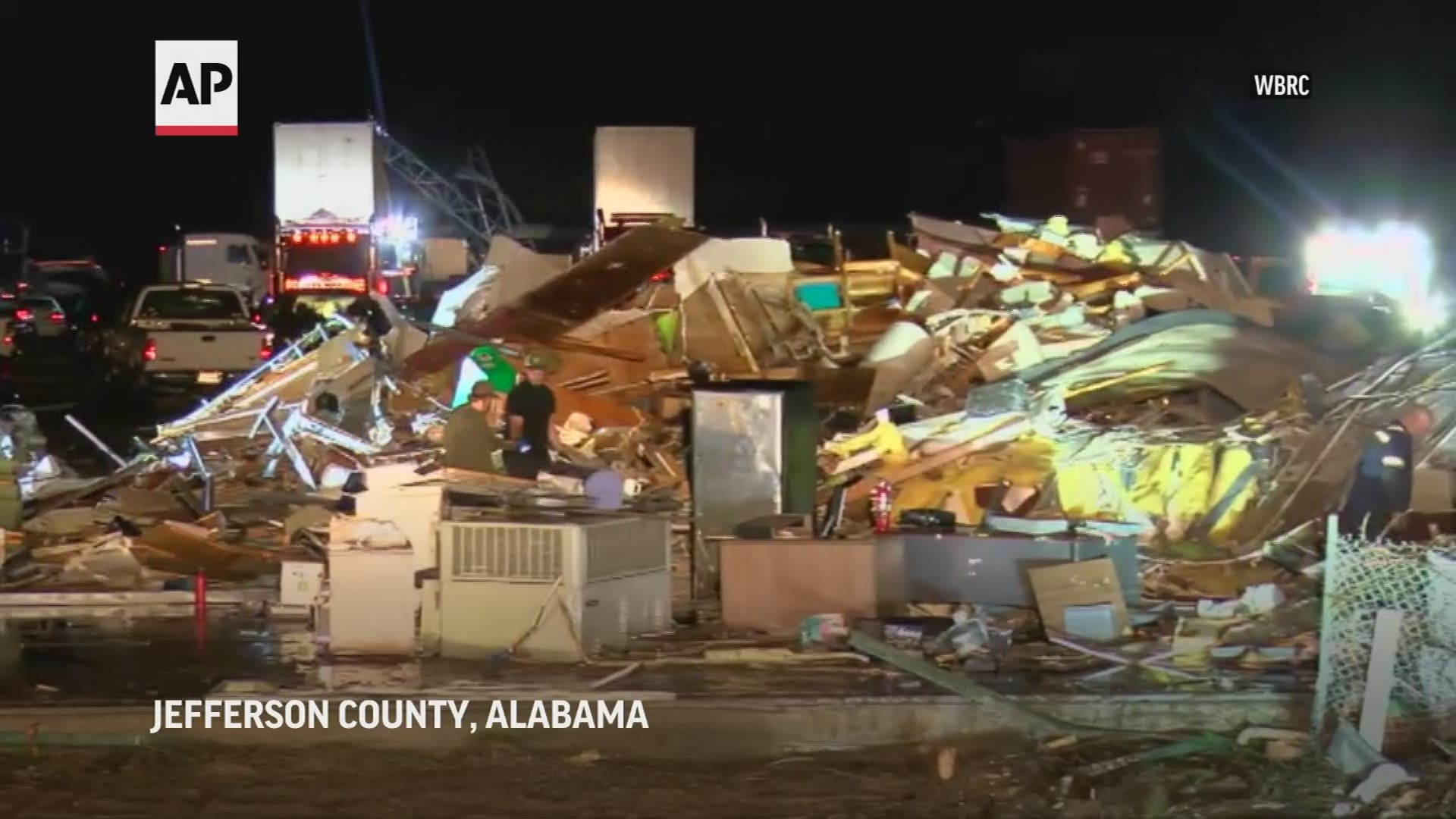 BIRMINGHAM, Ala — A teenager sheltering in his basement was killed and several family members were critically injured when a tornado blew a tree onto their home in Alabama, police said Tuesday.

The twister injured at least 30 people overall as it carved a 10-mile (16 kilometer) path of destruction Monday night in the northern suburbs of Birmingham. It struck an area severely harmed by a much larger tornado a decade ago.

Pieces of buildings, furniture, appliances and trees were strewn about and vehicles ended up in awkward positions, as if a child had scattered a collection of Matchbox cars. One car landed upside down against some tree branches on a large pile of debris.

The teen was pronounced dead at the scene Tuesday morning, and several of his family members were critically injured when their home collapsed, trapping them in the basement, Fultondale Police Chief D.P. Smith said.

“They were doing what they were supposed to be doing,’′ the chief said.

The teenager killed was a 14-year-old in the ninth grade, according to Jefferson County Superintendent Dr. Walter Gonsoulin. He said they're trying to determine how many students may be homeless now. Fultondale High School was so heavily damaged that he doubts students can return to classrooms this year.

Video of tornado producing storm moving north of Birmingham from my back deck. @JerryWVTM13 @WVTM13 pic.twitter.com/3hNS53EubZ

“Every building on this campus had been touched,” Gonsoulin said.

Search and rescue efforts continued in neighborhoods where it was difficult to tell where houses had stood. Across the wrecked landscape, every visible structure was damaged or destroyed. Pieces of buildings and children's toys and clothing were scattered across the hilly terrain littered with broken trees. Utility lines had fallen on roadways. Some houses had entire roofs missing.

The sound of chainsaws sliced through the cool sunny morning and a helicopter circled overhead.

Tim and Patti Herring ran to their bathroom when they got the warning that a tornado was headed their way. It struck moments later, ripping away their roof and two sides of their home while they huddled in the bathtub.

“I could feel stuff falling down and hitting me, but we’re OK,” Tim Herring said.

Shaken and teary, Patti picked through the debris looking for a missing cat and her late mother's cherished belongings.

Credit: AP
Patti Herring sobs as she sorts through the remains of her home in Fultondale, Ala., on Tuesday, Jan. 26, 2021, after it was destroyed by a tornado. (AP Photo/Jay Reeves)

Fultondale Fire Chief Justin McKenzie said 30 people were injured and 18 of those had to go to hospital. Search and rescue crews are going from home to home and checking the rooms of a heavily damaged hotel. Six people were pulled uninjured from damaged structures Tuesday morning.

Jason and Renee Williams and their two teenage daughters huddled in a basement storm shelter as the twister destroyed their house. The family survived with only bumps and bruises, but were missing several pets.

A broken pipe spewed water into the air Tuesday morning as Jason Williams and some volunteers helped free their dog Smokey from the remains of the basement where the animal had been trapped. He climbed down a ladder and was able to hoist the dog to safety.

“I’m just so proud that Smokey is OK. One of my daughters had some guinea pigs and the other one had a turtle. and I cant find them. I just found part of the guinea pig cage,” he said.

Video from New Castle Rd. near Oak Street. Residential area. Firefighter tells me more than 20 homes destroyed in this area by possible tornado. Most homes reduced to subfloor.

The county's emergency management agency tweeted that several schools would be closed Tuesday for both traditional and remote students, including Fultondale High, Center Point High and Clay-Chalkville High.

“The people of Fultondale took a hard hit last night — I’m grieved over the loss of life, injuries, homes & damaged businesses," Alabama Gov. Kay Ivey said on Twitter early Tuesday. “I offer my prayers & deepest sympathies & pledge the full support & resources our state has to offer. I am with you, Fultondale!”

Fultondale also caught the tail end of an EF- 4 tornado that ripped across Alabama from Tuscaloosa to northern Jefferson County on April 27, 2011, killing 65 people and injuring 1,500 along a damage path more than 80 miles (129 kilometers) long, according to the National Weather Service.

Weather Service survey crews have yet to confirm this twister's estimated strength, but FEMA described it as a “large tornado."

“Sadly, here in Fultondale we are very experienced with this kind of thing,” McKenzie said.

After blowing across Georgia, the storms were rolling over the Carolinas around dawn. Boaters on Lake Murray near Columbia were warned to seek harbor as winds of up to 50 mph were moving through, the National Weather Service said in a statement early Tuesday.