Trump says he'd rather ralliers don't chant 'Send her back!'

At his last rally, the president let the chant about Rep. Ilhan Omar roll, expressed disapproval about it the next day and later retreated from those concerns. 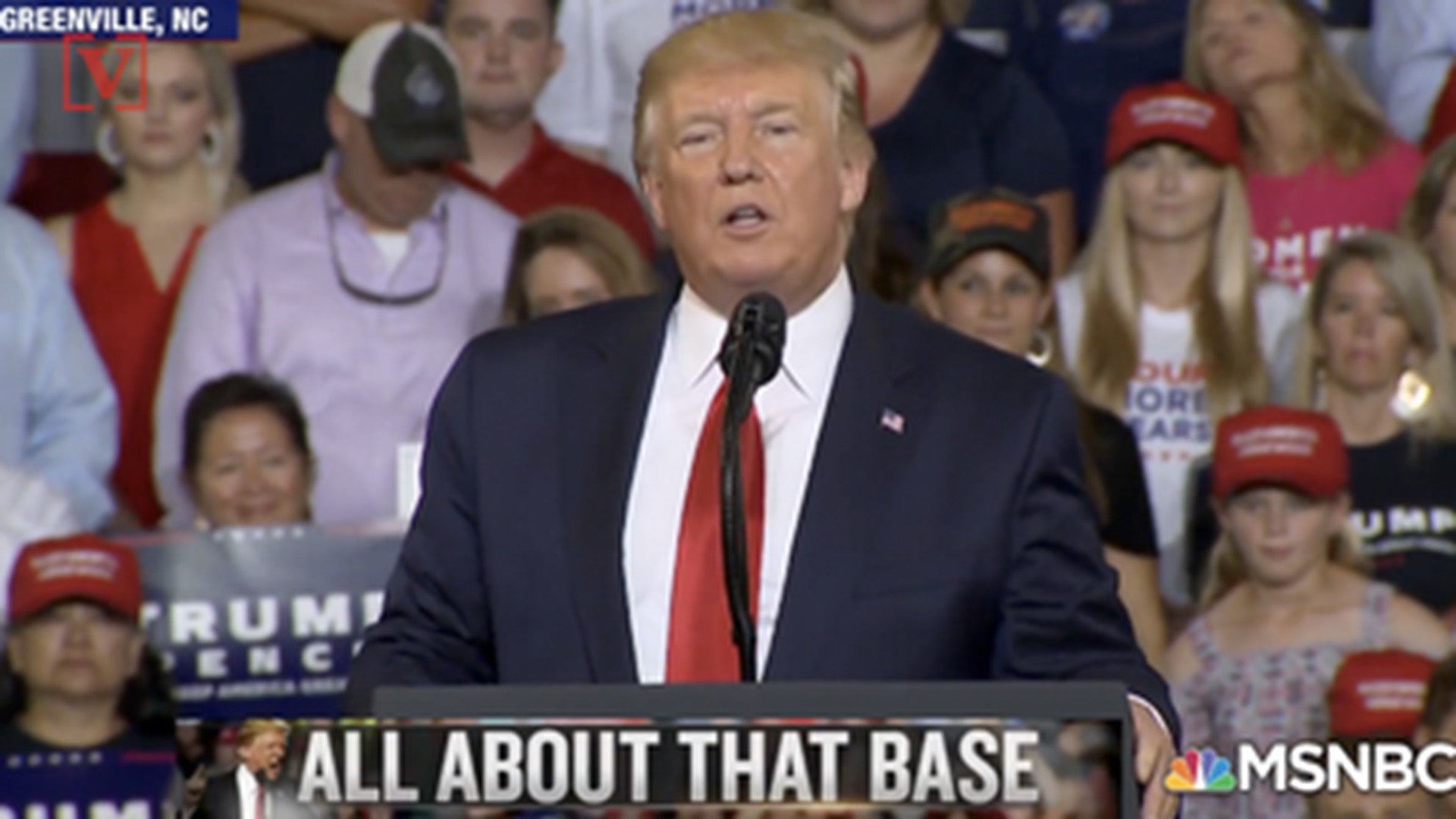 CINCINNATI — President Donald Trump said he would "prefer" that his supporters a rally Thursday night don't engage in a "Send her back!" chant about a Somali-born congresswoman, after he faced widespread criticism for not doing more to stop the attack on Rep. Ilhan Omar at an event two weeks ago.

Speaking to reporters before leaving the White House for Cincinnati, Trump said he doesn't know whether they will chant anyway, or what his response would be if they do — adding that, regardless, he "loves" his political supporters.

"I don't know that you can stop people," Trump told reporters. "If they do the chant, we'll have to see what happens."

The chant about the Minnesota Democrat by a roaring Greenville, North Carolina, crowd last month rattled Republicans and raised the prospect of a 2020 presidential campaign increasingly fought along racial lines. It followed racist tweets Trump sent against Omar and three other first-term lawmakers of color, instructing them to get out of the U.S. "right now" and saying if the lawmakers "hate our country," they can go back to their "broken and crime-infested" countries.

Two weeks ago, Trump wavered in his response to the divisive cries, letting the chant roll at the rally, expressing disapproval about it the next day and later retreating from those concerns.

Since then, Trump has pushed ahead with incendiary tweets and a series of attacks on a veteran African-American congressman and his predominantly black district in Baltimore. Heightening the drama, Trump's Ohio rally will come on the heels of a pair of debates among the Democrats who want to replace him and will take place against a backdrop of simmering racial tension in the host city of Cincinnati.

All eyes will be watching both the Ohio crowd's behavior and how Trump reacts. Even his closest advisers seem uncertain as to what may transpire.

"If it happened again, he might make an effort to speak out about it," Vice President Mike Pence said recently.

Republican Rep. Steve Chabot, who represents a Cincinnati-area district, said Wednesday he hopes the crowd will avoid such chants this time, and he thinks Trump will react more quickly if does happen.

"I would discourage the crowd from doing anything inappropriate and I think saying something like that would be inappropriate," Chabot said. "I would hope that the president would silence the crowd, tell them: 'Hey, don't do that, there's no place for that. It's not helpful, it's not right.'"

Long accused of weaponizing race for political gain, Trump has escalated his harsh language in recent weeks, beginning with racist tweets about Omar, the Minnesota congresswoman who moved to the United States as a child, and her Democratic House colleagues Alexandria Ocasio-Cortez of New York, Rashida Tlaib of Michigan and Ayanna Pressley of Massachusetts.

Days later, the Greenville crowd's "Send her back!" shouts resounded for 13 seconds as Trump paused in his speech and took in the uproar.

Democrats condemned the scene and GOP lawmakers scrambled to denounce it lest the moment come to define their party heading into the next election. Though not faulting Trump himself, House Minority Leader Kevin McCarthy of California said the chant had "no place in our party and no place in this country."

After first saying he wasn't happy about the chant, Trump in subsequent days praised the "patriots" in the North Carolina crowd. Since then, he has not backed off his criticism of the congresswomen of color, and instead launched repeated attacks on Rep. Elijah Cummings and the city of Baltimore, describing the majority-black city as a "living hell."

Trump's reelection campaign did not respond to questions about whether the president or campaign staffers would try to prevent the chant from erupting Thursday in the same downtown Cincinnati arena that housed one of Trump's most raucous 2016 rallies.

Ohio Gov. Mike DeWine said Wednesday that he found Trump's comments about the congresswomen "inappropriate" but added that he would not raise the matter with the president.

"If Trump allows his supporters to hijack his own rally, that does not bode well for the rest of his campaign," said Alex Conant, a Republican strategist who worked on Marco Rubio's 2016 campaign. "If he encourages the chant, it would be divisive for the country and for the Republican Party."

Conant added: "I'd hope to see him steer clear of anything that could evoke the chant. And if his supporters began chanting it anyway, and he shut it down, I think he would appear strong and get some bipartisan praise."

Trump captured Ohio by nearly 9 percentage points in 2016, and he fared somewhat better among midterm voters in Ohio than among voters in Rust Belt neighbors Michigan and Wisconsin. About half of Ohio voters, 49%, expressed approval of Trump's job as president, according to AP VoteCast, a survey of the electorate in 2018. Forty-four percent of voters in Michigan, and 43% of voters in Wisconsin, approved of Trump.

Several protests are planned around the Trump rally, including one at the nearby National Underground Railroad Freedom Center. It focuses on the slavery era and current struggles against injustice around the world.