Donald Trump said Sunday the US killed the world’s most wanted terrorist leader, and Monday tweeted a photo of a dog involved in the operation. 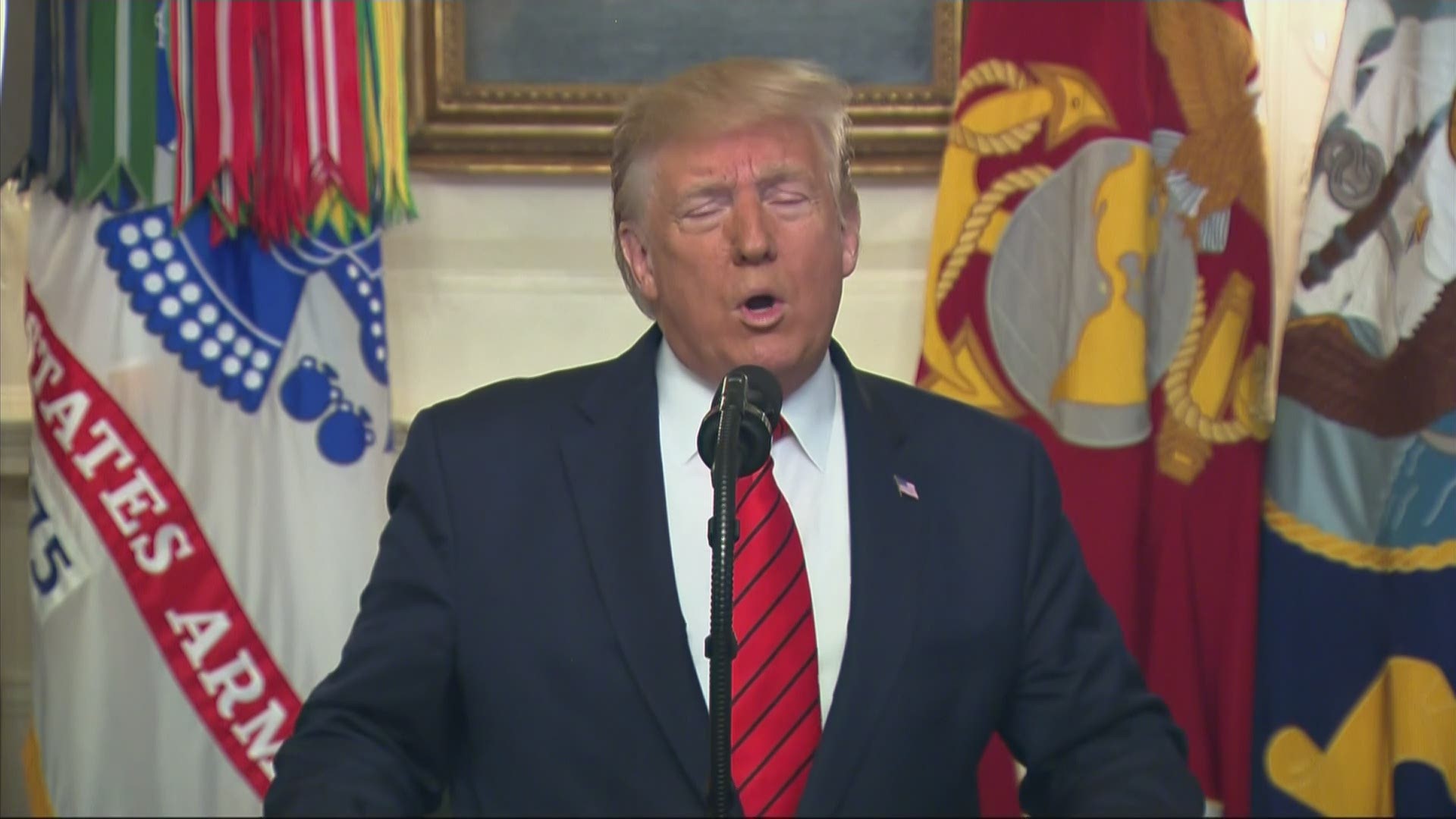 WASHINGTON — President Donald Trump says the U.S. military raid that took out Islamic State leader Abu Bakr al-Baghdadi is a bigger deal than the 2011 killing of Osama bin Laden during the Obama administration.

Trump detailed the operation Sunday morning during an announcement at the White House. The president acknowledged that the death of al-Qaida leader bin Laden was significant, but he believes the news about al-Baghdadi is even bigger.

Trump says that bin Laden didn't become a global name in terrorism until the attacks of Sept. 11, 2001. The president says that's in contrast to al-Baghdadi, who he says is responsible for building a caliphate.

The president says al-Baghdadi died after running into a dead-end tunnel and igniting an explosive vest, killing himself and three of his young children. He says debris from the tunnel where he blew himself up in using an explosive vest made it difficult to get to his body.

RELATED: North Korea says it's running out of patience with US over nuclear diplomacy

The president tweeted this declassified photo of a dog that the U.S. government says was involved in the capture and killing of the ISIS leader, Abu Bakr al-Baghdadi. The dog's name remains classified.

House Speaker Nancy Pelosi is criticizing the White House for failing to notify congressional leaders before the U.S. raid in Syria. She notes that the U.S. let Russia know the raid was in the works.

Trump said U.S. military helicopters flew over territory controlled by Russian and Syrian forces before landing at Abu Bakr al-Baghdadi's compound. He also said he kept lawmakers out of the loop because he was fearful of leaks.

Pelosi says the Trump administration must brief Congress on the operation and on the administration's overall strategy for the Mideast.

Before the 2011 raid in Pakistan that killed Osama bin Laden, the Obama administration did give advance word to the top two Democrats and Republicans in the House and Senate as well as the four leaders of the congressional intelligence committees.

Trump says European nations have been a "tremendous disappointment" in what he says is their unwillingness to bring home captured Islamic State fighters from their home countries. He's renewing his threat to release imprisoned fighters at their borders.

The president has repeatedly and publicly pressed Europe to take back their large numbers of imprisoned fighters, but that push has been met by some resistance.

The U.S. has said it wants to lead by example and several captured fighters have been returned to America for prosecution.

RELATED: House Democrats get a legal victory in impeachment inquiry

The Russian Defense Ministry is expressing skepticism about President Donald Trump's announcement that Abu Bakr al-Baghdadi has been killed.

The ministry says in a statement that there were no recorded airstrikes in the Idlib zone on Saturday where the operation is said to have taken place.

The Russian statement says the ministry is unaware of "any alleged assistance to the passage of American aircraft into the airspace of the Idlib de-escalation zone during this operation."

It also suggested that al-Baghdadi's presence in that area would be unlikely because the territory is controlled either by the Syrian government or by an al-Qaeda affiliate that is an IS rival.

On CBS' "Face the Nation," Vice President Mike Pence disclosed more details about the raid. He said that by Thursday afternoon, he and President Donald Trump had learned that there was "a high probability" that al-Baghdadi would be at his compound in Syria's Idlib province.

Pence said that Trump directed commanders to come up with military options and present them to him on Friday morning. By Saturday morning, "we received the actionable intelligence" that allowed the operation that Trump had approved to go ahead, the vice president said.

Credit: AP
This file image made from video posted on a militant website Saturday, July 5, 2014, purports to show the leader of the Islamic State group, Abu Bakr al-Baghdadi, delivering a sermon at a mosque in Iraq during his first public appearance.

Trump says those involved in the raid "brought body parts" back with them, even though there "wasn't much left" of al-Baghdadi's body. He says "they have his DNA. More of it than they want."

He said that watching the raid that killed al-Baghdadi as it was underway felt "as though you were watching a movie." And he's suggesting that the video be released to the public to dissuade al-Baghdadi's followers.

Trump says that he watched much of the mission unfold from the White House Situation Room on Saturday night. He says the U.S. had al-Baghdadi under surveillance for several weeks and that during the raid, American forces flew low and fast, and were met with gunfire at points.

Trump suggested that the world should know al-Baghdadi spent his final moments "crying, "whimpering" and "screaming."

The president had teased the announcement with a tweet Saturday night, declaring that "Something very big has just happened!"

He says the U.S. received immediate and positive identification on the body and that the world is now a much safer place.

Trump said in a statement to the nation from the White House's Diplomatic Room that "al-Baghdadi is dead" — fulfilling the top national security priority of his administration.

The announcement comes as Trump has been on the receiving end of bipartisan criticism in Washington following the recent pullback of U.S. troops from northeastern Syria. Critics fear that move will allow the militant group to regain strength after it had lost vast stretches of territory it had once controlled.

A senior Turkish official had said that "to the best of my knowledge," Abu Bakr al-Baghdadi arrived at a location in Syria 48 hours before the U.S. military raid that's believed to have targeted the Islamic State group leader.

The Turkish official says in a written statement Sunday that there's been "close coordination" among relevant parties and that the Turkish military had advanced knowledge of the raid.

Turkey's army said earlier in a tweet that it had "information exchanged and coordination" with U.S. military authorities before the operation.

The U.S. raid with helicopters took place in the Barisha area north of Idlib city — a few kilometers from the Turkish border.

Credit: AP
This file image made from video posted on a militant website Saturday, July 5, 2014, purports to show the leader of the Islamic State group, Abu Bakr al-Baghdadi, delivering a sermon at a mosque in Iraq during his first public appearance.

Abu Bakr al-Baghdadi, the shadowy leader of the Islamic State group, had a $25 million U.S. bounty on his head.

He'd kept a low public profile in recent years, releasing only sporadic audio recordings. In a recording just last month, he called on members of the extremist group to do all they could to free IS detainees and women held in jails and camps.

That purported audio was his first public statement since last April, when he appeared in a video for the first time in five years.

The video included images of the IS leader sitting in a white room with three others. He praised Easter Day bombings that killed more than 250 people and called on militants to be a "thorn" against their enemies.

RELATED: José Andrés, a staunch Trump critic, will throw the first pitch at Game 5, with Trump in attendance