A week after a major earthquake rattled Alaska, the state's transportation department is the envy of a nation for its speed at repairing roads. 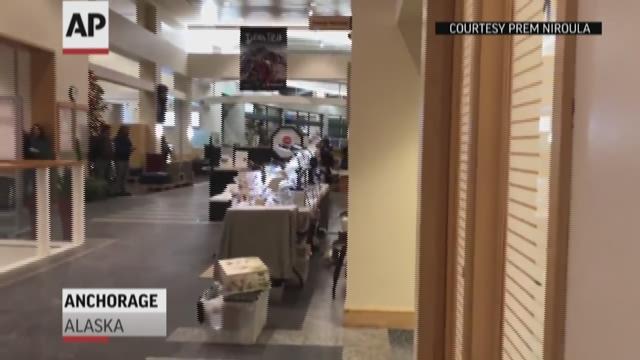 Unless you're the Alaska Department of Transportation and Public Facilities.

A week after a major earthquake rattled Alaska, a magnitude-7.0 tremor that's been followed by more than 3,000 aftershocks, the state's transportation department has become the envy of a nation for the speed of its work — even if its repairs aren't permanent.

Department spokesperson Shannon McCarthy told USA TODAY on Thursday that crews repaired most major road damage within four days — with before and after photos of an off-ramp near Ted Stevens Anchorage International Airport emerging as a social media sensation.

The photos, shared on Facebook by Alaska Tour & Travel, had garnered 1,100 comments and been shared more than 17,000 times as of Thursday night.

"Wow!! Other states could certainly learn from this. Way to go Alaska!!" one person wrote.

"That is unbelievably awesome! Hooray for the Alaskan people! Wish repairs went that fast in Texas," another Facebook user said.

"It would take California years to get this done," another posted.

The DOT's work, though, isn't done. The repairs completed since the Nov. 30 earthquake, in unfavorable winter conditions, are temporary solutions to avoid transit complications and crews will redo the majority of their work in the summer to ensure long-term sustainability, McCarthy said.

It took about 72 hours of around-the-clock work to restore that northbound off-ramp near the airport, McCarthy said. A total of 14 people worked the project: seven laborers, five truck drivers and two project engineers. It was the first ramp that the department began reconstructing, with workers on-site just three hours after the quake.

Crews faced freezing rain, light snow, high winds and temperatures that dropped to the high 20s. Usually, Alaska only does construction from May through September when conditions are more favorable for long-lasting repairs. The biggest challenges, McCarthy said, lied in the asphalt and frozen soil.

No asphalt plants run during non-peak months because cold temperatures solidify the oil while rain and snow add moisture. So, instead, a department worker called a contractor to start reheating asphalt two hours after the earthquake, McCarthy said.

Because areas of the road sunk and cracked apart, workers had to grind up the damaged asphalt, remove bad material, bring new material and compact the frozen soil. Then they paved and painted it.

It reopened at 1:30 a.m. Tuesday, with the southbound exit for the airport opening an hour or two later.

In the summer, McCarthy said construction crews would typically need a full two months for a similar project.

“Since Friday’s earthquake, DOT&PF employees and Alaska contractors have worked tirelessly to re-establish essential transportation links,” Gov. Mike Dunleavy said in a statement. “Regardless of the challenges, they have committed to finding solutions in record time.”

Emergency declarations from the president and the governor, McCarthy said, expedited repairs. Support from the Federal Highway Administration also helped, as well as planning conscious of how Alaska gets more earthquakes than any other state.

"We're all really pleased that we were all able to come together and anticipate what our challenges were early on during the disaster," McCarthy said. "Within that first hour or two, we were really anticipating what we were going to need in five days."

The department is continuing repairs to smaller damaged spots, including ruptures that shut down a lane. Throughout the winter, it will also monitor temporary repairs.