Here's what was verified as true and false during President Trump's State of the Union address and the Democratic response. 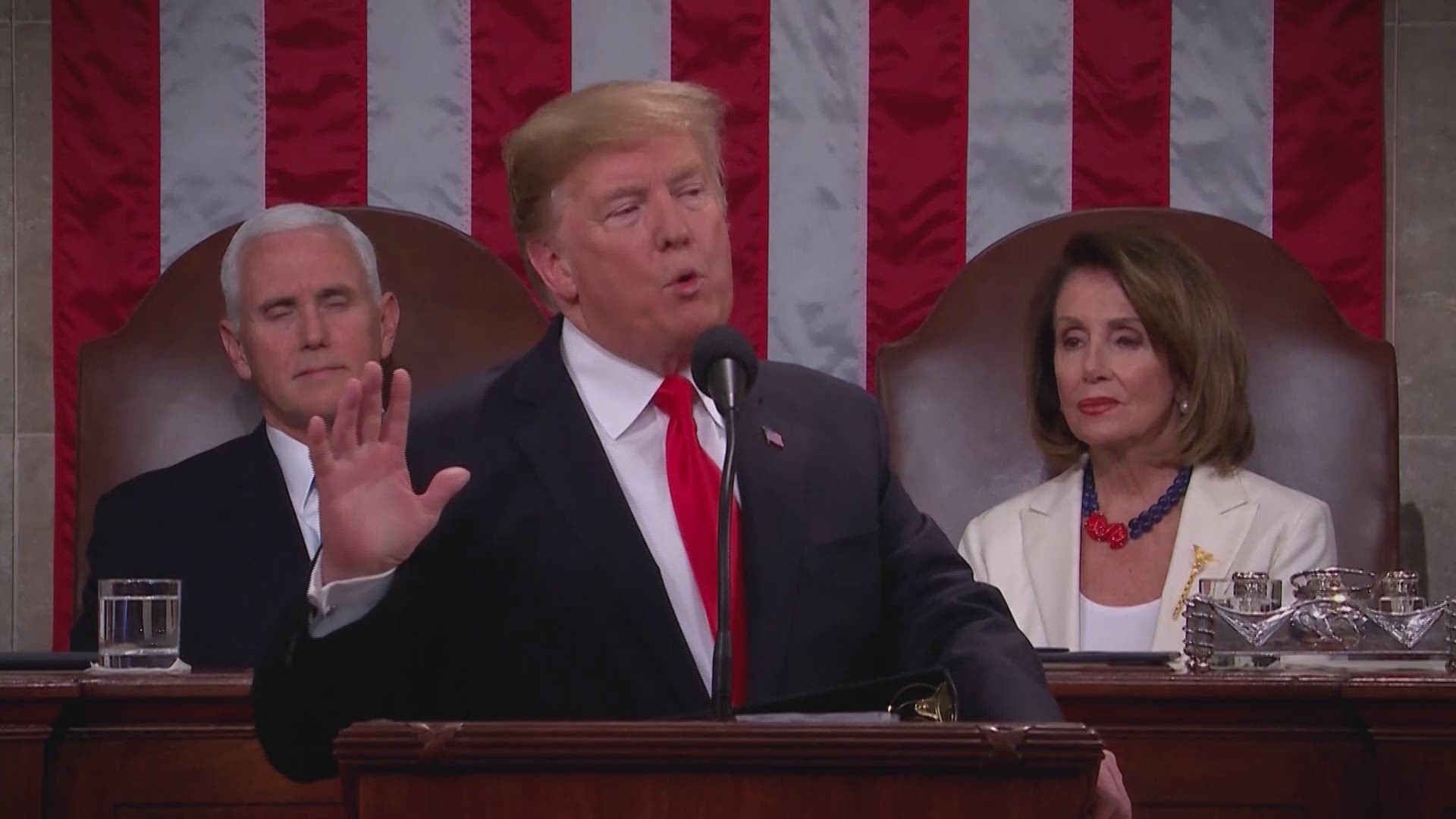 Speaking before the American people and members of Congress in the Capitol, President Donald Trump gave his State of the Union address on Tuesday night. He was followed by former Georgia gubernatorial candidate Stacey Abrams who gave the Democratic response.

Our VERIFY researchers fact-checked both of their claims and statements in real-time:

“Agents will tell you, where walls go up, illegal crossings go way down.”

From 2000 to 2017, apprehensions dropped by 80 to 90 percent in border zones, according to data from the U.S. Customs and Border Patrol.

ICE officers arrested 250,000 immigrants in 2017 and 300,000 immigrants in 2018 that they deemed as “criminal,” according to the agency's own reports. It is important to note that the ICE databases also include non-violent crimes, which includes illegal entry. So if an immigrant previously attempted crossing the border, ICE would consider that a crime. ICE reported that between 2017 and 2018 there were a combined total of 99,207 assaults, 27,331 sex-related crimes and 3,914 homicides committed by the apprehended individuals.

"Our brave troops have now been fighting in the Middle East for almost 19 years."

The U.S. launched its intervention in Afghanistan, operation “Enduring Freedom,” on Oct. 7, 2001. So the U.S. has been “fighting in the Middle East” for almost 18 years.

“Our hostages have come home, nuclear testing has stopped, and there has not been a missile launch in 15 months.”

North Korea and its leader, Kim Jong Un, haven’t tested any ballistic missiles since Nov. 29, 2017. But Lisa Collins, a fellow with the Korea Chair at the Center for Strategic and International Studies, said that the country could still conduct scientific research and computer simulations on weapons of mass destruction without launching a missile. 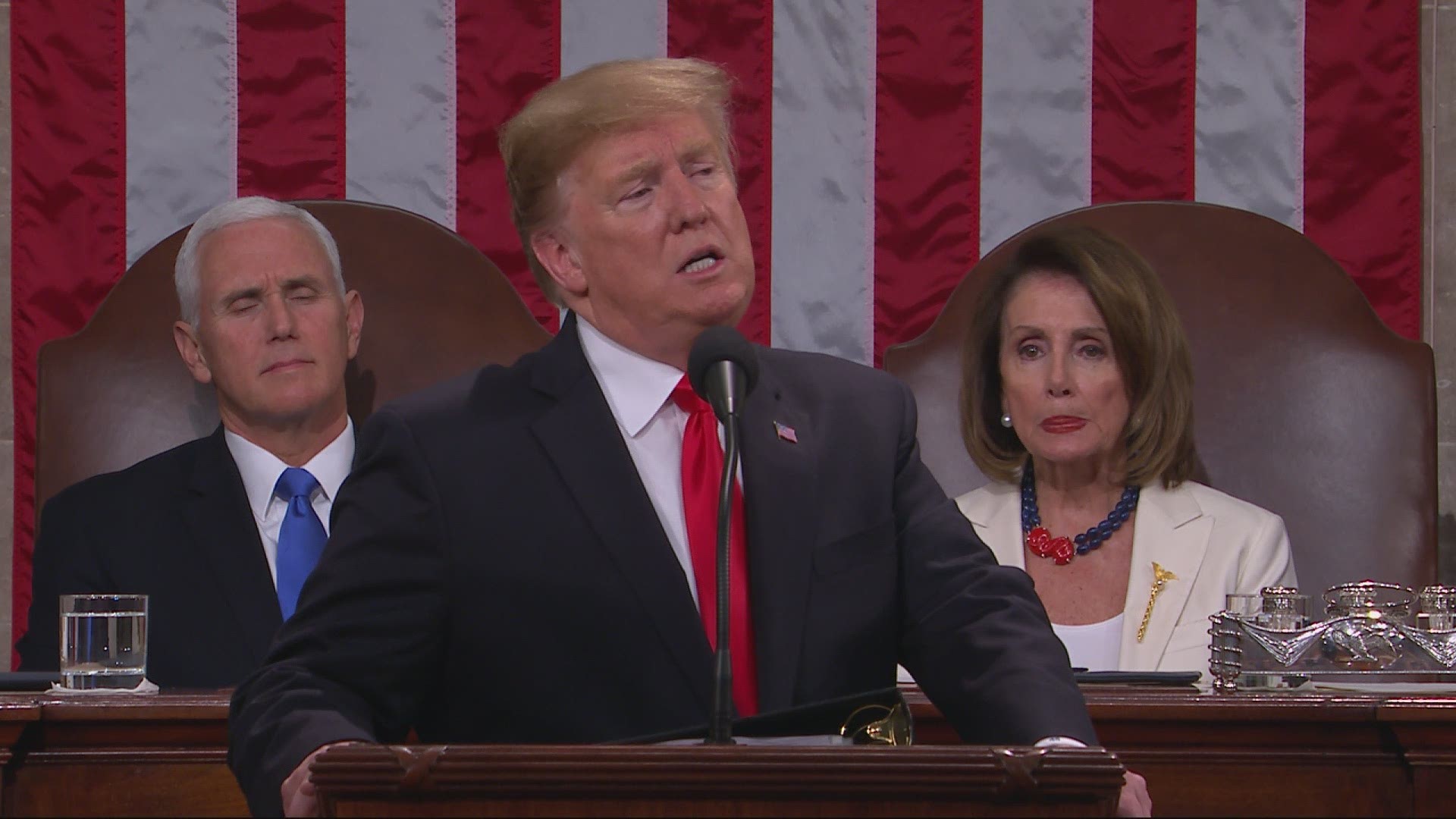 "In just over two years since the election, we have launched an unprecedented economic boom – a boom that has rarely been seen before. We have created 5.3 million new jobs...."

Trump was elected in November 2016, and this statement started with "since the election." If you include December 2016 and January 2017, the number of jobs added is just over 5.3 million, according to the Bureau of Labor Statistics.

But Trump did not take office until January 20, 2017, so his administration would not be officially responsible for job gains and losses until then. Since the end of January 2017, the economy added 4.9 million new jobs. 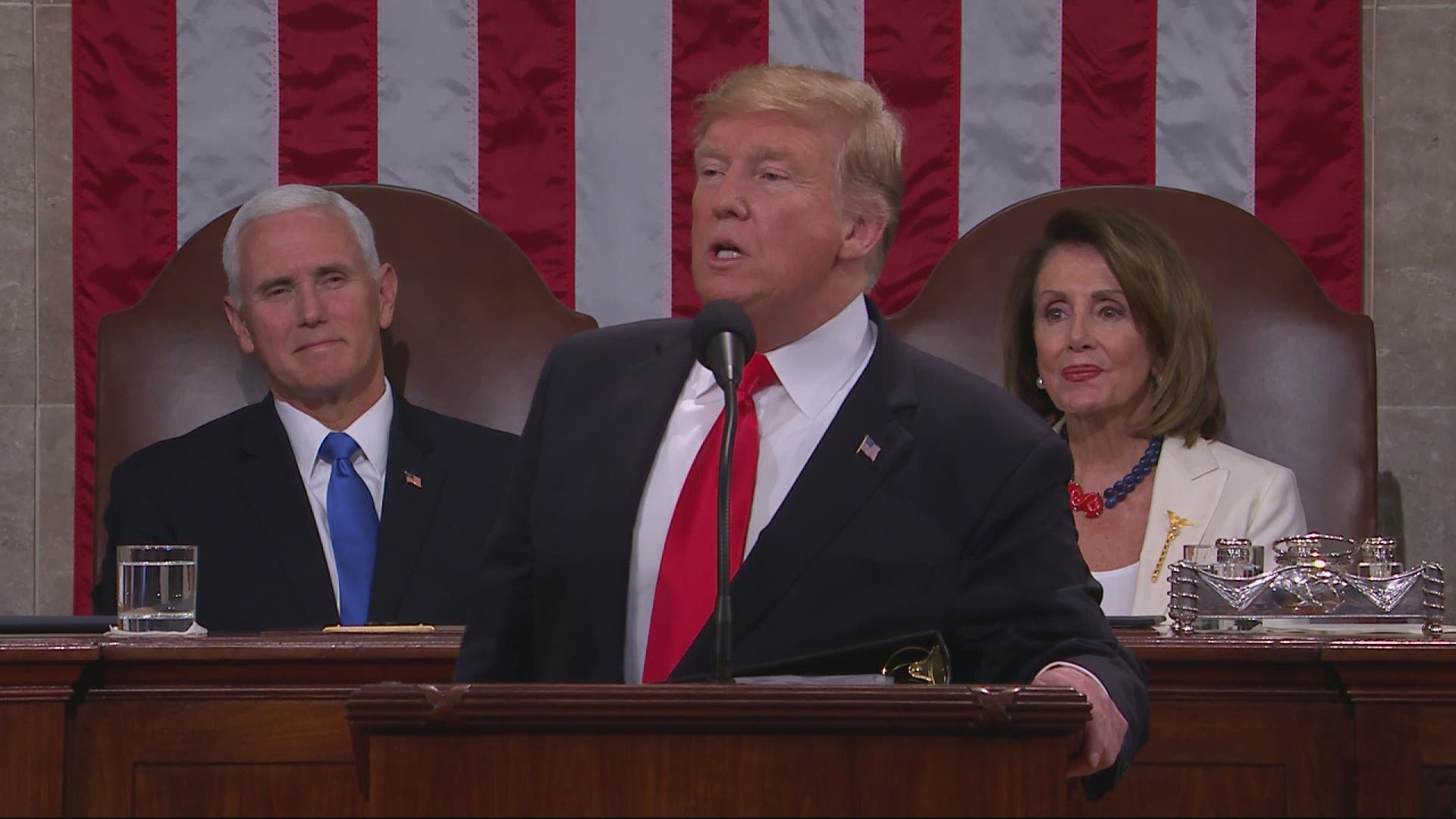 “We have secured a $100 billion increase in defense spending from NATO allies.”

NATO Secretary General Jens Stoltenberg confirmed that allies would increase spending by $100 billion in a speech on Jan. 30.

"Since 2016, NATO allies across Europe and Canada have increased defense spending by $41 billion, and by the end of 2020, by the end of next year, I expect this figure to rise to $100 billion. So this is showing the commitment of all NATO allies, and the strength of our alliance and the importance of strengthening our collective defense," said Stoltenberg.

"When I took office, ISIS controlled more than 20,000 square miles in Iraq and Syria. Today, we have liberated virtually all of that territory from the grip of these bloodthirsty killers."

The defeat of ISIS is not just thanks to the U.S. According to Chief Pentagon spokesperson Dana White, a coalition liberated more than 20,000 square miles of previously held ISIS territory in Syria. That coalition, the State Department said, is made up of 79 countries, all partnering to defeat ISIS.

"All Americans can be proud that we have more women in the workforce than ever before."

"The United States is now the number one producer of oil and natural gas in the world."

The U.S. has been the top producer of natural gas since 2009 when it surpassed Russia, according to the Energy Information Administration. A report released last year by the independent energy statistics agency said the U.S. produced more crude oil than Saudi Arabia and Russia in 2018 to become the world’s top producer.

“We have just heard that Mexican cities, in order to remove the illegal immigrants from their communities, are getting trucks and buses to bring them up to our country in areas where there is little border protection.”

CLAIM 1: Mexican cities are busing migrants in order to remove them from their communities.

The government of the Mexican state of Coahuila announced Monday it transported 1,700 migrants of a caravan in 49 buses from the southern capital of Saltillo to the town of Piedras Negras, across the border from Eagle Pass, Texas. The migrants were escorted by immigration officials as well as military personnel to warehouses-turned-shelters.

In their statement, the government said migrants expressed their intentions of reaching Piedras Negras before arriving at Saltillo. Therefore, migrants were not being “removed” from cities but instead transported.

The government of Mexico has offered some fleeing Central Americans work and travel permits valid for one year while they resolve their immigration status, including asylum requests in Mexico.

The latest caravan to reach the southwest border arrived Monday to Piedras Negras across the border from Eagle Pass, Texas with roughly 1,700 migrants.

“Little border protection” is subjective depending on the available resources. Out of nearly 30 miles of border it shares with Mexico, Eagle Pass has 1.2 miles of border fence that extends from south of downtown westward. Customs and Border Protection agents man the three ports of entry and patrol agents work in between the ports. This is in addition to technology, including cameras and sensors, deployed by the Department of Homeland Security.

In addition to federal border security, Texas governor Greg Abbott has mobilized the National Guard and the Texas Department of Public Safety troopers to the area, according to a tweet he sent Tuesday. However, it’s not clear how many as numbers are rapidly fluctuating.

Abrams: "The price of higher education grows ever steeper." 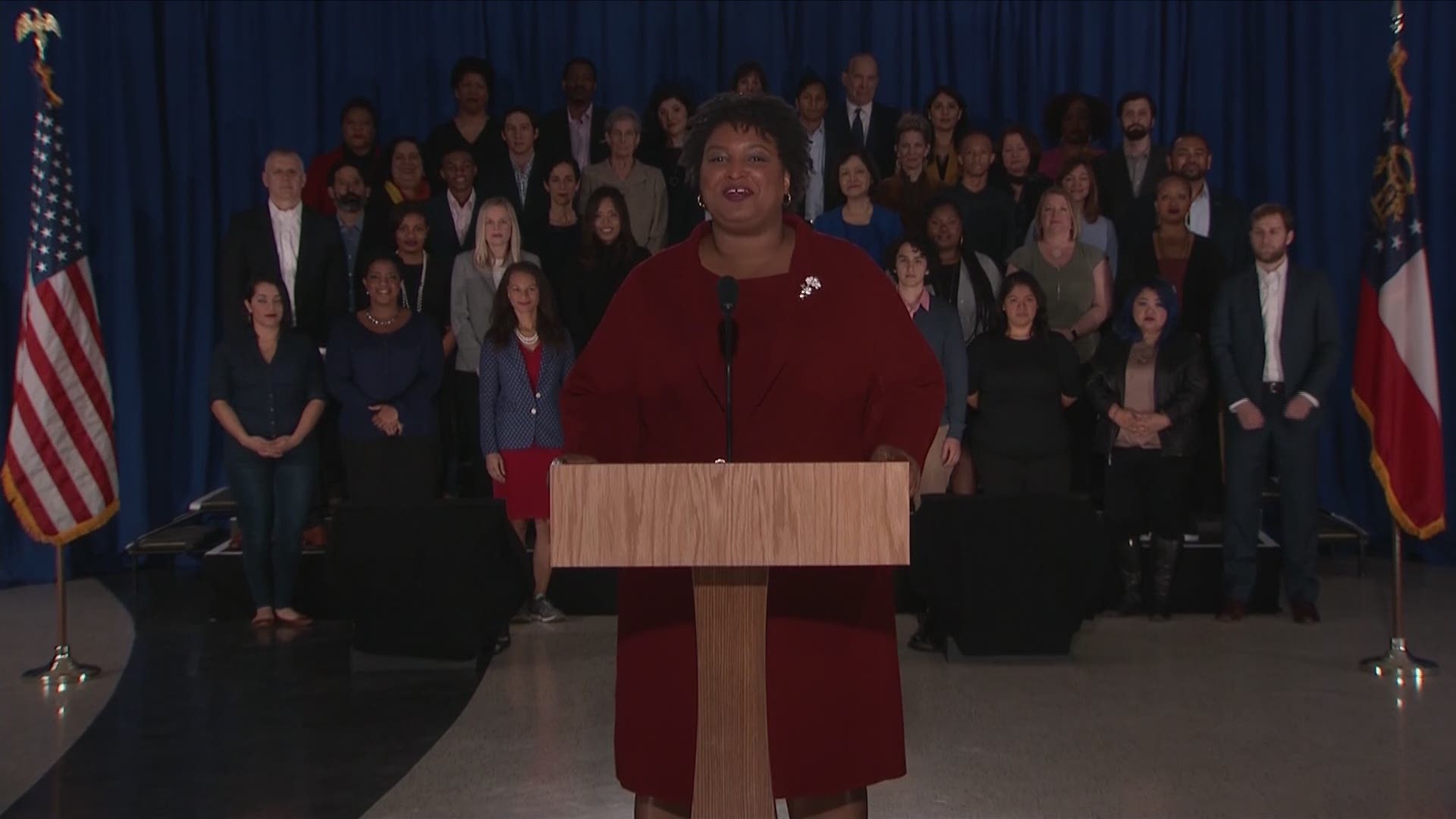 Abrams: "Hard-working Americans are falling behind, living paycheck to paycheck, most without labor unions to protect them from even worse harm."