Trump's remarks come just hours before members of the House and Senate gather at the Capitol to accept the vote of the Electoral College. 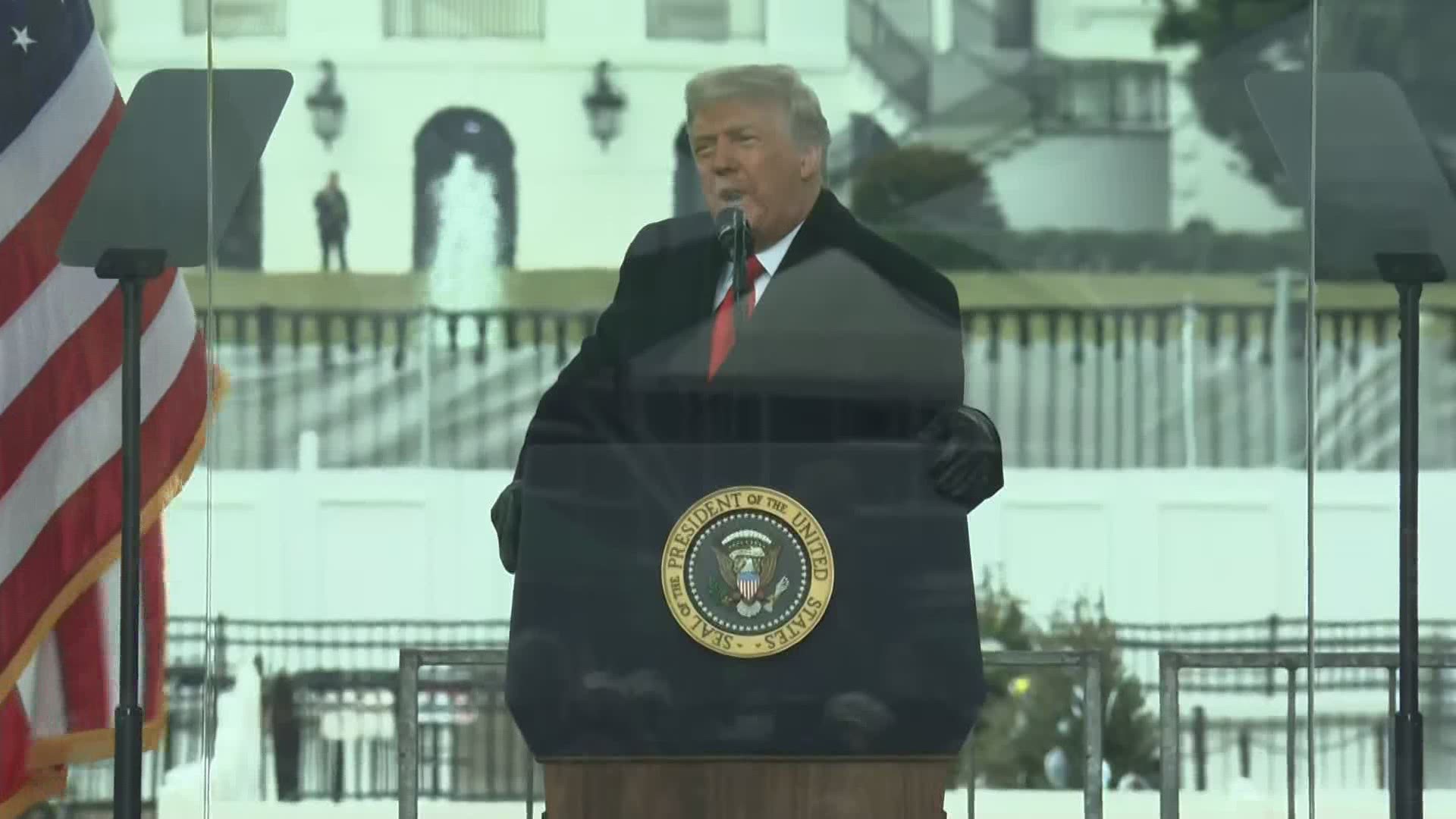 President Donald Trump is vowing that “we will never concede” as he speaks to supporters shortly before Congress is to convene for a joint session to confirm the Electoral College vote won by President-elect Joe Biden.

Trump took the stage at the Save America rally, which drew thousands of supporters who swamped the nation’s capital as the president’s Republican allies in the House and Senate plan to object to his November election loss to Biden.

Trump urged Vice President Mike Pence, who will play a largely ceremonial role in the process, to block certification of Biden’s win. Pence does not have this power.

“Our country has had enough,” Trump said. “We won’t take it anymore.”

As Congress prepared to affirm President-elect Joe Biden's victory, thousands of people lined up before sunrise Wednesday to show their support for Trump and his baseless claims of election fraud.

Trump was expected to address his supporters later in the morning during a rally on the Ellipse, just south of the White House.

Lou Murray, a life insurance salesman from Boston, said he and many others still hoped Congress and Vice President Mike Pence would not certify the vote. “I hope Vice President Pence has courage today and I hope any politician who thinks he has a future shows courage to stand up and do what's right,” Murray said.

Organizers planned an afternoon march to the Capitol, where Congress will be voting to affirm the Electoral College results, which Trump continues to dispute.

A number of prominent Trump supporters were expected to attend the protest events, which began Tuesday with a rally at Freedom Plaza near the White House. They include Texas Attorney General Ken Paxton and longtime Trump ally Roger Stone, the recipient of a pardon by the president.

As temperatures dropped to the low 40s Tuesday night and a steady rain swept onto the streets, hundreds of protesters remained in Freedom Plaza.

“I’m just here to support the president,” said David Wideman, a 45-year-old firefighter who traveled from Memphis, Tennessee. Wideman acknowledged he was “confused” by a string of losses from Trump's legal team in their attempt to overturn the results of the election and didn’t know what options Trump had left.

“I not sure what he can do at this point, but I want to hear what he has to say," Wideman said.

Trump tweeted his support for the protesters: “Washington is being inundated with people who don’t want to see an election victory stolen by emboldened Radical Left Democrats. Our Country has had enough, they won’t take it anymore! We hear you (and love you) from the Oval Office."

RELATED: VERIFY: If both chambers of Congress object to votes for Biden, do the electoral votes go to President Trump?

In a Tuesday evening tweet, Trump called on Democrats and fellow Republicans to look at the “thousands of people pouring into D.C.” In another tweet, he warned that antifa, the umbrella term for leftist militant groups that Trump has said he wants to declare a terrorist organization, should stay out of Washington.

The rallies had local officials and law enforcement bracing for potential violent street clashes. Many businesses in downtown Washington boarded up their windows, fearful that the protest could devolve into the unrest seen in May and June when dozens of businesses were vandalized.

District of Columbia Mayor Muriel Bowser called in National Guard troops to help bolster the city’s police force. She urged residents to stay away from downtown Washington and to avoid confrontations with anyone who is “looking for a fight.” But, she warned, “we will not allow people to incite violence, intimidate our residents or cause destruction in our city.”

Election officials from both political parties, governors in key battleground states and Trump’s former attorney general, William Barr, have said there was no widespread fraud in the election. Nearly all the legal challenges from Trump and his allies have been dismissed by judges, including two challenges rejected by the Supreme Court.

A pro-Trump rally Dec. 12 ended in violence as hundreds of Trump supporters, wearing the signature black and yellow of the Proud Boys, a far-right extremist group, sought out confrontations with a collective of local activists attempting to bar them from Black Lives Matter Plaza, an area near the White House. At least two local Black churches had Black Lives Matter banners torn down and set ablaze.

On Monday, police arrested the leader of the Proud Boys, Henry “Enrique” Tarrio, 36, after he arrived in Washington before this week’s protests. Tarrio was accused of burning one of the Black Lives Matter banners in December and was found with two high-capacity firearm magazines, police said. A judge signed an order Tuesday banning Tarrio from entering the District of Columbia, with very limited exceptions related to his criminal case.

In addition to the National Guard, federal agents were on standby, in case they were quickly needed in the city this week.

The federal Bureau of Prisons said about 100 “specially trained officers” were sent to the Justice Department headquarters to assist other security personnel but would remain “in a reserve capacity unless needed.”