The Nationals beat the Astros in Game 7 to bring the first baseball championship to Washington since the Senators won the World Series in 1924. 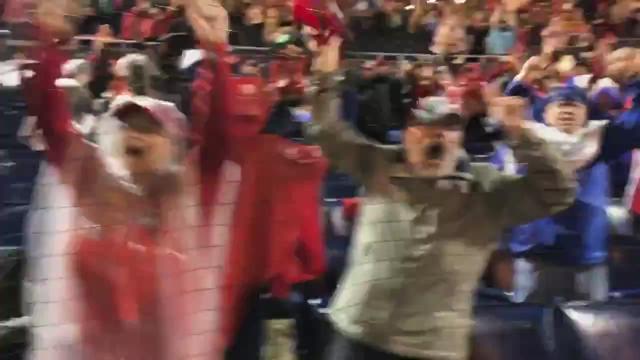 The Washington Nationals defeated the Houston Astros 6-2 in Game 7 of the World Series Wednesday night to win the franchise’s first MLB title since moving to the nation's capital in 2005.

After seven months and one of the most memorable playoffs in recent memory, the 2019 season culminated with the Nats' victory Wednesday night at Minute Maid Park in Texas.

In a series in which the road team won each game, the Astros and Nationals ended up in a winner-take-all contest.

The Astros were seeking their second World Series title in the past three seasons. But Washington's win marks the city's first baseball championship since the Senators won the World Series in 1924.

After missing his scheduled Game 5 start on Sunday, Nationals ace Max Scherzer took the mound on Wednesday, while Zack Greinke toed the rubber for the Astros.

Washington rallied late to not only get on the scoreboard but take the lead too, following home runs by Anthony Rendon and Howie Kendrick in the seventh inning, along with an insurance RBI from rookie Juan Soto to make it 4-2 after the eighth.

Adam Eaton's 2-RBI single to center field in the ninth brought the score to what would be the final, 6-2.

The Nationals offense seemed to struggle against a cruising Greinke up until the seventh, when Rendon's 374-foot jack put Washington on the board.

Greinke walked Soto before leaving the game to Will Harris, who allowed the go-ahead 2-run homer to Kendrick.

Greinke went 6.1 innings before his evening ended, and he was solid most of the way, tossing only 80 pitches.

Scherzer’s night finished after he threw 103 pitches through five innings, giving up seven hits and two runs while striking out three.

Houston struck first to open the scoring, with the Astros jumping on Scherzer early through Yuli Gurriel’s solo shot to lead off the second inning. The 389-foot home run gave Houston the 1-0 lead, which increased to 2-0 in the fifth by way of Carlos Correa’s big 2-out RBI single.