Son recognized his father's handwriting on a Navy sea bag 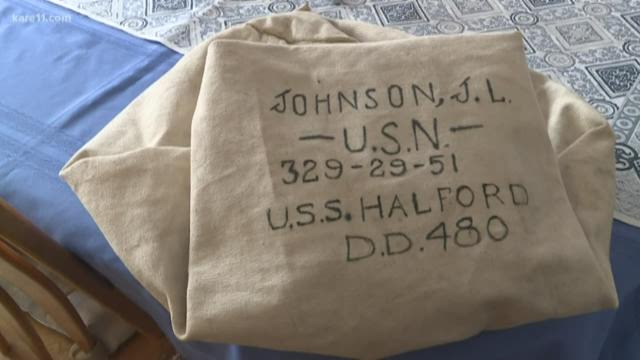 LAKEVILLE, Minn. — From baseball to beer cans, Wayne Johnson is always on the hunt.

“I've been collecting things for a lot of years,” the retired Minneapolis police officer said.

So, nothing new that Johnson would be on Facebook Marketplace last Saturday night scrolling through collectibles, when he stumbled on a WWII navy sea bag inscribed with hand-written information about the sailor who once owned it.

“That's what caught my eye was the writing, not the bag,” Johnson said.

It didn’t take long for Johnson to reach a conclusion. “Oh my God,” he shrieked. “That's my dad's bag!”

Johnson's dad - Johnny Johnson - had served aboard the destroyer USS Halford during WWII.

He also wrote his J’s with a distinctive hook end.

“I knew it was his,” Wayne Johnson said.

To be certain, Johnson cross-referenced the service number on the bag with his dad’s military records.  They were a perfect match.

Johnny Johnson passed away nearly two decades ago, but neither his son nor wife has any recollection of ever having seen the bag.

So, where was it all those years?

The woman who posted the bag for sale offered some insight.

“I got it at a garage sale I think, or an estate sale,” Cindy Olson said from her home in Elk River.

Olson said for “20 years or so” she used the sea bag to store her family’s sleeping bags.

Johnson pondered not telling Olson the reason he wanted the bag, for fear she would jack up the price.

“But my wife’s like, ‘Just be honest, tell her it belonged to your dad.’ And I thought, that’s what my dad would say,” Johnson said.

He need not have worried.

“My father and that bag went through a lot together,” he said.

One thing is certain, the sea bag won't be traveling anymore.

“No, it won't be leaving the family,” Johnson said.  “Why he didn't he keep his bag I don't know.  But we've got it now thanks to a very nice lady.”

MORE BOYD HUPPERT: Outpouring of support for teacher dressing his class for success