Many of the planes will land nowhere near the game, but instead at nearly a dozen other airports across Minnesota. 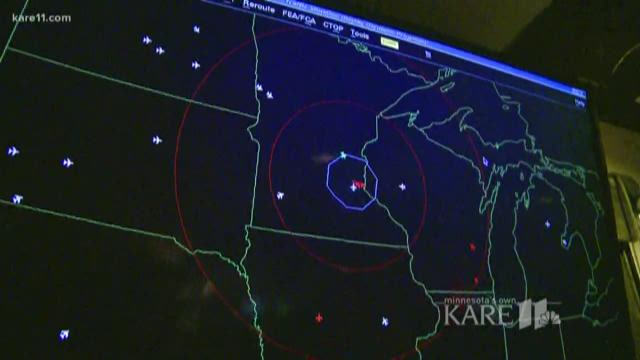 MINNEAPOLIS - Somewhere between 1,100 and 1,600 extra airplanes are expected to fly in for the Super Bowl this week.

Many of the planes will land nowhere near the game, but instead at nearly a dozen other airports across Minnesota.

"Minneapolis itself can only handle about 200 to park here," traffic management officer Kurt Mara says.

"We reached out early on to start talking to those other airports."

The other airports being as close as St. Paul and Eden Prairie, and as far away as Duluth and La Crosse.

Mara says the FAA is using a reservation system to ensure planes can land and take off in an orderly fashion.

Several flights have already been scheduled to come in on Wednesday and Thursday, but Mara says a majority of the flights will land and take off within a few hours of the big game.

To help them handle the load, the FAA will issue a Temporary Flight Restriction (TFR) for Sunday night.

The TFR will restrict planes from taking off and landing within a 30-mile radius of U.S. Bank Stadium.

"This is a typical thing we do to keep everybody safe," Mara says.

A "No Drone Zone" will also be in effect from 3:30 p.m. until midnight on Sunday. Those who violate the temporary restriction could face legal action.

The Minneapolis air traffic control tower will have nearly a hundred controllers working this week.

They typically have about a 18 controllers working in the radar room during a given shift.

However, this week, they're staffing between 25 and 30 controllers for every shift.

"We plan to have at least an uptick of 50 percent for staffing on Sunday night into Monday morning," traffic control officer Sean Fortier says.

Managers reached out to other Super Bowl host cities, like Houston and Indianapolis, to get a sense of what they should expect during the big game.

"Indianapolis is a similar sized city and also a cold weather climate. We were able to use their information to predict the impact to this region," Fortier says.

Controllers say people who live on normal flight paths may hear more planes over the next few days.

You may also hear them later in the evening than usual.

The FAA's biggest concern going into the big game was winter weather, but with the latest forecast showing only trace amounts of snow, they're not worried about it impacting their plan.