CEO Corie Barry says she will make investing in Best Buy’s 123,000 employees one of her top priorities. 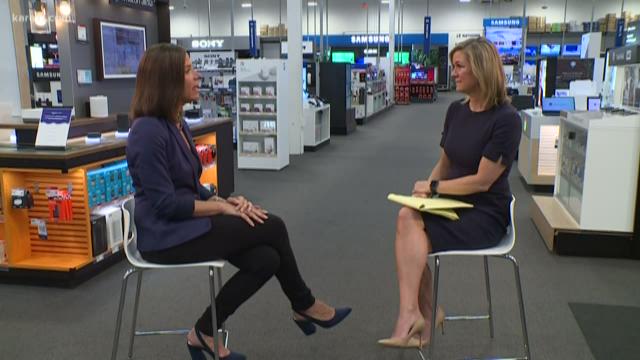 Best Buy made history today when Corie Barry took over as CEO. Barry is the first female to lead the Minnesota-based company and the youngest female CEO in the Fortune 100. She is also a proud Minnesota native, whose unique upbringing in Cambridge is one more thing that sets her apart.

“My parents were both self-employed artists,” Barry said. “We would load up the van, get in, drive across the country and set everything up sell art all day take it all down and do it the next day. I treasured growing up that way but I didn't think I wanted to live that way necessarily in my life.”

Barry craved structure as a child, and knew she did not want that same kind of uncertainty for herself when she grew up, but she never imagined she would one day become the CEO of a Fortune 100 company. “Not in a million years did I imagine this happening,” she said. “I did not have one person in my life who set a corporate example. I didn't know anyone who lived in a corporate life.”

But today, at forty four years old, Barry takes the reins of Best Buy. Though much has been made of how unusual it is for not only a woman, but such a young woman as well, to lead a such a large corporation, Barry says that is not her focus.

“I carry a lot of responsibility in that role and I love that I also maybe can set an example as a woman or set an example as someone who is younger than average, but that is not the priority. The priority is to be the best possible CEO of this amazing company.”

As CEO Barry says she will make investing in Best Buy’s 123,000 employees one of her top priorities.

“I believe we are as strong as our people and an engaged workforce is the most powerful asset we have,” Barry said, “and everything we can do to invest in our people to ensure they feel they have career paths to ensure they feel they're doing something meaningful and genuinely helping a customer, that to me creates more momentum than any other strategic idea I could think of.”

“In five years,” Barry said, “what it might look like is there are sensors in your home that can track your behavior and predictively tell you when a major medical event is going to happen so someone can alert me and say Grandma hasn't gone to the bathroom or hasn't taken her medicine, you might want to check on her.”

Barry, who serves as caregiver for her own grandmother, is constantly working to balance the needs of her family with her career. When she served as Best Buy’s CFO she made a Mother’s Day video for Best Buy employees, that drew back the curtain on how she handles commitments to both the company and her home life with a husband and two young children. The video exposes a more personal and vulnerable side of her.

“I was trying to give some examples of how I muck through it in my life. I think, from the outside, an employee might look and say it's all figured out she has people driving her kids to work or she has tutors and nannies. We have none of that. They get on the bus with everyone else,” Barry said. “I wanted to be as genuine as we could about the challenges we face about how hard it is to make some of the trade-off decisions and just let every parent, whether it's a mom or dad, let them all know it's not always clean it's sometimes messy and that's ok.”

The willingness to be vulnerable and more transparent is one more thing that sets Barry apart.

“One of the guiding behaviors we have at Best Buy,” she said, “is ‘be human’ and I really want to live that. And so everything I can do to help the world see the good, the bad, the ugly that comes