When should you get the flu shot? Researchers at Kaiser Permanente Northern California say you might want to wait a few weeks into the season. 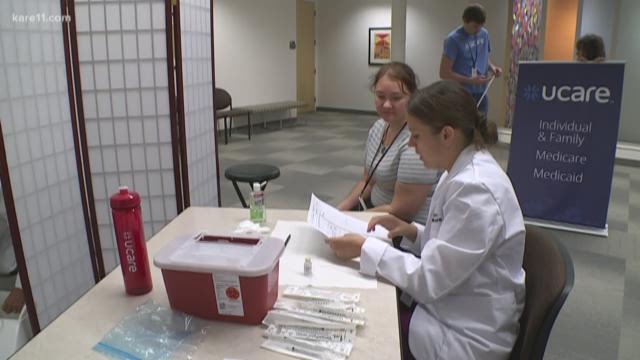 MINNEAPOLIS - The leaves haven't even started changing colors but it's time to start thinking about flu season again.

The vaccines for the 2018-2019 season are already out - and several clinics have started offering shots.

The employees at UCare were already in full flu-vaccine mode on Wednesday at their Minneapolis location.

Up until now, we've been told the earlier the better for the flu vaccine.

"We usually start it in September," UCare's associate medical director Dr. Amy Burt said. "October is our biggest month to get it."

However, a new study from the researchers at Kaiser Permanente Northern California showed that the risk of getting the flu climbs about 15 percent for every 28 days after getting the vaccine. In simpler terms - the vaccine isn't forever. Its effectiveness wanes over time.

This means if you decide to get the flu vaccine earlier in the season, you may be more vulnerable during the peak.

However, Burt says, it's a bit early to change up your vaccination routine all together.

"It's an important study and I think it's moving us to get a better understanding of what we can do to better immunize people so they have longer term immunity," Burt said. "Nobody, including the CDC, is recommending a delay yet."

So the choice remains up to you. However, Burt highly recommends still getting the vaccine at some point, if not for yourself, for others.

"For me even a bigger thing is that, if I were to catch the flu and were around somebody who was vulnerable, for example someone who is being treated for cancer, and they got the flu from me, and they died - I couldn't live with that," Burt said. "People who can protect people who are vulnerable need to do it."