New trade deal will affect farmers and miners in MN

President Trump announced a new trade deal that will affect farmers, miners, steelworkers and autoworkers in Minnesota, as well as potentially affecting the prices of goods. 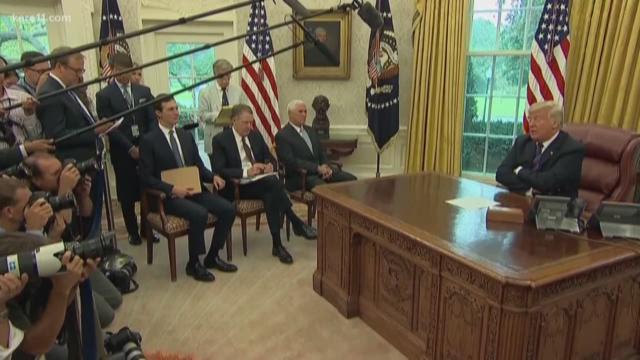 MINNEAPOLIS - Blasting the North American Free Trade Agreement between the United States, Canada and Mexico signed in 1994, President Donald Trump announced a new trade deal leaving out our neighbor to the north.

"We'll get rid of the name NAFTA. It has a bad connotation, because the United States was hurt very bad by NAFTA," Trump said. "I'll be terminating the existing deal and going into this deal.

President Trump aims to move more car production back to the U.S.

Under the new agreement, to avoid tariffs, car companies will have to make 75 percent of their parts in the U.S. or Mexico instead of overseas. That's up from 62.5 percent in the old deal.

They'll have to use more local steel and aluminum.

"It will probably raise auto prices. In fact, it almost certainly will," said U of M trade expert Robert Kudrle.

Kudrle believes the cost of goods will rise. But the stock market reacted very positively to the news of the deal.

"So at least in the very short term, people see this as a very optimistic sign," Kudrle said.

The new deal will affect farmers, although the president hasn't released specific details on the agriculture changes.

"Our farmers are going to be so happy. The farmers have stuck with me. I said we were going to do this. Mexico has said they are going to start purchasing as much farm product as they can. They're going to work on that very hard," Trump said.

Mexico is a top-three importer for many of Minnesota's crops. Minnesota Farm Bureau president Kevin Paap says they are excited and will review the details. Paap adds the U.S. needs to continue to work to bring Canada into the deal.

Mexico's president stressed that he, too, wants Canada included in the deal.

President Trump says they will begin negotiating, and he threatened to add tariffs to cars Canada imports if they don't agree to a deal.

Congress will have to approve the deal.