Noor's trial will be closely watched in U.S. and Australia 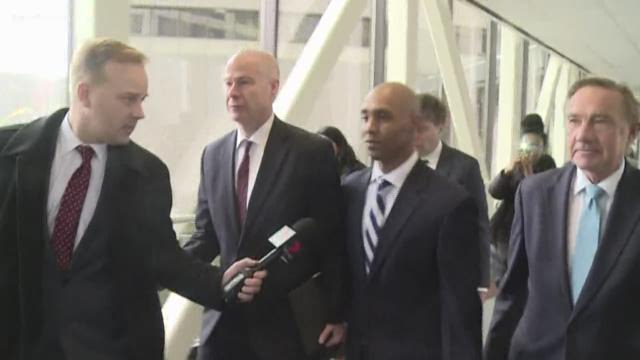 MINNEAPOLIS - When the trial for former Minneapolis Police Officer Mohamed Noor beings Monday, the legal developments will be closely watched a hemisphere away, where many Australians still harbor anger and sadness over the 2017 shooting of Justine Damond.

Noor shot and killed Damond, an Australian-American, in southwest Minneapolis after she called 911 to report a possible sexual assault, according to police.

"There's just been very deep sorrow at Justine's death," Michael Usher, a presenter for Seven News in Australia, told KARE 11 in a FaceTime interview. "Why a policeman would pull a gun so quickly — we don't quite understand that. Certainly, that happens in Australia, but not in those sort of circumstances."

Three Australian news networks, including Seven News, asked to record the trial at the Hennepin County Government Center, along with Court TV, the Associated Press and The New York Times. However, the judge denied all 17 requests for video and audio recording — including KARE 11's — after the prosecution and defense objected.

In a document filed this week, the judge wrote "based on the level of interest in this case, the undersigned Chief Judge finds there are special circumstances to order the restrictive provisions." No visual or audio recording will be permitted, and the media will have eight reserved seats — half for local outlets and half for national or international outlets.

"The whole world will be watching," said Michael Bryant, a managing partner at Bradshaw & Bryant and a legal expert unaffiliated with the Noor case.

However, Bryant also expects this case to serve as a barometer here in the United States, where police officers rarely face charges for shootings.

The first step in the trial is jury selection, which could last at least a week. The heavy media coverage will be a challenge in that selection process, since many in the pool have probably seen or read some type of news coverage of the Noor case.

One thing the jury hasn't seen or heard: A statement from Noor himself.

He has refused to submit to interviews and has not said anything publicly about the shooting. His silence cannot be used against him in the trial, according to a ruling from the judge this month, nor can a pre-hiring psychological examination.

Still, the Australian public has been frustrated by the lack of answers — and many hope the trial will provide some.

They will be waiting to see if Noor testifies. It is his constitutional right not to, if he so chooses.

"I think it's probably fair to say there's some building anger about the fact he hasn't given any interviews," Usher said, "that his silence has spoken volumes."