Darby's Pub & Grill is just blocks from the team's home at Target Field, and a growing collection of Twins memorabilia is the bar's tribute to the local ball club. 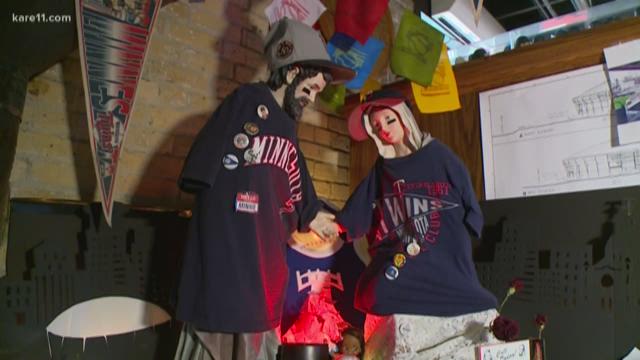 The creators of a good luck shrine in North Loop may want to take credit for the Minnesota Twins' recent success.

Nestled in North Loop, Darby's Pub & Grill is just blocks from the team's home at Target Field, and a growing collection of Twins memorabilia is the bar's tribute to the local ballclub.

"The Twins taking off and just going absolutely crazy happened about the time that we put the shrine up," said Darby's owner Marcus Dorn.

The official name of the shrine is 'The Temple of the Soaring Baseball] after the fourth line of the Twins fight song: "Watch that Baseball Soar." It got the green light from Dorn in April.

"We all like to think it's not the players on the field, it's the shrine that's bringing them the good luck," Dorn said, tongue planted firmly-in-cheek.

Twins fans Michael Haas and Joel Gillespie are two of the three shrine designers. They called around to several bars, but only owner Marcus gave them the green light.

The guys got the idea from a Montreal Canadien's shrine. They compiled theirs over the course of three weeks. "We kind of hit on the idea (that) Twins fans need something to channel their support and their energy and their action into helping the Twins win," Haas said.

Michael and Joel say fans have added to the shrine with their own good luck charms: newspapers from the 1991 World Series, pennants, baseballs and a mystery liquid said to be from the locker room.

"This has definitely made me more superstitious and especially if the Twins win a World Series, this thing is not going anywhere for a long time," Dorn reasoned.

The owner of Darby's says the shrine will be up for the entire season, whether the Twins continue on their hot streak or not.