More than 100 people were arrested and 21 officers were injured after protesters brought I-94 to a screeching halt for more than five hours Saturday night. 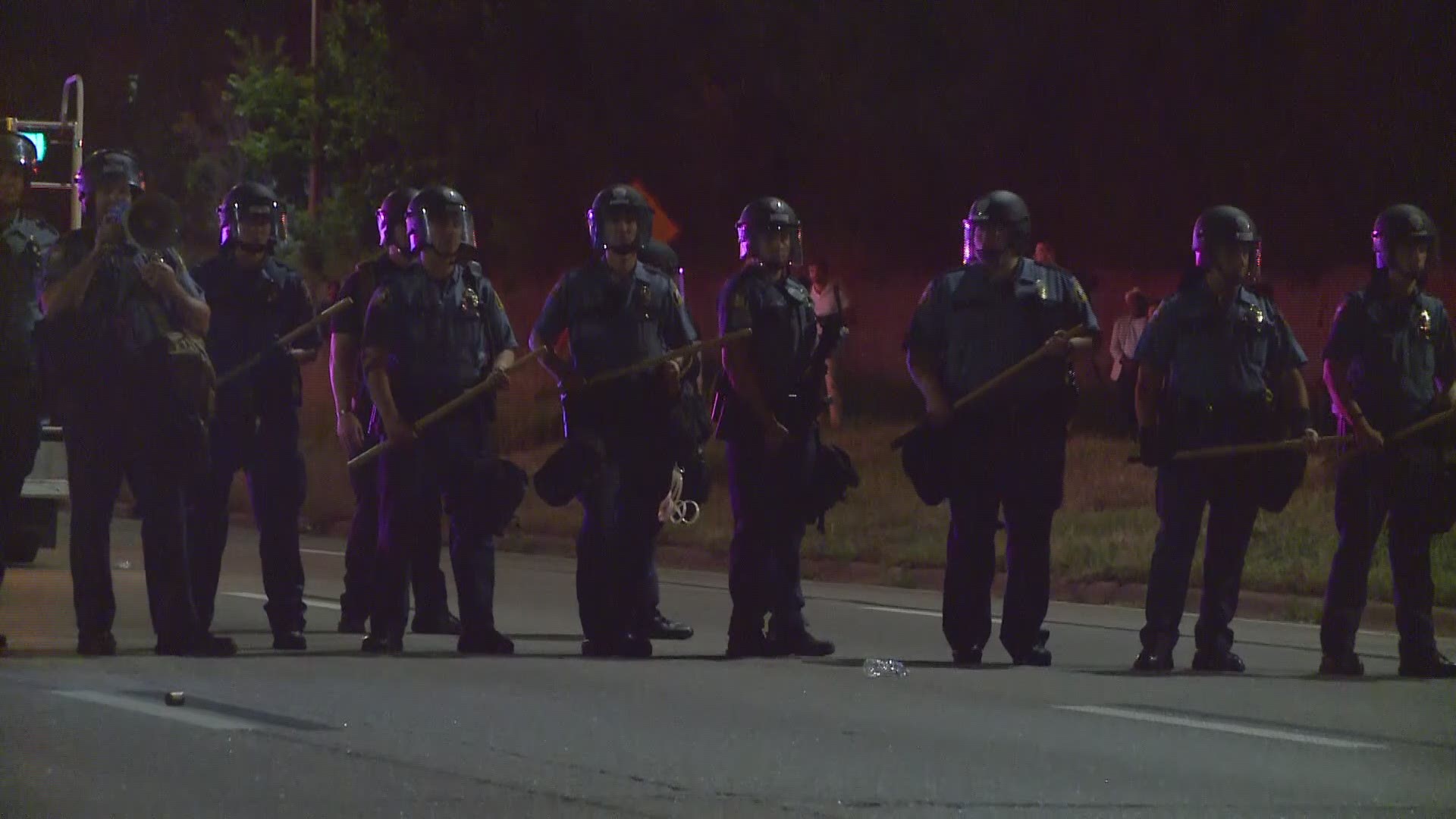 ST. PAUL, Minn. - More than 100 people were arrested and 21 officers were injured after protesters brought I-94 to a screeching halt for more than five hours Saturday night.

Authorities say during the course of the protests on 94 and later, on Grand and Dale, 21 officers from multiple agencies suffered injuries. The injuries were primarily caused by fireworks, rocks, bricks, glass bottles and chunks of concrete that were directed at officers, some hitting them in the head. St. Paul Police said someone threw a Molotov cocktail at officers, as well.

On Sunday evening, St. Paul Police learned one of the officers injured last night had a large concrete block dropped on his head. That officer is now suffering from a spinal fracture.

In total, more than 100 people were arrested -- 52 were taken into custody for public nuisance and unlawful assembly during an incident around 4 a.m. at Grand and Dale in St. Paul and 50 were arrested for third-degree riot overnight on I-94. At least eight of the 50 people arrested by the State Patrol were from outside of Minnesota.

Police in riot gear warned the crowd several times that arrests would be made if they didn't clear the scene, and after tactics like inert smoke, tear gas and marking rounds failed to disperse the crowd, arrests began.

Those arrested were loaded onto buses and removed from the scene.

Interstate 94 was finally reopened around 1:49 a.m., after authorities removed debris from the highway.

“On behalf of myself and our entire family, we urge all people to remain peaceful in all demonstrations throughout our community and our nation. When demonstrations become violent, it disrespects my son and his memory. Philando was a man of peace and dignity. Please, I ask you to at all times remain peaceful in your expressions of concern regarding his death at the hands of the police. I promise that we will not rest until justice prevails,” said Valerie Castile, mother of Philando Castile, in a statement Sunday.

The crowd moved from the freeway back to the governor's mansion where more disruption occurred. A few tried to get back on I-94 but were stopped by police. Several protesters then laid down in the street near Grand and Dale around 2:39 a.m., refusing police commands to clear the area.

Arrests began around 3:01 a.m., with authorities taking protesters one by one.

The shutdown started much earlier in the evening, when the crowd began marching from the Governor's residence in St. Paul around 7 p.m., where protesters have been gathered for the past three days. The Minnesota State Patrol tried, unsuccessfully, to stop them from entering the freeway around 7:30 p.m.

Initially protesters blocked eastbound traffic near Lexington Parkway, but they then crossed the median barrier to block vehicles in both directions. Officers gave more than a dozen orders for the crowd to disperse before they moved in to make arrests just before 10 p.m. 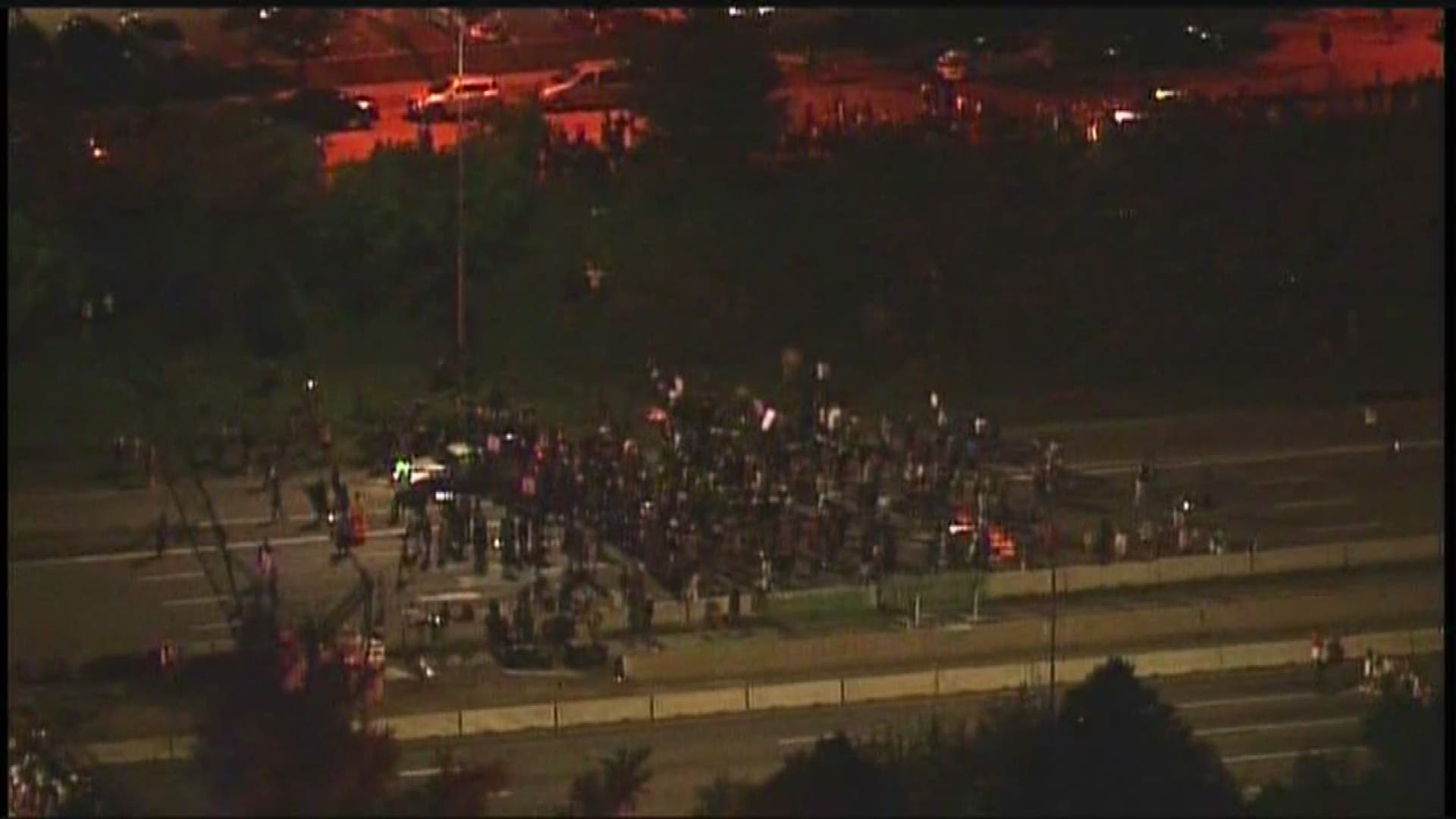 St. Paul officers and MN State Patrol moved protesters off the highway and on to the grass embankments. Some protesters moved to a pedestrian bridge and were later cleared around midnight.

As the sun sets protestors chant "Hey, Hey those killer cops have got to go." #PhilandoCastile pic.twitter.com/3o03LCneYx

Demonstrations took place in both Minneapolis and St. Paul on Saturday, as protesters called for change after Philando Castile was fatally shot by a St. Anthony police officer.

PHOTOS: Protesters shut down I-94

More than 100 people rallied at Loring Park in Minneapolis before marching down Hennepin Avenue, sometimes stopping in the middle of intersections.

The group eventually made their way to an area outside of the Basilica Block Party where a few protesters broke through the police barrier and were escorted away. The Minneapolis protest dispersed quietly.