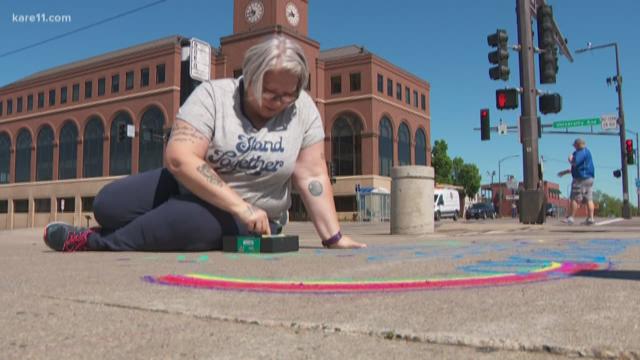 ST PAUL, Minn. — On beautiful days like Thursday you might just run into Susan Montgomery at a light rail station in St. Paul, doing her thing.

"Art is very healing and especially considering the fact that I've been through trauma before, I've learned through different therapy and stuff that it's helpful," Montgomery said with a green chalk in hand. She was in the middle of drawing a tree on the sidewalk leading up to the light rail platform on Rice Street.

Her pieces are simple and joyful.

"By no means am I Picasso," she said with a laugh. But one thing is true. Her art makes some people stop and admire the bright pop of color on the sidewalk.

On days when sidewalk chalk just doesn't cut it, Montgomery sets out to put notes up all over St. Paul. She said she has a friend in Minneapolis who helps her do the same on Minneapolis bridges.

On Tuesday, the Stone Arch Bridge was adorned with bright neon notes that had been laminated and tied to the railings. Each bearing a message that's positive. On the other side of the cards, Montgomery made sure to include a national suicide prevention hotline number.

"We just get supplies from the art store and we both take turns doing it with our families," Montgomery said. "We want people to be able to take the resources with them so we don't mind if they are ripped down or anything."

Montgomery said she's simply putting up what she would have liked to see when she was struggling herself.

Montgomery said in the very least, she hopes her work can bring people together for a brief moment.

"We're all strangers but we kind of know each other," she said. "You just never know what somebody is going through and that's the whole point of it right?"

You can find information about Operation Never Give Up here. Montgomery said the semicolon is a part of the title because she was inspired by Project Semicolon, a suicide and self-harm awareness initiative that was founded in 2013 in Green Bay, Wisconsin. The founder of the project described it like this: "A semicolon is used when an author could’ve chosen to end their sentence, but chose not to. The author is you and the sentence is your life."