The city of Minneapolis and the Park Board are looking to redevelop riverfront property in North Minneapolis— and it could include the largest outdoor amphitheater the city has ever seen. 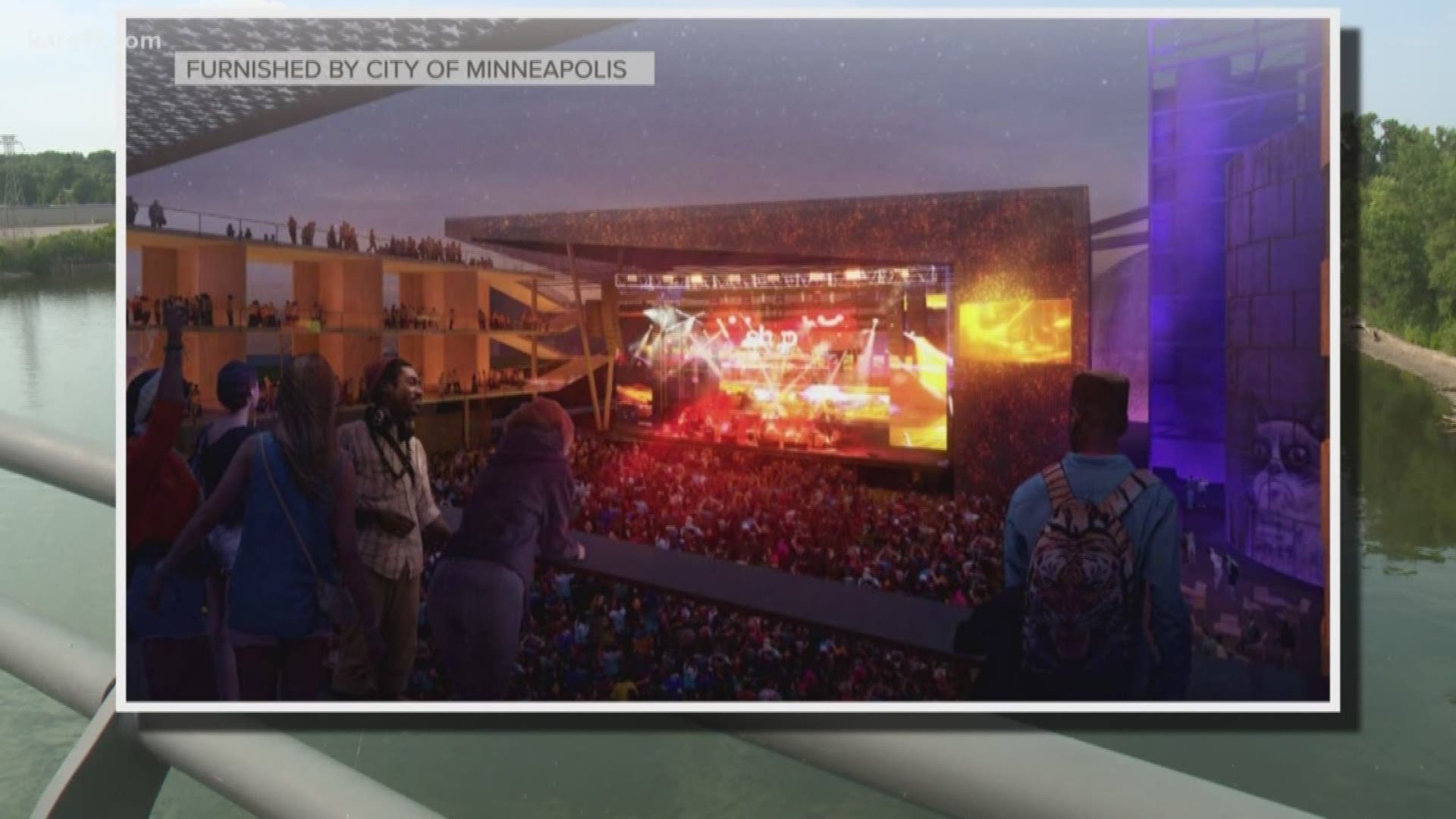 MINNEAPOLIS - A few miles north of downtown, directly within view of the Minneapolis skyline on the Mississippi River, there's a 48-acre industrial site that few people ever visit or even know about. It's owned by the city, which rents out the space to industrial businesses and a specialty mushroom farm.

But the city now has new plans for this property— including a proposal for the largest outdoor music and performance center Minneapolis has ever seen.

The Upper Harbor Terminal redevelopment plan, which is in the early stages of public discussion, aims to mix this 10,000-seat amphitheater with a riverfront promenade, a parkway, housing, commercial space and possibly even a hotel.

The city of Minneapolis has released renderings of a proposed 10,000-seat outdoor music and performance center in North Minneapolis, a riverfront venue that would be operated by First Avenue. It's considered the catalyst in a 48-acre redevelopment plan. @kare11 pic.twitter.com/eyr1JNkZSv

In a joint partnership with the Park Board and two developers, THOR Companies and United Properties, the city is attempting to transform an underutilized portion of North Minneapolis into a destination zone, particularly now that the Upper St. Anthony Falls lock closed.

The Community Performing Arts Center (CPAC) is considered the key element in the redevelopment project, according to Park Board architect and co-project manager Kate Lamers.

The Upper Harbor Terminal could use a boost, she said, since it's currently tucked away in an aging industrial area near the river.

"Nobody really knows where it is. It's not like there's a reason to go there now. It's not open to the public," Lamers said. "So the developers really felt it needs a catalyst to start bringing people there. The CPAC could be part of that equation."

The CPAC would be operated by First Avenue Productions about 50 days out of the year, leaving another 65 days for community programming and the rest of the year open to the general public.

"We really don't have anything like that — anywhere — in Minneapolis, of this size," Lamers said.

Between the amphitheater, green space and housing (including affordable housing), the city is touting the redevelopment plan as a game-changer for North Minneapolis.

But it's important to point out the 48-acre site is not vacant.

In fact, a host of industrial businesses utilize a 110,000-square-foot warehouse on the property, along with a specialty mushroom farm named Mississippi Mushrooms.

The small business, founded by Ian Silver-Ramp, moved to this site on the Upper Harbor Terminal three years ago. It holds farmer's markets on the weekends and has carved out a nice customer base for itself.

Now, Mississippi Mushrooms may be at the mercy of its landlord: The city of Minneapolis.

"We don't know where we fit in. It's totally uncertain for us," Silver-Ramp said. "We really hope the developers consider us as an existing business with the redevelopment."

Silver-Ramp said he's not opposed to the idea of development, but he wants it to include green business initiatives.

"I think the amphitheater is a really exciting idea and is a way to revitalize some of the site," Silver-Ramp said. "I just think it's really important that they don't steamroll through this development process and get rid of some of the really valuable things about the Upper Harbor Terminal that already exist."

Lamers did not rule out the possibility of including Mississippi Mushrooms in the final plan.

"Certainly, a smaller business like Mississippi Mushrooms, there's an opportunity for them to have a home," Lamers said. "But ultimately, that will have to come through with the process."

That process is still in the early stages.

The city and park board have released a draft redevelopment concept, and they have been holding public events to take input on the plan. Both entities would need to approve a final coordinated plan before construction could even begin by 2020 or 2021.

Public investment from state and local government will total a little more than $30 million, including the $15 million in state bonding that's already been approved.