A group from Patrick Henry High School in Minneapolis held a walkout Friday. 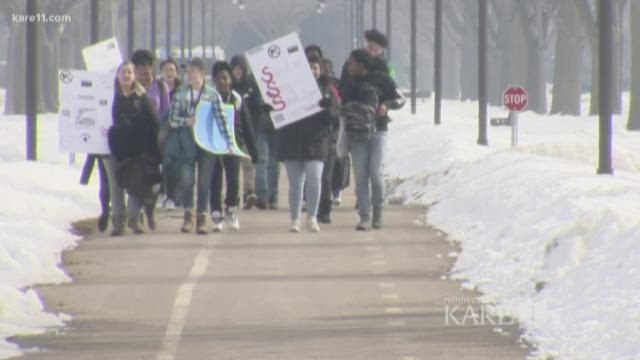 MINNEAPOLIS - The school shooting in Florida is still inspiring students in the Twin Cities to stand up for safer schools.

A group from Patrick Henry High School in Minneapolis held a walkout Friday. It's the chorus students have on replay around the nation.

“The way we have to get attention is by not doing what we are supposed to do,” Gunderman said. “I think that it is up to our legislators and up to us as young people to make a change. I am trying to get people's attention.”

The same group of students who walked out of class Friday said they feared the worst on Tuesday when Minneapolis Police say a man armed with a gun entered the school.

Delisha Taylor-Heard, a freshman participating in the march from the school to Victory Memorial said students are concerned about their safety.

“(Tuesday) was really a scary moment,” she said. “People's kids go to these schools. They want them to feel safe and come here and learn.”

Deniero Leach, a junior at the school, said he doesn’t always feel safe in class.

“You should feel secure and safe in school. You should not feel like someone is going to come in and start shooting up your whole classroom with a gun,” he said.

Nobody was hurt at Patrick Henry on Tuesday and the lockdown was lifted. But students participating in the walk Friday know all stories don't have the same outcome.

“As we have seen in Florida and in shootings past, lots of kids die every year in school shootings,” Gunderman said.

According to the New York Times, Data from the Gun Violence Archive, a nonprofit that began tracking school shootings in 2014, shows people have been killed or injured in school shootings every year since 2014.

The students hope their small voices and tiny steps lead to big changes.