It's been said that hope is essential to the human experience. 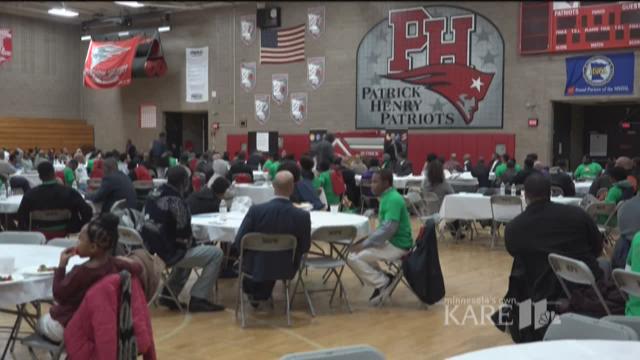 MINNEAPOLIS - It's been said that hope is essential to the human experience.

On Friday at Patrick Henry High School in Minneapolis, they were hoping to spread it.

The school's "100 Black Men Strong" day is in its third year.

It’s a day bringing young black students together with over a hundred black men from the community for conversation.

Everyone from doctors, to members of the military, to law enforcement.

“We want to let them know that there's a chance. They have the ability to do whatever it is they want to do in life and if you don't try it will never happen,” says Paul Bula of the U.S. Army.

“They inspire us. We have so many wonderful future leaders here in our community,” says Medaria Arradondo of the Minneapolis Police Department.

Those future leaders are listening and also impacted by what they're seeing in the news.

Today included sessions on things like interacting with police, crime within the black community and even relationships.

Most of all, it's a chance to talk and realize that common ground isn't as far away as it may seem.

“There has been things that I thought that nobody else went through, but when I look around there are so many more people that went through the same thing. It makes me feel normal. Like, it happened to me, it happened to you, we're similar,” says Patrick Henry High School Junior Xavier Goodman.

Similar and surrounded by hope.

James Cole, Jr. of the U.S. Department of Education was among the men in attendance on Friday to visit with students.