A suspect hits and kills a motorcyclist during a police chase in western Wisconsin on Saturday. 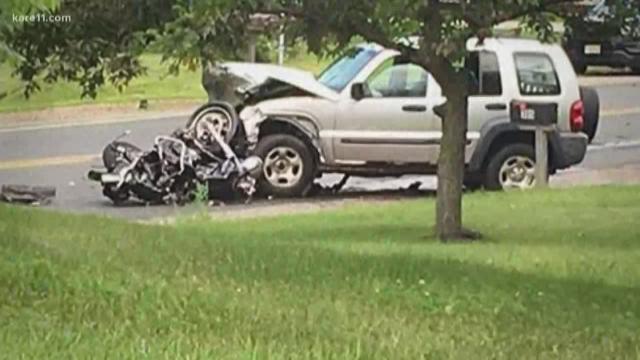 ST. CROIX, Wis. — A motorcyclist who died after being struck in western Wisconsin Saturday by a suspected car thief has been identified by police.

The victim has been identified as Dustin Edward Kalland, 39, from Stillwater by the St. Croix County Sheriff's Office.

St. Croix County Sheriff's deputies responded to reports of a 2013 Jeep Liberty being taken without permission and the violation of a no-contact order in Star Prairie Township just after 4 p.m. Saturday.

Deputies attempted to stop the vehicle just north of New Richmond, but a "vehicle pursuit occurred," according to a news release from the St. Croix County Sheriff's Office.

As the chase continued to the Village of Deer Park, the Jeep hit a motorcyclist, as a group of motorcyclists were turning left onto Main Street.

The driver "fled the scene on foot, where deputies were able to apprehend him after a short foot pursuit," according to the St. Croix County Sheriff's Office.

Kalland was on a Saturday motorcycle ride with friends, something Kalland has loved his whole life.

"Anything with wheels. From kids we went from bikes to three-wheelers, four-wheelers, go-carts, dirt bikes. If he could drive it, that's where it was," said his life-long friend, Michael Watson, who said Kalland was like a brother to him.

Watson said Kalland was a father of two.

And what happened after Kalland was hit especially bothers Watson.  Deputies say the driver of the SUV got out and ran until deputies could chase him down and arrest him.

"I mean you just took his life and you don't look to see if there's anything you can do? I mean, you don't even see if he's alive. You just take off," Watson said.

KARE 11 News is waiting to name the driver until he's charged in this case. But he has a long list of prior convictions for drugs, disorderly conduct, fighting with officers, and resisting arrest, among other crimes.