A look back at the Dayton years 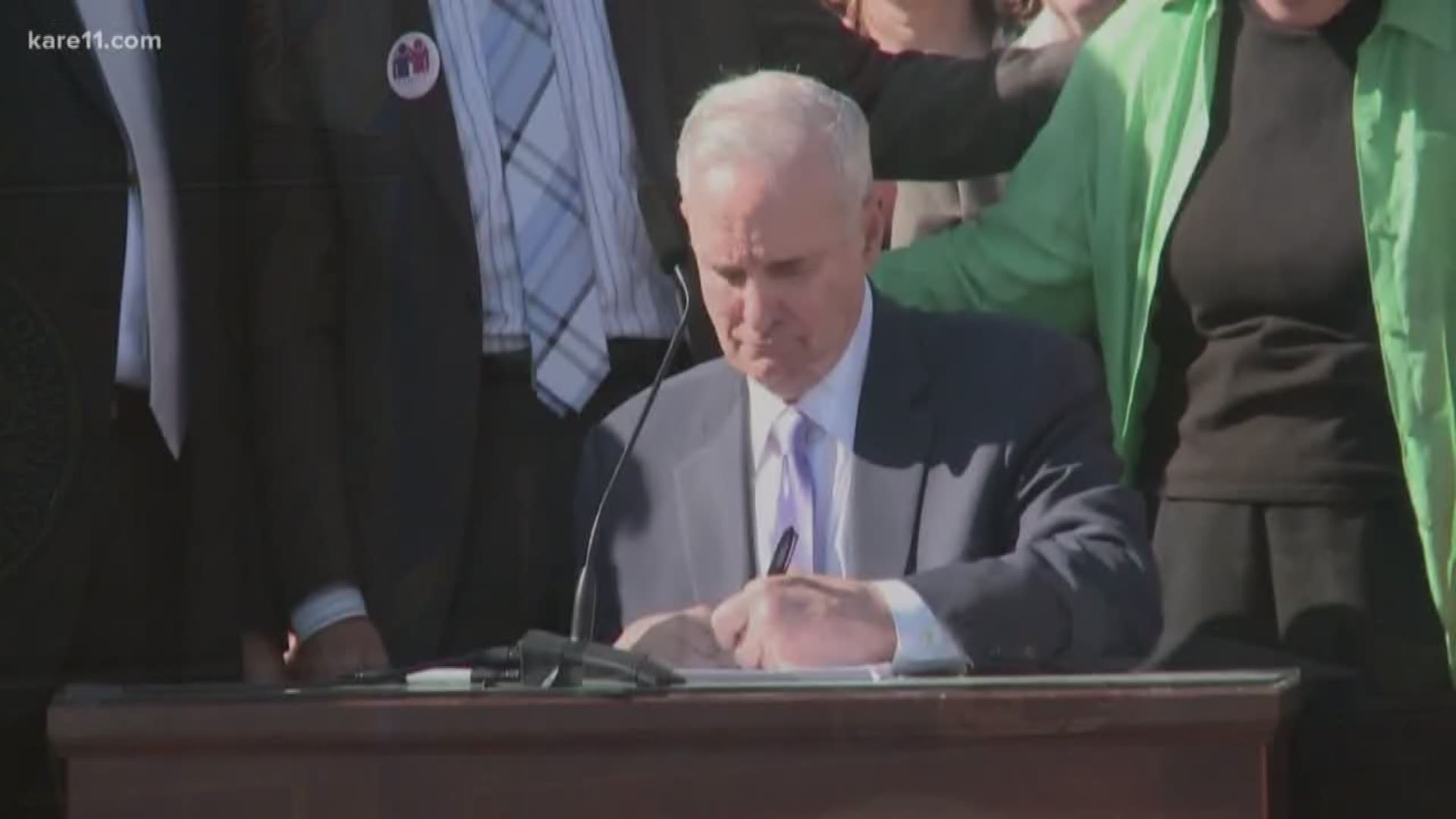 From his very first day in office in 2011 it was clear Gov. Mark Dayton wouldn't be bound by convention.

He allowed protesters into his first State Capitol press conference, where he signed legislation expanding access to Medicaid benefits in Minnesota. He even invited his detractors to the microphone to explain why they opposed subsidized health care.

Throughout his two terms as the state's chief executive Dayton would often make joint appearances with opposition leaders, to update the Capitol media on progress of budget talks. It was a break from the tradition of governors briefing reporters separately until after a deal was struck.

The Dayton's Department Store heir, and first DFL governor in decades, was never a typical politician. He even gave himself a failing mark for his single term in the US Senate.

But as he looks back on eight years he believes he's leaving the state in better shape than he found it.

"The credit belongs to the people of Minnesota, to the workers and the businesses and employers," Dayton told reporters at his final news conference.

He said he's proudest of his focus on education, passing budgets that boosted per pupil state aid and dramatically expanded pre-K programs such as all-day kindergarten.

He seemed happiest while visiting schools, chatting with children and showing them snapshots of his dogs on his smart phone.

Dayton took office amid a projected $6 billion deficit for FY 2012-2013. Budget reserves had been drawn down, and the State owed the state's school districts $2 billion in delayed aid payments.

As he leaves office the budget forecasters project a $1.5 billion surplus for the coming biennium. That's partly due to the turnaround in the economy, and also due to an income tax hike on the state's highest earners, something Dayton had promised while campaigning for the office in 2010.

In 2012 Dayton forged a football stadium deal with Republicans, the City of Minneapolis and the Vikings. He also joined unlikely ally Michele Bachmann in support of the new bridge over the St. Croix River.

For six of his eight years in office, state government was divided. Republicans controlled one or both chambers of the legislature. They battled Dayton over efforts to expand health care and the size of government.

Both sides often gambled with deadlines, leading to contentious stalemates, special sessions and even a lawsuit over executive power that went all the way to the Minnesota Supreme Court.

In that period he also signed the bill setting up Minnesota's own health insurance exchange, known as MNsure. It was controversial from the start with Republicans because it enabled Minnesotans to buy private insurance plans using instant subsidies available through the Affordable Care Act, aka Obamacare.

But the system's launch was plagued by delays, hangups and other malfunctions that prompted outrage, cost overruns and a management shakeup. Republicans deftly used MNsure's rocky start as a wedge issue, and attempted to blame the exchange for sharply rising premiums in the individual insurance market.

The system's launch in July of 2017 drew sharp complaints from the deputy registrars who run private license bureaus across the state. Car dealerships had trouble processing titles, and individuals vehicle owners were stymied in efforts to transfer titles.

The Legislative Auditor and Republican legislator took aim at MNIT, the state's in-house information technology division which had designed MNLARS on behalf of the Dept. of Public Safety.

The Dayton administration was also rocked by controversy over the Vikings stadium board and staff members using a suite at US Bank Stadium during the early part of the 2016 season. The suite was reserved for marketing use by the board, known as the Minnesota Sports Facilities Authority.

But the optics of Dayton appointees using the suites with family members and other guests created an uproar with Republicans, leading to reform bills. Dayton's MSFA chair and the stadium executive director both resigned amid the conflict.

In 2017 Dayton was sued by the House and Senate when he used the line-item veto to delete their operating budgets from appropriations bills. Both the district court judge and Minnesota Supreme Court urged the parties to settle their dispute outside of the legal system, but eventually ruled the governor vetoes had fallen within his constitutional authority.

Governor Dayton has been plagued by health problems throughout his tenure, with multiple surgeries on his back and hips. It was punctuated by fainting episodes, including one while delivering his 2017 State of the State speech.

The 71-year-old governor returned the next day to tell Capitol reporters it was just dehydration, and quipped, "If I had known it would result in Republicans not criticizing my speech I would have tried it years ago!"

But moments later at the same briefing Dayton announced he'd been diagnosed with prostate cancer and he'd be heading to the Mayo Clinic for treatment. Those treatments were successful and the governor returned to the fray at the Capitol during an intense budget battle.

In 2018, the governor returned to the Mayo for more spinal treatment. His stay there was much longer than anticipated, and Dayton later revealed that he had suffered permanent damage to his lungs as a complication of the surgery.

That episode greatly limited his mobility and kept him out of the public eye for the final two months in office.  He used a cane to walk, and held his final press conference seated at a table in the Governor's Reception Room.

"It's not the way I wanted to go out as governor. It's the biggest disappointment of these last two months," Dayton lamented.

But he wasn't too weak to trade jokes with reporters. When asked about plans for his retirement he talked about becoming more active on Twitter.

"I may have to start Tweeting and see if my followers get into the double digits!"