President Biden thanks Walz, other governors for vaccine work

The president gave a shoutout to a bipartisan group of governors, including Tim Walz of Minnesota, for their states' efforts to speed up COVID-19 vaccinations. 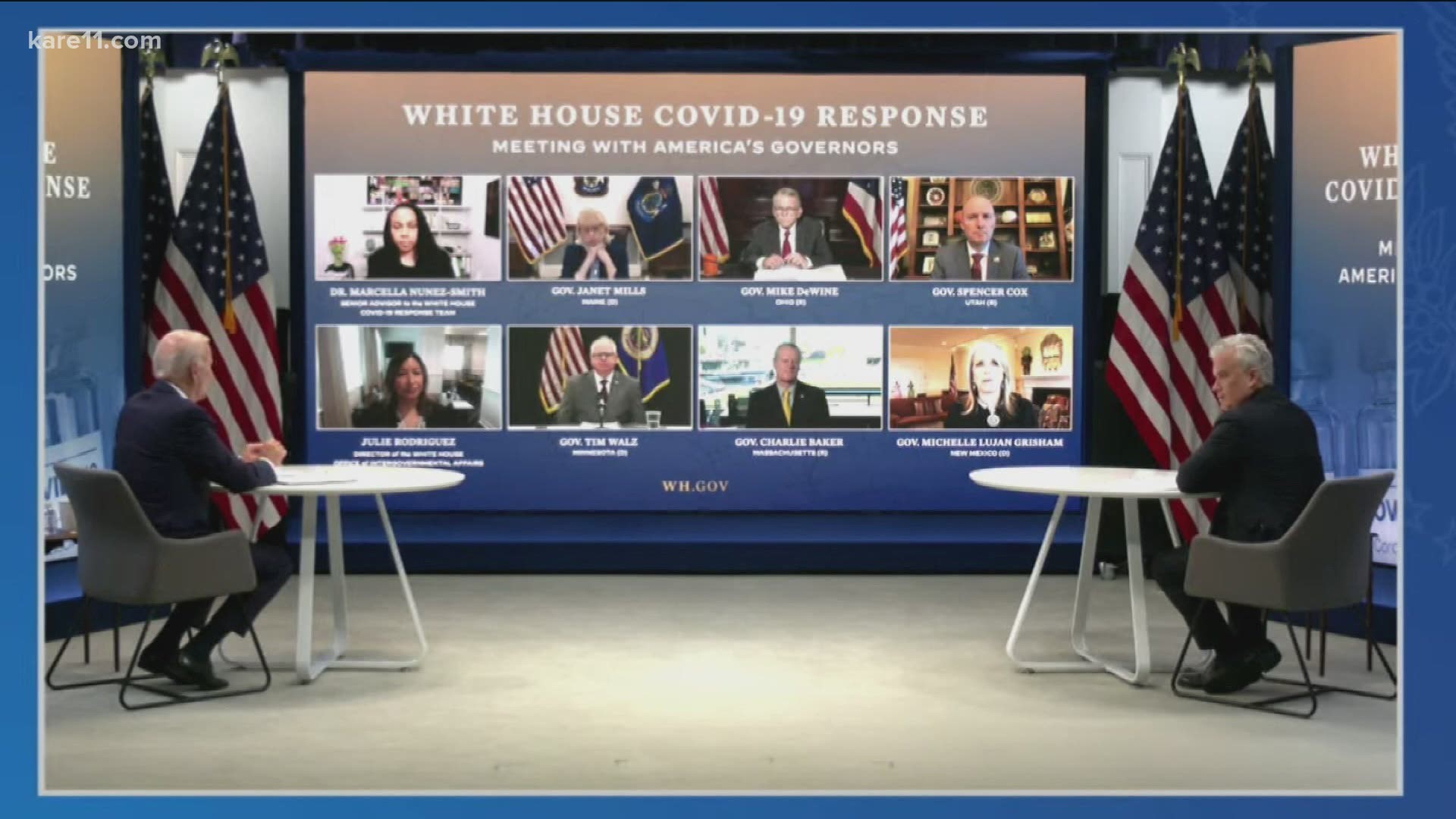 MINNEAPOLIS — President Joe Biden said Tuesday that making vaccines more convenient will be the key to reaching the goal of getting shots to 70% of the US population by July 4.

He thanked a bipartisan group of governors, including Minnesota's Gov. Tim Walz, for their states' efforts to accelerate vaccinations, which will eventually translate to a quicker return some semblance of normal post-COVID life.

"It’s all about governors and mayors and county executives. It’s all local. It’s on the street," President Biden remarked during a virtual roundtable event that was carried live on the White House YouTube channel.

"We have to make it easier and more convenient for all Americans to get vaccinated – you’re busting your neck doing that!"

The Republican governors of Ohio, Utah and Massachusetts joined Gov. Walz and his fellow Democratic governors from Maine and New Mexico at the event.

The overriding message is that governors across the nation have reached across party lines to share information about what has worked well in their states, in terms of COVID treatment, PPE and now the drive to inoculate their citizens.

The chief executives agreed that it's critical to give solid, fact-driven information to those who are hesitant about getting the vaccine, and to build public confidence in that line of protection.

"It’s not assuming they’re hesitant, they’re ideologically opposed. It’s trying to understand where they’re at, what are the differences," Walz told the president and other panelists.

"My message to folks is there’s a lot of good reasons to get vaccinated, but for some of them, you know, if you need another one, go get vaccinated so you’re alive to vote against me in the next election! I don’t care. I just want to get it done!"

That line elicited laughter from President Biden, who returned to the theme of convenience. He was enthusiastic about the news Walz shared about a mobile vaccination clinic for fans entering Tuesday night's St. Paul Saints home opener.

"It really gets down in many cases to just the convenience," Biden explained. "Like you’re walking through the gate. Go ahead, you know, give me a shot. I can do it."

For those seeking easy options, Biden touted the federal website Vaccines.gov and let people know they can text their zip codes to the number "438829" to find places near them with doses available right now.

The president also announced that Uber and Lyft will be offering free roundtrip rides to vaccination clinics beginning May 24 as part of the effort to get at least one dose into 70% of Americans before Independence Day.

Walz said the federal government's assistance has been extremely valuable in getting doses to Minnesota clinics and pharmacies. He said our vaccination rate -- at 64% of the adult population as of Tuesday -- wouldn't have been possible without the community organizations that partnered with the state.

He said the same groups that helped spread the word about voting during the pandemic and taking part in the Census have swung into action to help get the word out about vaccines. Minnesota led the nation in both voter turnout and in Census participation.

Walz pointed out that Native American communities in Minnesota set the pace for how to get vaccines to those who needed them the most.

"Here in Minnesota we have 11 sovereign tribal nations. They did this better than anybody else in the country. They focused on their elders, they focused on multi-generational households and they focused on delivering where people were at," Walz explained.

He told Biden and the other governors the rapidly accelerating pace of vaccinations is what helped the state tamp down a surge in the B.1.1.7 variant. As a result, the feared impact of the highly contagious variant was essentially blunted.

"Hospitals did not become overwhelmed. We did not have close back down doing many of the things we were doing. And the most important thing is far fewer people died from that."