Budget talks took a turn for the worse Monday afternoon, as the clocked ticked down on the final week of the 2019 session. 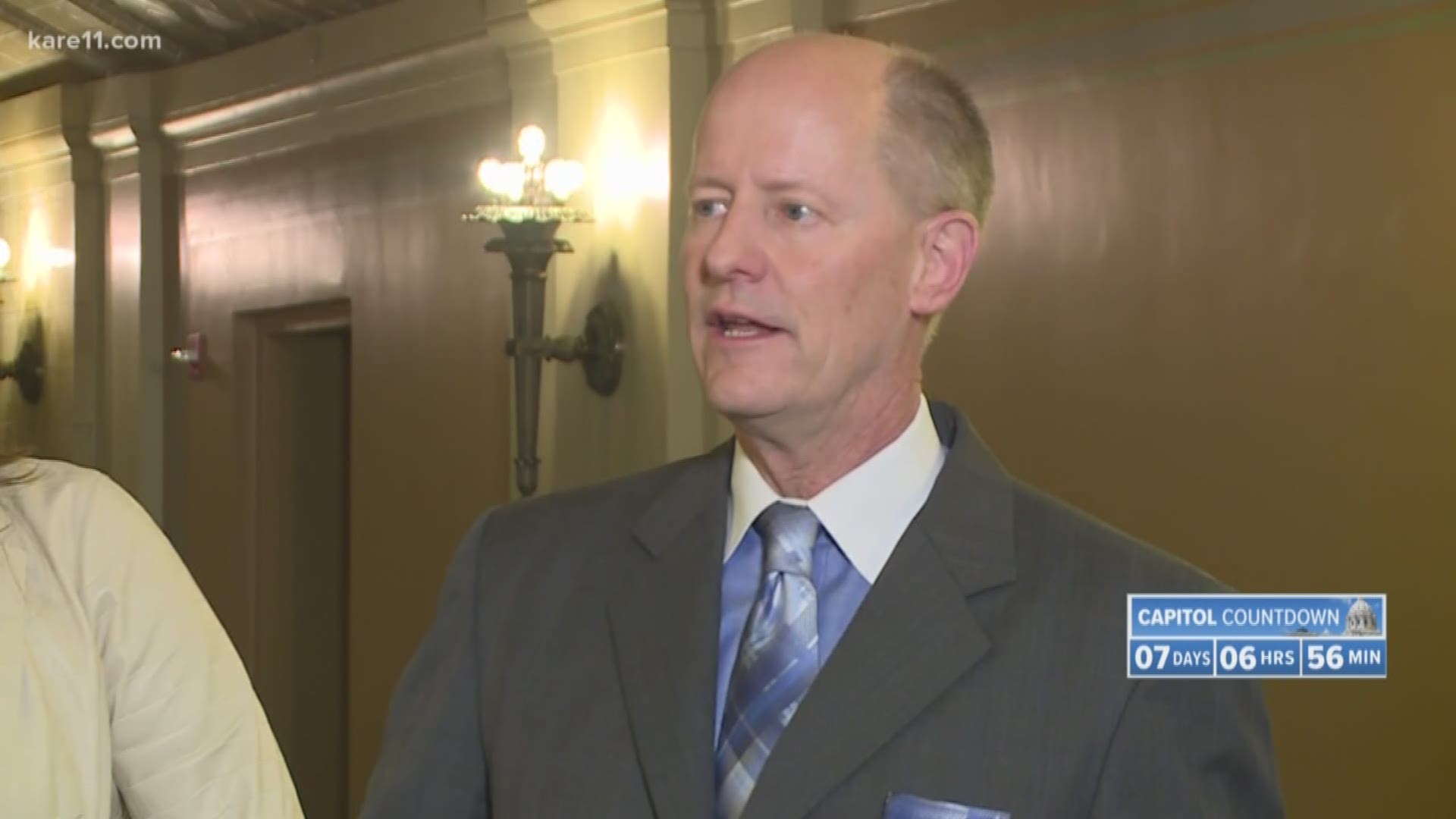 ST PAUL, Minn. — It was a roller coaster day of money talks at the State Capitol, where the clock is ticking down to the May 20 deadline for passing a two-year, balanced budget.

Legislative leaders and Gov. Tim Walz had hoped to craft an agreement on overall spending targets by Wednesday, but by the end of the day Monday that goal seemed quite elusive.

Senate Republican leaders and House DFL leaders spent the day in and out of negotiations with the Governor and his staff. The delegations would emerge between rounds to update the media on offers, counter offers and explanations of why they've drawn hard lines when it comes to some proposals.

Gov. Walz said he was surprised and disappointed by the Senate Republican Majority's third offer, which took the extension of the Medical Provider Tax off the table. The governor and his Human Services Commissioner Tony Lourey have said it's impossible to do a four-year budget without that tax.

"They do not have the capacity to fill the needs the community’s asking for, they’ve taken rigid pledges of no new taxes and to fix that they’re willing to put health care at risk," Gov. Walz told reporters, lashing out at the GOP proposal.

The tax has been on the books for 27 years but is set to expire at the end of this year as the result of a deal struck between Republicans and then-Gov. Mark Dayton in 2011 to end a government shutdown. It was originally created to raise money for the Health Care Access Fund, which was used to pay for the Minnesota Care health plan.

A group of 50 rural and urban hospital CEOs have spoken in support of extending the provider tax, because it helps them care for lower income patients and lower hospital costs in the long run.

Gov. Walz was also taken aback by the Senate proposal to dip into the state's budget reserves, the so-called rainy-day funds, to help pay the bills for the next two years.

Senate Majority Leader Paul Gazelka told reporters his delegation felt it was appropriate to tap the reserve funds because it shouldn't have been as large as it is in the first place. He said that fund grew by $491 purely by virtue of then-Gov. Mark Dayton vetoing a huge spending bill at the end of the 2018 session.

"So we’re simply saying we have resources, and in addition to that we have another $2.2 billion that our government grew, the forecast number, so we’re saying let’s live within resources that we have," Sen. Gazelka told reporters.

"That's five percent growth, and we've come up a little from that. And so we’re saying we don’t need taxes to do it. And the governor is, that’s why it’s such a difficult place that we’re at."

There's a tradition of budgeting for the next two years and aiming for fiscal stability in the following two years after that, known as the "out years." But Gazelka's pointed out the state constitution only requires a two-year budget document.

House Speaker Melissa Hortman noted that Gazelka stood in front of a poster which featured emojis as he addressed the media.

"When you’re thinking more about how your emojis look on poster board than the fiscal stability of the state of Minnesota for the next four years, I don’t think you’re serious about negotiations," Rep. Hortman remarked.

At one point in the day, Senate leaders offered to increase their spending target by $100 million over their original plan. They proposed sending $75 million of that additional money to schools, and the remaining $25 million to public safety.

The governor called it an acknowledgment that their original spending plan inadequately funded schools and public safety, but he was concerned about where they planned to get the extra $100 million.

To pay for it without raising taxes, the Senate proposed taking that money from the Health Care Access Fund. That fund will eventually be drained down to zero if the Medical Provider Tax ends on schedule. But there would still be some residual money in the meantime, dollars that would normally go to health coverage and other public services.

"This continues to pit elderly and disabled Minnesotans and their health care against the school children of the State of Minnesota," Rep. Hortman said.

"It does not honestly acknowledge the needs of this state. What we really need is to get to an honest conversation about having the resources to make the investments that Minnesotans need."

At one point in the day Gov. Walz offered to reduce his proposed gas tax from 20 cents a gallon down to 16 cents per gallon, phased in over four years.

Republicans rejected it out of hand saying they will not raise any new taxes, especially any that would be paid by everyone in the state directly or indirectly.

"We’ve always said the gas tax is not an option. What they do in their plan is lower it four cents, which still makes Minnesota the sixth highest state for gas tax," Gazelka said. "That a dead issue for us."

Two years ago, when lawmakers controlled both the House and Senate, they carved out half of the sales tax revenue on auto parts and diverted it from the General Fund to transportation.  Democrats want to undo that dedication, freeing up those sales tax dollars to be spent once again in schools and health care. 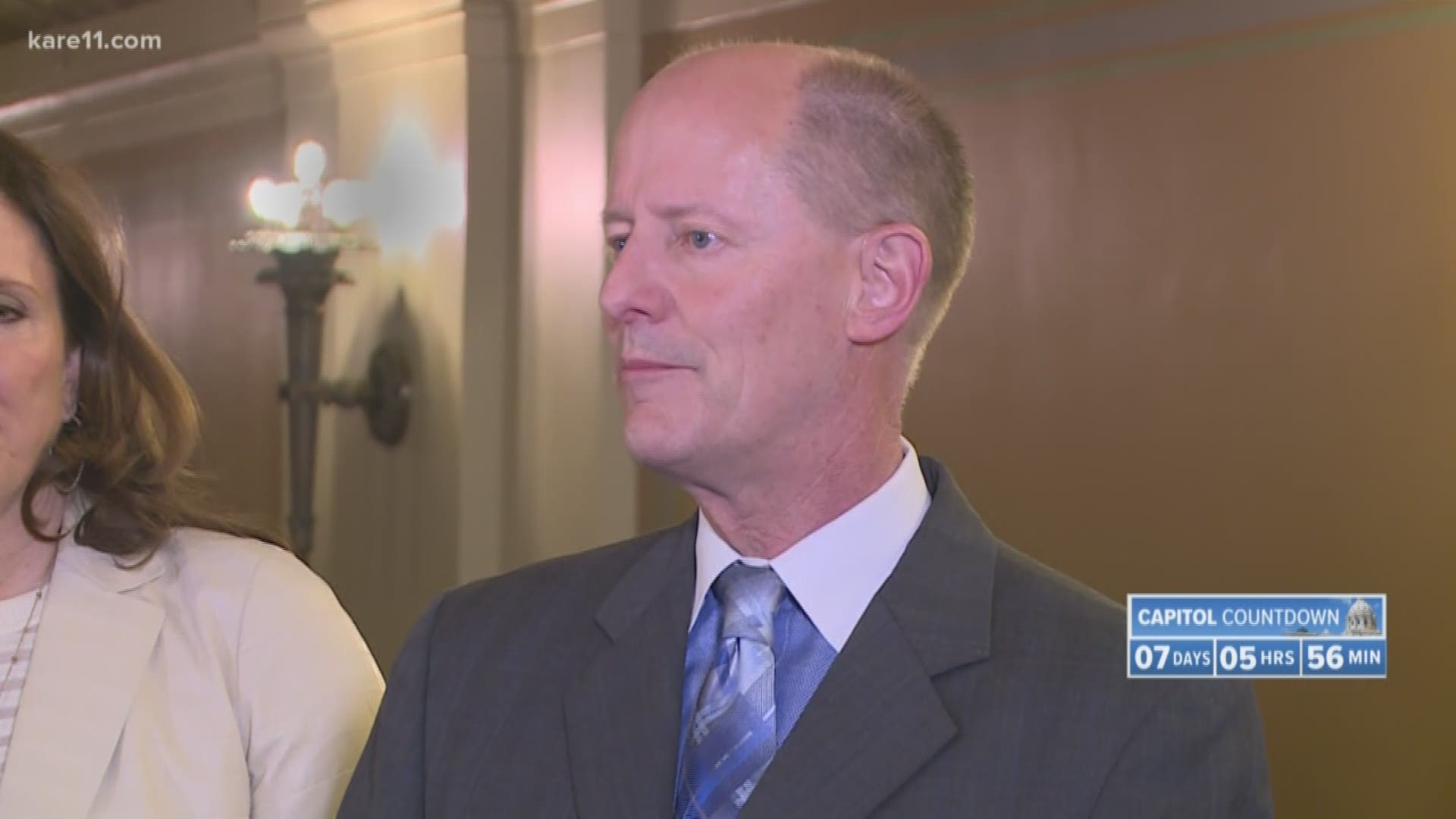 The budget is made up of ten omnibus finance bills, but the House and Senate passed vastly different versions of those bills. House-Senate conference committees have been working to merge those competing versions into a final bill that can pass both chambers without any amendments.

But those committees can't button up those bills until there's an overarching agreement between the governor, House Speaker and Senate Majority Leader on spending targets.  The House targets started at $49.8 billion, while the Senate's starting point was $47.6 billion.

Governor Walz's proposed budget was $49.3 billion.  Walz and the House agreed to drop down to $49.1 billion during the first round of negotiations.

The Senate's offer, to increase spending by $100 million would move that body's target up to $47.7 billion.  But again, the governor and House leaders disagreed with how that extra spending would be paid for, by tapping into the Health Access Fund.

Lawmakers aren't allowed to pass a budget with a projected deficit. They have to start the two-year cycle with a plan that spends less than the state expects to collect in revenue during that period.

That's why fiscal forecasts and economic outlooks are vital to the process.