State Patrol and other agencies ramp up security for expected pro-Trump protests heading toward Inauguration Day, with a nod to the possibility of militia violence 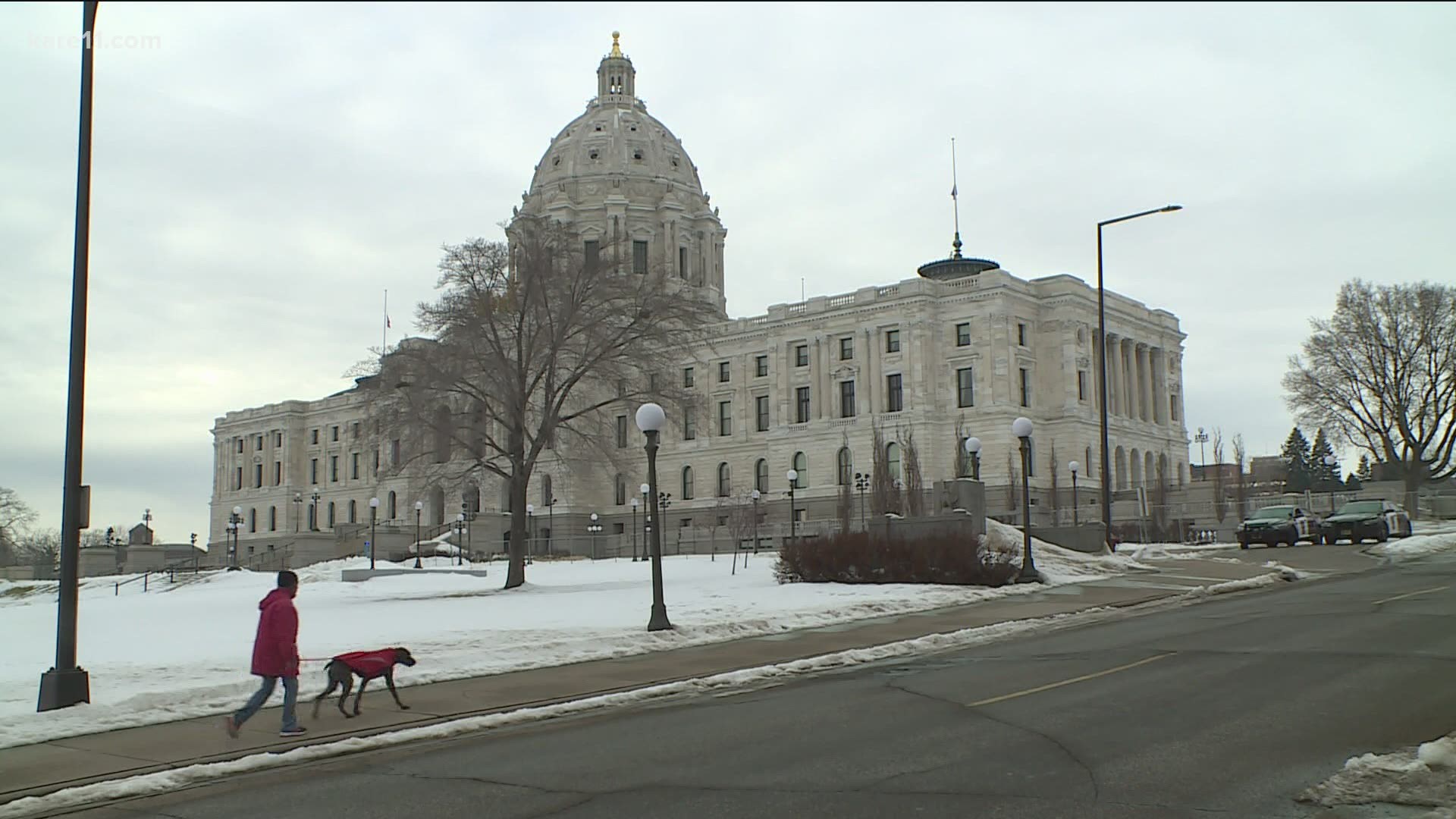 ST PAUL, Minn — Governor Walz and other leaders are pledging to respect the rights of Minnesotans to protest the inauguration of Joe Biden, but at the same time they're cranking up security around the State Capitol between now and Inauguration Day.

On Thursday the Minnesota Department of Public Safety (DPS) said while the Capitol remains a safe place, state officials are asking residents who aren't working or doing business there to stay home. Among the measures being taken to guard against potentially violent activity:

“We will continue to track and monitor reports of any individuals or groups that are not interested in a peaceful expression of their First Amendment rights so we can respond accordingly,” said DPS Commissioner John Harrington. “We have been working with our law enforcement partners to develop a coordinated and comprehensive plan to guard the Capitol and protect state employees, visitors and peaceful protestors from harm."

Gov. Tim Walz spoke with reporters Wednesday about security plans, and trying to stay ahead of those who would cause harm.

"We use the intelligence that we're gathering. We've had briefing after briefing,"  Walz said. "And there's a very cohesive multi-agency emergency operations center that will be standing up this week."

It's partly a reaction to the attack on the US Capitol Jan. 6, as well as some of the threatening language used by speakers at the Minnesota "Storm the Capitol" rally the same day.

On top of that, the FBI's Minneapolis office issued an alert in late December warning of potential violence at a planned Jan. 17 rally at the State Capitol. The memo reported that local members of the Boogaloo Bois movement were casing the Capitol Complex at a rally in December, looking for law enforcement capacity and vulnerabilities.

The FBI alert said at least one Boogaloo member discussed placing snipers in buildings and destroying buildings that could be used as a sniper roost for law enforcement. Boogaloo followers are proponents of a second civil war. Some self-described Boogaloo members were indicted for their roles in the Twin Cities rioting last year.

But St. Paul Police Chief Todd Axtell stressed in a Facebook post Wednesday that specific threats are yet to be verified.

"We've spoken to our federal partners and can say that we're not aware of any verified threats at this time," Chief Axtell wrote.

Gov. Walz Wednesday activated the Minnesota National Guard to support local law enforcement in the days leading up to the inauguration of the new president.

Lt. Col. Scott Hawks said soldiers from the 257th Military Police Company, based in Monticello, may be on duty by this weekend. The governor's order allows for flexibility in the numbers of Guard members deployed through the mission.

Public Safety Commissioner John Harrington briefed legislative leaders about security preparations, but said they should feel free to continue to meet at the Capitol for the time being.

"They do not have specific information that causes them to be concerned about our safety at the Minnesota State Capitol," DFL House Speaker Melissa Hortman told reporters Wednesday.

"At the same time, they are dedicating an intense amount of resources to investigating whether there are any credible threats."

In a previous memo to legislators, Harrington had said the Dept. of Public Safety is aware of generalized threats to judges, cabinet commissioners and DFL state lawmakers. Efforts are underway to bolter protection because pro-Trump groups have been holding demonstrations at lawmakers' homes.

Democrats are being targeted and pressured to end Gov. Walz's peacetime emergency powers and end his executive orders aimed at curbing the COVID-19 pandemic.

St. Paul Police Chief @ToddAxtell says Capital City is in good hands as SPPD and partners make security preparations for Inauguration Day protests. "We've spoken to our federal partners and can say that we're not aware of any verified threats at this time." pic.twitter.com/pbsyuDFmAW

The Minnesota State Capitol has already been sealed very tightly since the widespread civil unrest that followed the killing of George Floyd last May. Access to all of the buildings in the Capitol Complex is extremely limited, and state troopers are staffing checkpoints at the few entrances that remain accessible.

Harrington urged lawmakers to be careful with their language because some people can be incited to violence by it.

"As leaders in our state, I think it is up to all of us to call out language or activity that endorses or encourages illegal or destructive behavior. We simply cannot stand by—and certainly not participate--while some choose to instigate violence or ignore law and order in our state and nation."

Several Republican House members appeared at the "Storm the Capitol" rally in Minnesota Jan. 6. One told the crowd they're engaged in a culture war. Other lawmakers singled out the Ramsey County Judge who signed off on a lawsuit settlement that made it easier to vote by absentee ballot during the pandemic.

Democrats are being targeted and pressured to end Gov. Walz's peacetime emergency powers and end his executive orders aimed at curbing the COVID-19 pandemic.

RELATED: In 2021, presidential inauguration will be like no other

RELATED: After historic impeachment vote, here's what comes next