The first shipment of 300 shirts sold out quickly at Minneapolis Police Federation's offices, and buyers weren't all officers. 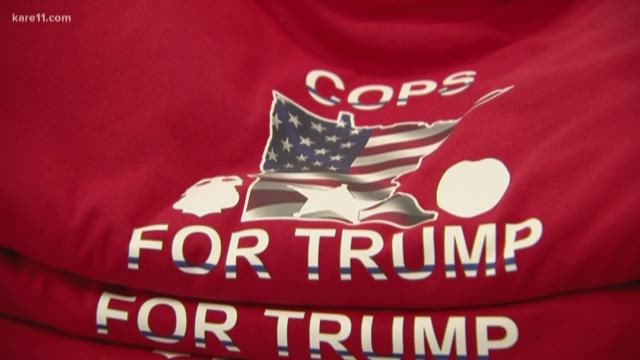 MINNEAPOLIS — The front counter at the Minneapolis Police Federation was jumping Monday, as people streamed in the door looking to lay down $20 for a red "Cops for Trump" tee-shirt.

The first shipment of 300 shirts sold out by 11:00 a.m., but the police union expected that supply to be replenished by afternoon. The profits from the shirts will go to police and fire charities.

"There are people waiting, they’re signing up on waiting lists. We knew that it would do well. We didn’t anticipate this large of a demand."

Kroll ordered the shirts in response to a decision by Mayor Jacob Frey and Chief Medaria Arradondo to enforce the rule that off-duty officers can't appear in political rallies in their city-issued uniforms. The mayor and chief made their position clear after President Trump's campaign announced an Oct. 10 rally at the Target Center.

The bright red "Cops for Trump" shirts will help off-duty officers be seen and recognized at the president's campaign event, which is expected to focus on crime in urban centers such as the Twin Cities.

Many of those who came to the federation's northeast Minneapolis offices were not law enforcement officers, but people who support the police and/or the president.

"The police are the glue holding this very-loosely held country together. God bless them!"

Kroll and others have accused Mayor Frey of being politically motivated because officers have appeared as backdrops in events held in the past by Presidents Barack Obama and Bill Clinton.  But it's important to note that those events weren't political campaign rallies.

President Clinton appeared at a 1994 police convention to hammer away at Congress for going against him on public safety funding.  And Obama's Minneapolis event in 2013 was a forum on gun violence held in response to mass shootings.

This is Trump's first rally in the Democratic stronghold of Minneapolis, after prior campaign rallies in Duluth and Rochester. He also held an official White House event at a trucking company in Burnsville last spring.