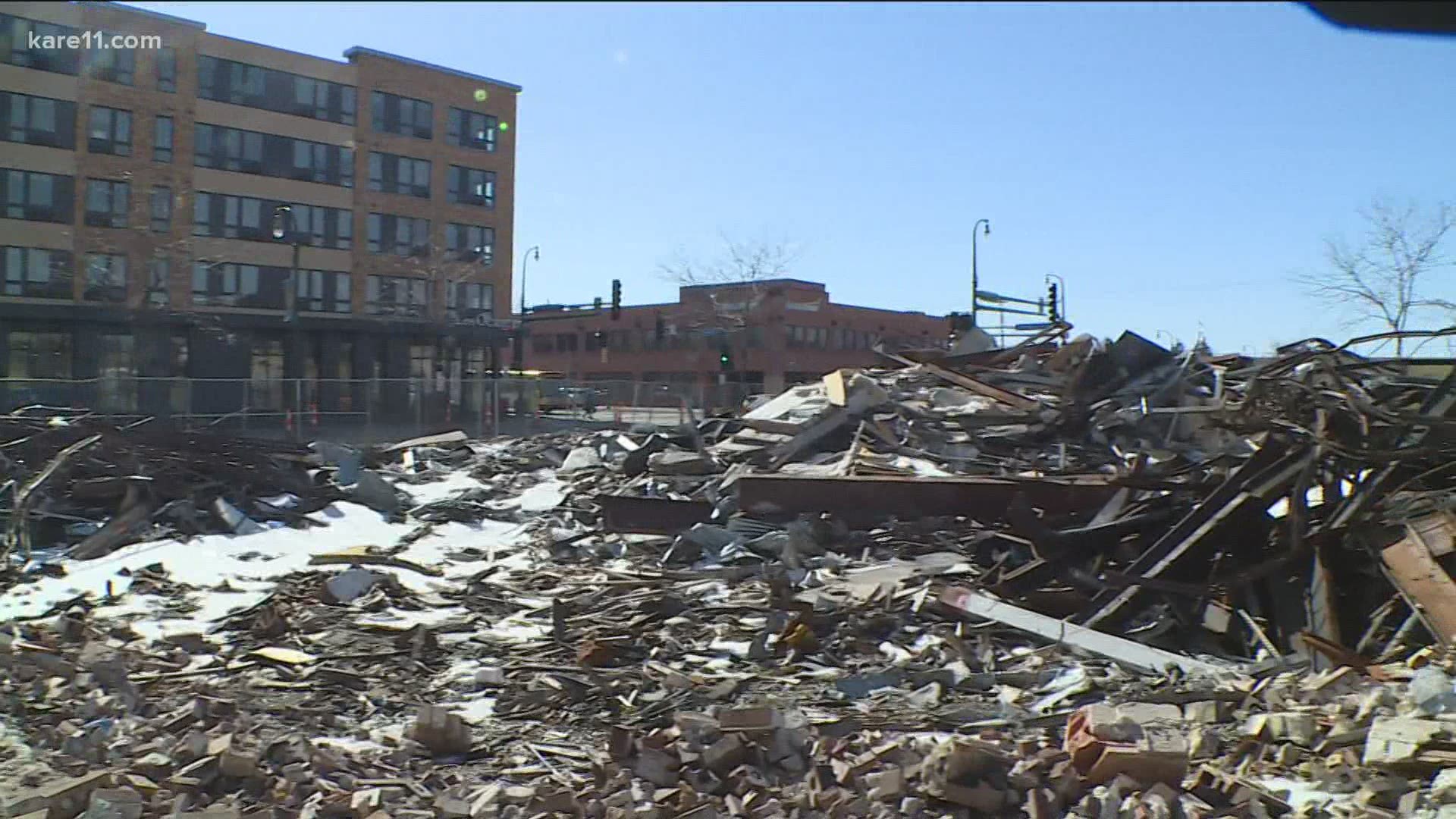 The DFL-controlled House passed an aid package known as the PROMISE Act last summer during a special session, but the bill never gained traction in the GOP-controlled Senate during a contentious election year.

House Democrats Thursday stood in front of a huge rubble pile near the intersection of Lake Street and Chicago Avenue in Minneapolis to renew their commitment to pass the Promise Act and challenge Senate Republicans to look at the business owners in those riot-ravaged corridors the same way they would victims of natural disasters in other parts of the state.

"Injustice, inequalities, discrimination and exclusion happens in many forms. And this is one of them," Rep. Mohamud Noor told reporters.

"We cannot be divided and picking and choosing who’s the winner and the loser."

Hundreds of small businesses were damaged or destroyed in the civil unrest that followed George Floyd's death in police custody Memorial Day. The worst destruction occurred in the commercial corridors of Lake Street and West Broadway Avenue in Minneapolis, and University Avenue in St. Paul.

Many of those shops were owned by immigrants and people who identify as BIPOC -- Black, Indigenous and Persons of Color.

"These communities were declining until immigrants and refugees came into these areas to revitalize them! They have kept these parts of Minneapolis alive and thriving," Rep. Kaohly Vang Her explained.

PROMISE is an acronym for Providing Resources, Opportunity and Maximizing Investments in Striving Entrepreneurs Act. It would provide $167 million in direct aid to small businesses, plus $125 million to compensate those who had to pay for uninsured losses out of pocket.

The $300 million would be one-time money that comes from the state's projected budget surplus. It calls for a special panel to review requests and a process for finding out which claims were paid by insurance companies already.

In the meantime, Rep. Fue Lee has a separate piece of legislation that would provide $300 million in small business grants financed through appropriation bonds, so the state's financial cost would be spread out over many years instead of dipping into the surplus.

"These insurance payouts are covering at the most, on average, only 40% of the property damage," Rep. Fue Lee of Minneapolis, pointing out that the City of Minneapolis is strapped for cash due to the double whammy of COVID-19 and the riots.

The debris pile that served a backdrop for the Democrats Thursday used to be Chicago Furniture Warehouse, a business started by African immigrant Ibrahim Demaag and his brother.

"We completely lost everything we have dreamed of, what we worked for," Demaag said.

"For you guys to stand and talk about it after nine months I think is a shame for Minnesota, a shame for everyone! You guys need to come to the table, whether you’re Democrats or Republicans."

Senate Republicans have said they'd be willing to help those business owners, provided that none of the money flow through the city government in Minneapolis. GOP leaders blame city leaders for the unrest and evacuating the Minneapolis Police Department's Third Precinct before rioters burned it.

"We've got to find a way for these small businesses that were destroyed that are asking for help, I'm willing to find a way but it will not be through dollars to the City of Minneapolis that's dysfunctional," Sen. Majority Leader Paul Gazelka, a Nisswa Republican, told colleagues on the Senate floor last month.

"But we should also be looking at the Iron Range, and the mining that so many in here (Senate chamber) have stopped? When that's something we hear from them that they need?"

DFL lawmakers back on Lake Street today to make the push for bills that would help businesses hit by rioters recover and remain in the neighborhoods where they’ve built their shops. pic.twitter.com/6ieIamND3m

Gazelka and other Republicans have said voters outside of the Twin Cities Metro area don't want to "bail out" Mayor Jacob Frey and other city leaders by sending aid to help Minneapolis.

But a recent study by the Minneapolis Regional Chamber of Commerce showed Minneapolis generated three times more tax revenue than it receives in state aid. The study estimated Minneapolis residents and businesses send $1.9 billion to state coffers each year while the city receives $536 million in state aid.

"I’ve been frustrated with the narrative of a 'bailout.' What we’re talking about here is not a bailout. It is about asset preservation," Johnathan Weinhagen, the president of the Minneapolis Regional Chamber remarked.

"These corners, these commercial nodes -- they're not only part of the fabric of our community, they’re critical economic drivers to our state."

Rep. Aisha Gomez said the concept of "One Minnesota" is that we take care of people regardless of who's suffering or where the disaster occurs.

GOP lawmakers were angered by disparaging remarks city council members made about police after Floyd was suffocated by an MPD officer during an arrest. That included calls to "defund police" and dismantle the department as we know it and replace it without a different public safety agency.

Senate leaders have continued to put forth a narrative that the city council defunded the police.  In reality, the Council left the MPD's authorized strength at 888 officers.  But the department lost nearly 200 officers since the riots, with some taking early retirement and others going on extended leave for injuries and post-traumatic stress linked to the civil unrest.

The City Council agreed to free up $6 million for training and other costs of getting more officers on the street, in the face of major jumps in violent crimes in the city since Floyd died.  Council members are trying to get a ballot question placed on the 2021 city ballot that would make the MPD a division of a larger public safety department.

Minneapolis leaders are asking the legislature for money to rebuild commercial corridors and aid paying outside law enforcement agency for help providing security during the murder trial of Officer Derek Chauvin. Senate Republicans instead passed a bill that would dock Minneapolis's Local Government Aid payments to pay cities that provide mutual aid to that city.