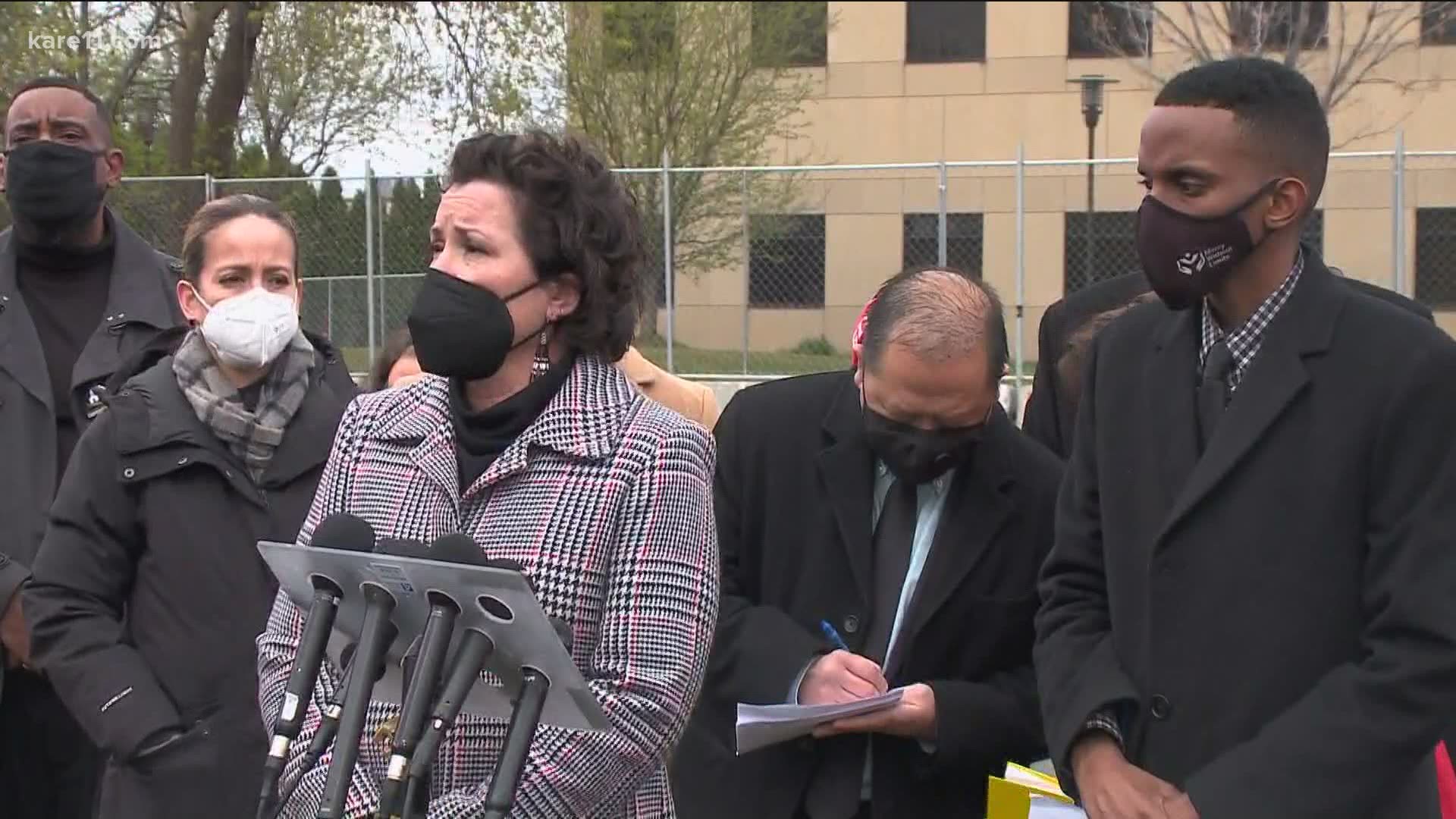 BROOKLYN CENTER, Minn. — The killing of Daunte Wright in this Twin Cities suburb has sparked renewed urgency over pending police reform legislation at the Minnesota State Capitol, at least for those who support the idea.

DFL state senators Wednesday gathered in Brooklyn Center to demand action from the Republicans who control that chamber. The Senate's BIPOC Caucus, Black Indigenous and People of Color lawmakers called for budgets talks to be suspended until after more law enforcement accountability measures are passed into law.

"We lost a young man again and it breaks us all up in so many ways," Sen. Mary Kunesh of New Brighton told reporters outside the Brooklyn Center Police Department.

"He was a community member and our job as a legislator is to ensure the security of our communities."

Brooklyn Center Police pulled over Wright for a suspected license tab violation Sunday, and then attempted to take the 20-year-old into custody after discovering he had an outstanding warrant for failure to appear on a gross misdemeanor violation of possessing a weapon without a permit.

As Wright was about to be cuffed by one officer he jumped back into the driver's seat of his SUV. In a matter of seconds, Officer Kim Potter, rushed toward him and fired a fatal shot from her Glock pistol. Prosecutors charged her with second degree manslaughter because she mistakenly believed she had pointed her Taser at Wright when she pulled the trigger.

Members of Minnesota Senate's POCI Caucus and allied DFL senators appear in Brooklyn Center to call for police accountability reforms that go deeper than the ones passed into law last summer. pic.twitter.com/Zf4toEHA8m

Sen. Melisa Franzen, an Edina Democrat, said she was disappointed to hear Senate Public Safety Committee Chair Warren Limmer of Maple Grove say he won't allow any policy issues to be added to the budget bills his panel is processing.

"But the fact that he is stalling, blocking, every single policy bill that we bring forward is not an excuse to do nothing! We have until May 17th!" Franzen remarked.

Senate Majority Leader Paul Gazelka said Tuesday that he's willing to allow some fact-finding hearings in the next two weeks, in the Public Safety and Transportation Committees, but cautioned that the legislator's priority between now and the end of session will be passing a balanced budget to avoid a government shutdown.

"I’m still willing to have hearing in the Senate and talk about, are there other things we can do," Sen. Gazelka, a Republican from East Gull Lake, told reporters.

"I’m not promising that we’re going to do more reform. I’m promising to listen to see if something is warranted."

Gazelka said he's also trying to strike a balance between responding to public outrage of the use of deadly force by police and at the same time reaffirming the legislature's overall support for law enforcement.

"How do we make sure that we are letting the police know that we appreciate what they do, and the hard work that they do everywhere, in very, very difficult situations, but that we expect police accountability?"

He pointed to reforms passed during July's special session in response to the killing of George Floyd while in custody of Minneapolis officers. Those reforms included a uniform ban on chokeholds within policing agencies, a duty for officers to intervene when other officers are using excessive force, adding more citizens to the POST Board, and creating a database to track officers' use of force.