City of Minneapolis is set to mail 114,000 absentee ballots Friday on the first day of early voting; Minnesota voters have many options for returning those ballots 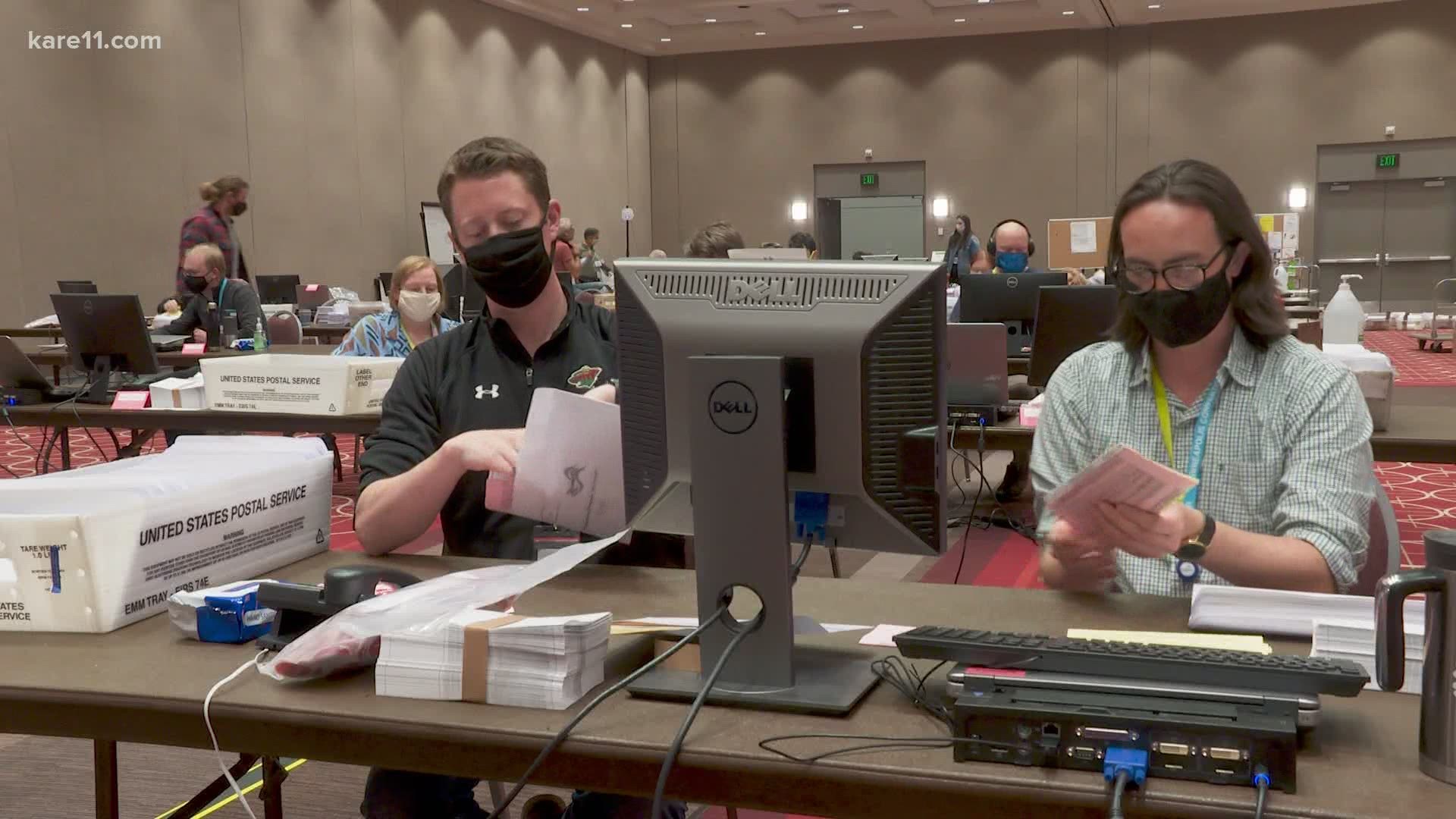 MINNEAPOLIS — Elections administrators across Minnesota are preparing for a surge in absentee mail ballots as the early voting window opens Friday across the state.

They're strongly encouraging people to vote early and by mail if possible, but they're also pledging to go all out to make polling places safer for those who want to do vote in person.

"Tomorrow we will be mailing out over 114,000 ballots. That's phenomenal!" Grace Wachlarowicz, Minneapolis Elections and Voter Services director told reporters.

"There is no previous record that's even close to that."

In the 2018 general election the city boasted of 10,000 early voters. Of course, that was pre-COVID. And, due in part to the pandemic, voters who receive absentee ballots have several options for getting them back to their city and county elections offices before the election.

They can mail them back or walk them into their local elections office. They can also vote early in-person by requesting a ballot at an early voting center in their area.

Minneapolis will also offer curbside drop off for those who don't want to put their ballots in the mail stream.  Dates and locations for curbside will be announced later, according to Wachlarowicz.

"When it comes to the election our priority is accuracy, security and voter service. We are working 24-7 in order to ensure that ballot is accurately counted."

Ballot assembly in full swing in Minneapolis ahead of Friday's first day of absentee early voting in Minnesota pic.twitter.com/6VFxdb7jtF

Due to the influx of mailed absentee ballots and the growing popularity of early voting, Wachlarowicz moved her ballot assembly operation to the Minneapolis Convention Center.

It's a secure space that will accommodate the volume of mail and allow for 150 to 200 staff members to be socially distanced while processing applications and receiving and reviewing the completed ballots envelopes awaiting tabulation.

When asked if she thinks the mail system can handle the load Wachlarowicz said she knows postal workers will do everything they can to protect those ballots and deliver them.

"We’ve got a very good relationship with our local post office, and they work very closely with us to make sure that any ballot they receive we get."

Making it easier to cast a vote

Because of the extraordinary circumstances surrounding the coronavirus crisis absentee voters will have a longer grace period in November. Any ballot that is postmarked on or before Election Day can arrive up to seven days after the election and still be counted.

You can apply for an absentee ballot through your local city or county elections offices. You can also apply by going to the Minnesota Secretary of State's MNvotes.org website and track the status of your ballot at the same site.

The ACLU of Minnesota announced a lawsuit settlement Thursday night that will result in the Secretary of State's office mailing ballot applications next week to every registered voter who hasn't already requested one.

Hennepin County Elections Director Ginny Gelms said that 250 seasonal workers will be added to help process the wave of absentee ballots, and that money from the CARES Act for COVID relief is helping pay for that and other work being done to make polling place more virus-proof.

Related: A variety of options for voting in Hennepin County

Gelms said electronic poll books will also allow elections workers to update the voter rosters quickly, which will make it extremely difficult for someone to vote both by mail and in person.  If someone's mail-in ballot has already been received the poll roster will show that, preventing them from voting a second time.

If a person votes in person that will be logged as well, and any mail-in ballot from the same voter would be tossed and not be counted.  It's one of many safeguards in place to ensure that each voter only votes once. 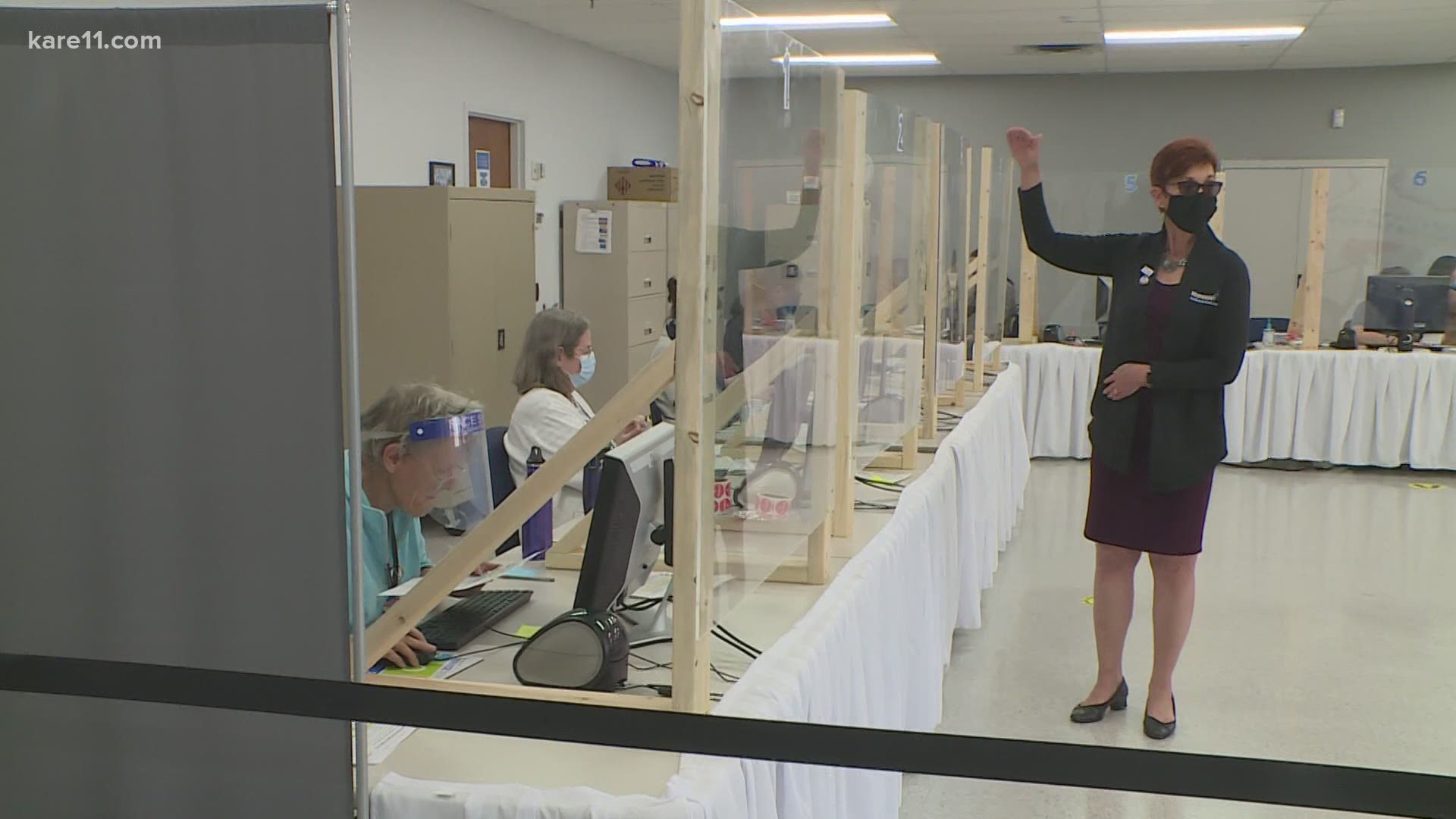