Court: Late-arriving Minnesota absentee ballots must be separated, may not be counted

The ruling casts doubt on whether absentee ballots received after Nov. 3 will be counted. 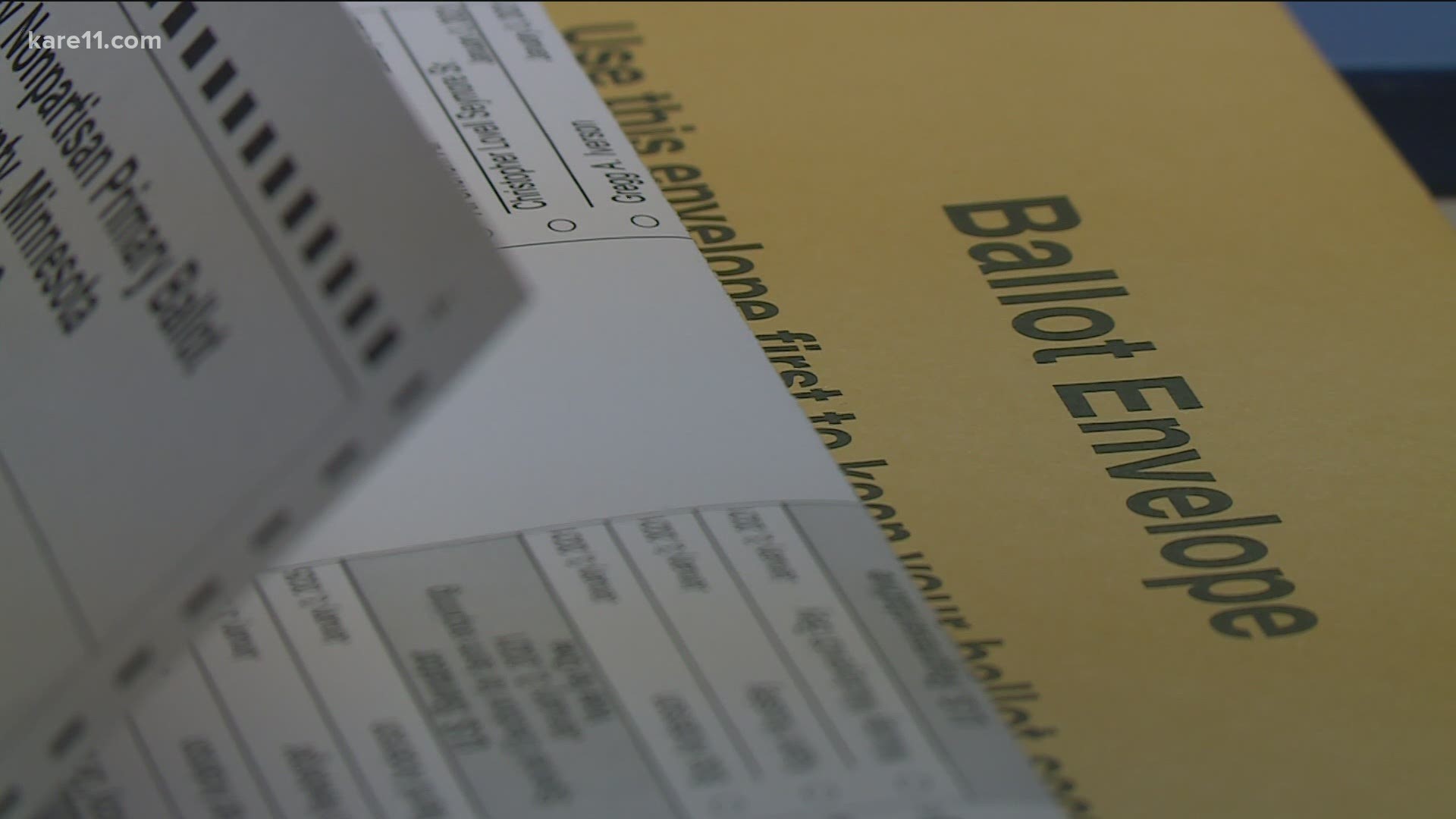 A ruling by the 8th Circuit Court of Appeals Thursday has thrown uncertainty into Minnesota's absentee ballot process, with less than a week until the election.

In a ruling issued Thursday, the 8th U.S. Circuit Court of Appeals ordered absentee ballots arriving after Election Day to be separated and potentially removed from the final vote totals, depending on future court rulings.

In the 8th circuit's ruling, the majority opinion suggested all absentee ballots should be received under state law by county election offices by 8 p.m. on Election Day, Tuesday, Nov. 3.

Minnesota Secretary of State Steve Simon said Friday morning in a call with reporters that if the state decides to appeal the decision to the U.S. Supreme Court, an announcement should be made sometime Friday afternoon. 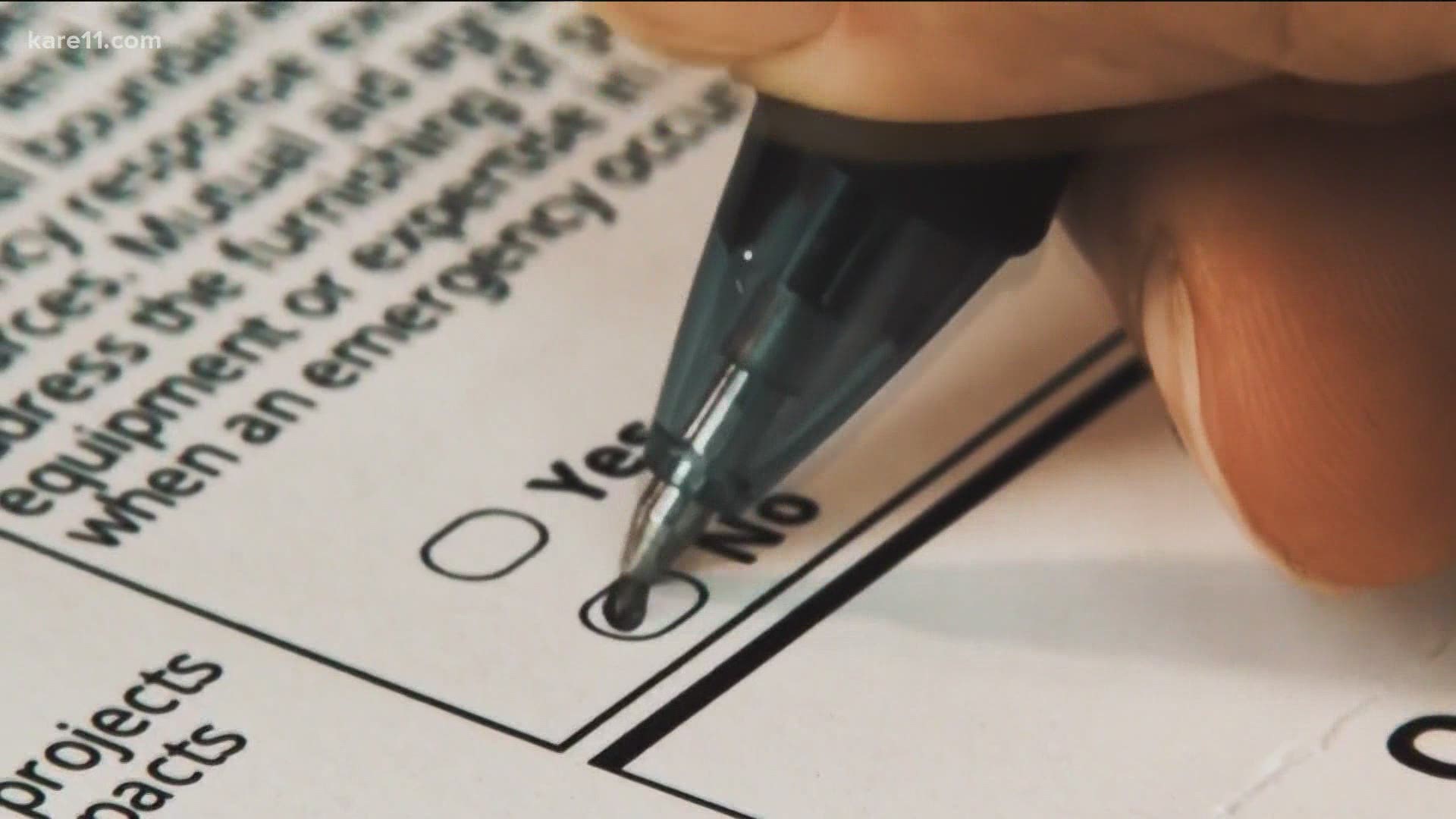 "The democratically-enacted election rules in Minnesota provide that mail-in votes must be received by 8:00 p.m. on Election Day in order to be counted (or 3:00 p.m. if delivered in person). Minn. Stat. § 203B.08. The rule of law, as established by the United States Constitution and the Minnesota Legislature, dictates these rules must be followed notwithstanding (Secretary of State Steve Simon's) instructions to the contrary," the ruling stated. "There is no pandemic exception to the Constitution."

In a dissenting opinion, one of the judges noted the late date of the ruling, and its potential impact on Minnesota voters.

"The court’s injunctive relief has the effect of telling voters—who, until now, had been under the impression that they had until November 3 to mail their ballots—that they should have mailed their ballots yesterday (or, more accurately, several days ago). With the court’s injunction in place, fewer eligible Minnesotans will be able to exercise their fundamental right to vote. That, in and of itself, should give us significant pause before granting injunctive relief," Judge Jane Kelly wrote in her dissent.

Officially, the ruling orders Secretary of State Steve Simon to separate any absentee ballots received after the Election Day deadline as the legal process continues.

"The Secretary and his respective agents and all persons acting in concert with each or any of them are ordered to identify, segregate, and otherwise maintain and preserve all absentee ballots received after the deadlines set forth in (Minnesota law) ... to be removed from vote totals in the event a final order is entered by a court of competent jurisdiction determining such votes to be invalid or unlawfully counted," the ruling's conclusion stated.

U of M political science and law professor Tim Johnson said the essence of the lawsuit comes down to the separation of powers between the state legislature and the state executive branch. According to Johnson, the opinion is saying that  the Secretary of State, who is legally part of the executive branch, does not have the authority to alter state election dates. Johnson says if the state legislature would have spelled out these dates itself in a new law, there would be no lawsuit.

According to Simon, he has the option to take the ruling to the Supreme Court, but hasn't made a decision whether that action will be taken.

"We're huddling, as you might imagine, we have already and will again this evening with our attorneys at the Attorney General's office to figure out precisely what the course of action is," Simon said. "But just so everyone knows, to be mindful of, we're not the only similarly situated party. There are outside, so called 'interveners,' who also have standing to do the same thing. So, we need to know what they're doing, and then we need to figure out what we're doing.

"We don't want to do anything hastily – time is of the essence, obviously – but we want to make sure that we're doing things very carefully and thoroughly."

According to Simon, nearly 400,000 mail-in ballots are still outstanding, but he added that they could still be in transit or haven't yet been mailed, so he continued to urge people, if they still have their ballots, to drop them off in person.

“The court's decision is a tremendous and unnecessary disruption to Minnesota's election, just days before Election Day," Secretary of State Simon said in a statement. "This last-minute change could disenfranchise Minnesotans who were relying on settled rules for the 2020 election — rules that were in place before the August 11 primary and were accepted by all political parties. It is deeply troubling that the people who brought the lawsuit, a conservative legislator and presidential elector, would seek to sabotage the system for political gain.

"I won’t let any Minnesota voter be silenced," Simon added. "My mission is now to make sure all voters know that a federal court has suddenly changed the rules, and that their ballot needs to be received by Election Day."

In an interview on CNN following the ruling, Gov. Tim Walz said the state will do everything it can to ensure all votes are counted.

"What I’d tell people is that this ruling means they’ll segregate those ballots. But well over 1.2 million ballots have already been received," Walz said. "I would tell voters if you have a ballot in your hand now, drop it off in person."

"The pandemic has caused upheaval in many areas of life but hiding behind the pandemic to manipulate the election process is not democratic, and we appreciate that our laws and interpretation of those laws matter," Minnesota GOP chair Jennifer Carnahan said in a statement. "The Republican Party of Minnesota encourages Minnesotans to either vote absentee in person or vote in person on Election Day. Nobody should be disenfranchised because of the Democrats unconstitutional actions."

WHAT VOTERS CAN DO

For voters, the best way to ensure their ballots are counted is to monitor any ballot that has already been placed in the mail.

Voters who recently mailed their ballots who may be concerned about meeting the Nov. 3 deadline can choose to cast their vote during in-person early voting or on Election Day at their regular polling location instead. Doing so will cancel the mailed ballot, and it will not be counted, even if it is received by the Nov. 3 deadline.

Most importantly, the Secretary of State's office notes that absentee ballots cannot be dropped off at a polling place on Election Day, they must be returned to the county election office.