The latest developments on election results and all things Election 2020. 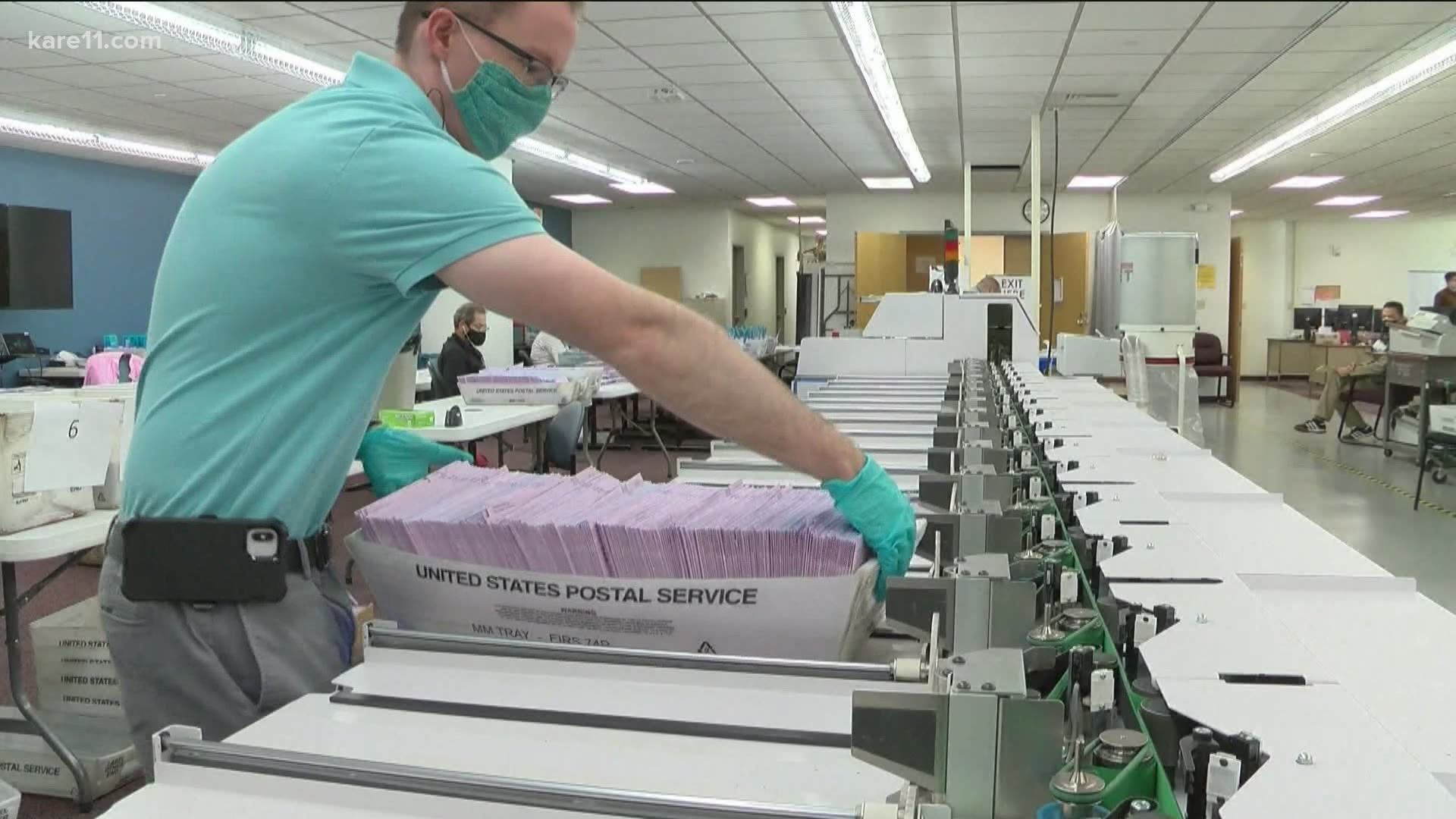 The Minnesota Secretary of State's Office reported Wednesday morning that Craig had 48% of the vote to challenger Tyler Kistner's 46%, with 100% of precincts reporting. A spokesperson with the Secretary of State's Office told KARE at the time that an official projection had not been made due to a court order requiring absentee ballots that arrived after Election Day to be separated.

"I just called Angie Craig and congratulated her on her victory. I am humbled and honored by all the support I have received from Minnesotans across the Second Congressional District," Kistner said in a statement. "Despite lots of confusion in this race caused by Rep. Craig's lawsuit and the courts, we were able to outperform the top of the ticket by 5% and raise more money than any GOP challenger ever in the Second District."

The election has set the stage for more partisan gridlock at the Minnesota Capitol.

With little change in the balance of power, Democrats and Republicans are likely to continue to struggle to find common ground. The two sides were unable over the past two years to agree on a bonding bill until last month. And they’ve bitterly split over whether to keep allowing Democratic Gov. Tim Walz to deal with the coronavirus pandemic via executive orders. 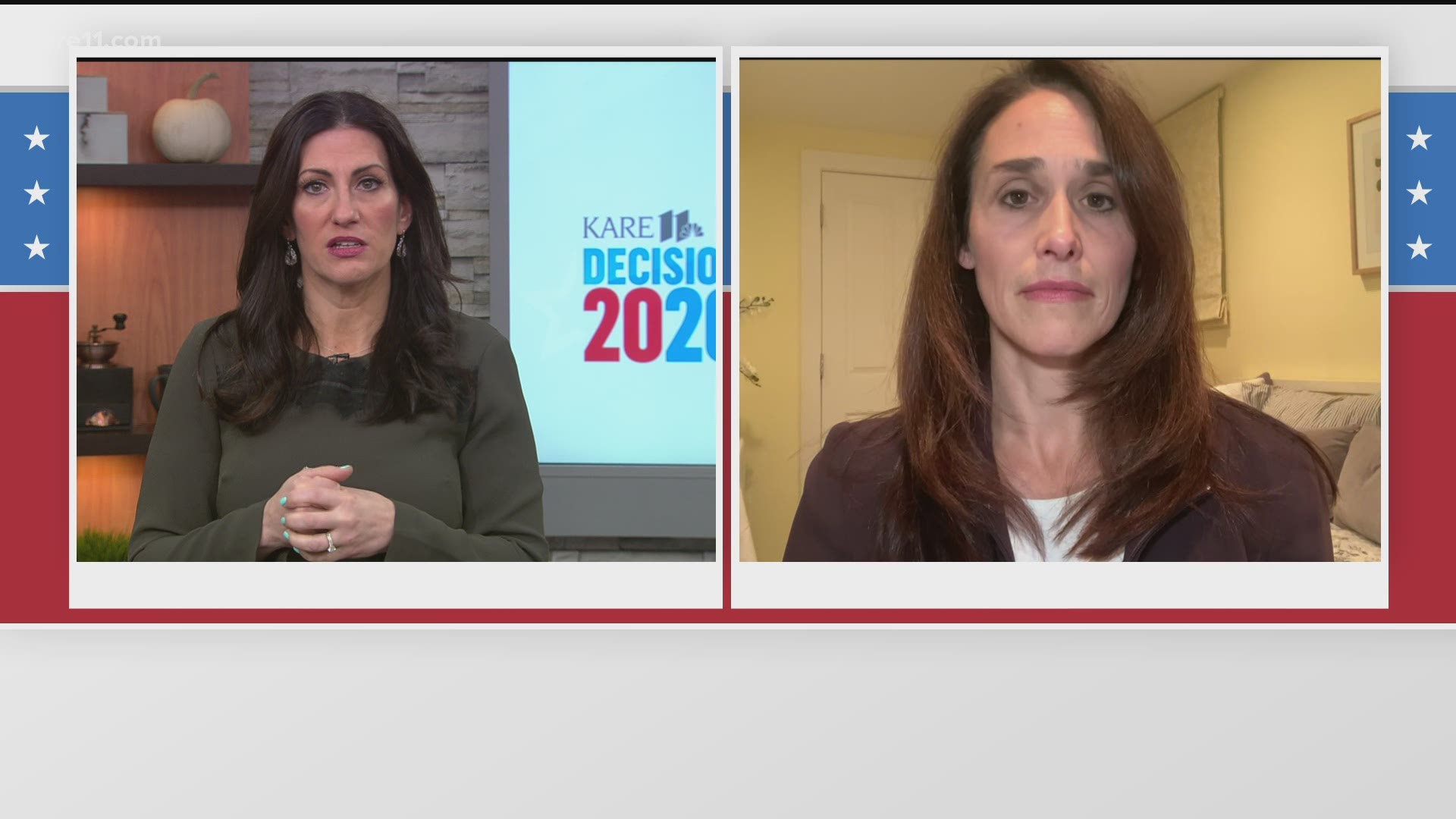 "The race for Congress in the Second District still remains extremely close," Kistner said in a statement. "Because of the unknown number of how many ballots are still outstanding, we owe it to the voters who waited for hours to cast their ballots before making any final judgements on this race. My team is working diligently to get the most up to date information. We have and will continue to respect the process."

The Secretary of State's Office declared 100% of ballots in the race to be in Wednesday morning, with Craig holding a 202,597 to 193,505 edge in votes. However, the Associated Press has not yet officially called the race for Craig.

Secretary of State Steve Simon tells KARE 11 the reason that race and District 1 have not been called is tied to the court order mandating that mail-in ballots received after Election Day need to be separated.

The Minnesota Secretary of State Steve Simon said that while all elections are difficult and challenging this one was a special scenario due to the pandemic but that the state pulled off a “textbook” election regardless.

Minnesota has a decentralized system for counting ballots that is handled at the local level, and Simon said that despite pandemic challenges everything went smoothly.

There is no evidence at this point of any malicious attacks or hacking attempts on Minnesota elections, Simon said.

Dealing with an unprecedented number of mail-in ballots will take some time, Simon said.

There are 240,000 outstanding absentee ballots. This number has a lot of caveats, it’s likely a much smaller number but it will never get to zero because it includes people who live in districts that only vote by mail, Simon said.

Ballots received by 8 p.m. last night still have two days to be counted. Ballots postmarked by yesterday and received in the mail Wednesday or Thursday are also yet to be added to the total voting numbers.

Ballots that arrived today or will arrive tomorrow will be segregated but will still be added to the total number pending legal action, Simon said. 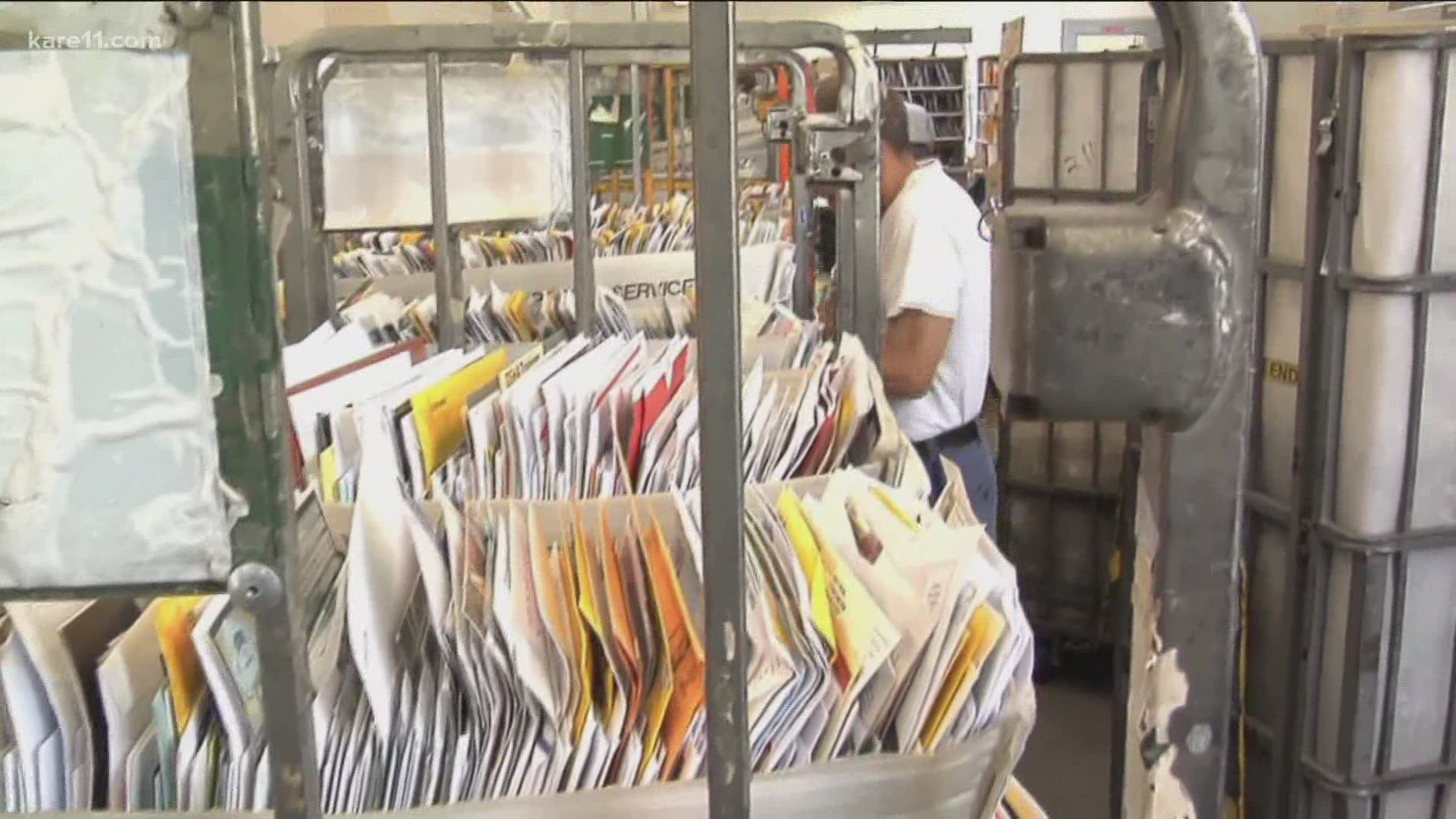 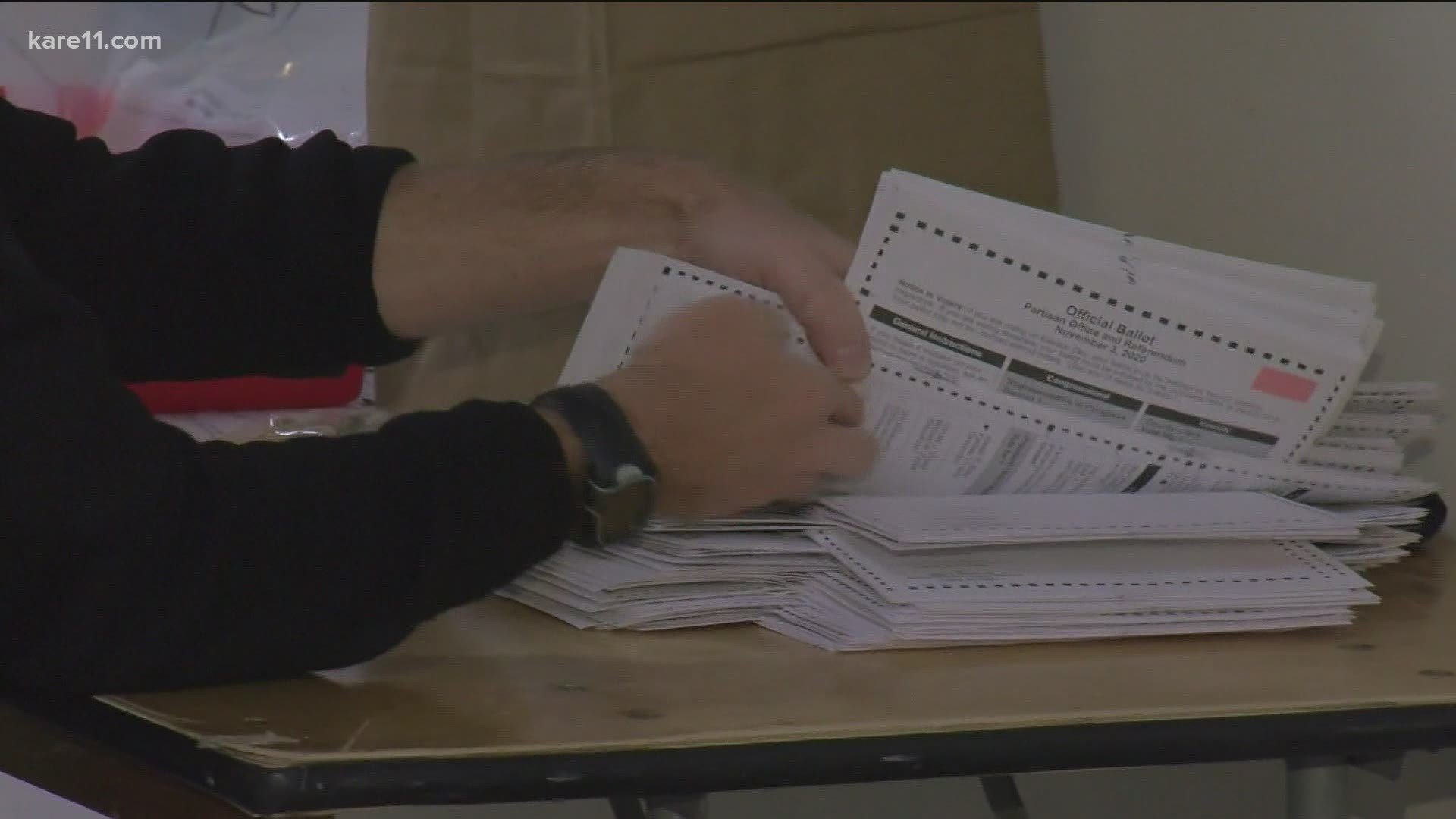 The Trump campaign announced that it will demand a recount in Wisconsin, shortly after state election officials said that the votes are in but are being certified.

Wisconsin's chief election official, Meagan Wolfe, said on a Zoom call Wednesday that election staff is assisting clerks as they start the process of triple-checking results. The canvass process begins Wednesday before they can certify results.

Wolfe said that despite high numbers of absentee ballots in Wisconsin, "the evening proceeded in a very normal fashion. Our election was executed with precision."

Wolfe said on Election Night according to Wisconsin state law, each municipality submits their unofficial result to the county, and the county posts those results. There is no certified aggregate of results at that point. She said she feels "100% confident" that the elections were carried out correctly, and according to law.

Wolfe said one township with less than 300 voters - Willow - is still working to get their ballots counted and posted, but "beyond that we have no reason to believe that there are any other ballots that have not yet been counted."

The tight presidential race is hinging on a few key battleground states, Wisconsin being one of them. As of 11:25 a.m. on Wednesday, the Associated Press had Joe Biden ahead by 1% in Wisconsin with 95% of the expected vote in.

If the race stays within a single percentage point, the losing candidate can force a recount - as happened in 2016. If the margin is 2.5% or lower, the state pays for the recount - but it still has to be requested. There are no automatic recounts in Wisconsin.

"We've had practice in this," Wolfe said.

The recount is conducted at the county level - not the municipal level. There are 72 counties in Wisconsin. Wolfe said that often those counties will bring in help to recount.

The Trump campaign has already promised to demand a recount.

“Despite ridiculous public polling used as a voter suppression tactic, Wisconsin has been a razor thin race as we always knew that it would be," campaign manager Bill Stepien said in a statement Wednesday just before noon. "There have been reports of irregularities in several Wisconsin counties which raise serious doubts about the validity of the results. The President is well within the threshold to request a recount and we will immediately do so.”

Wolfe responded to that statement Wednesday, saying, "Elections are a meticulous process. So everything is recorded by your local election official. If there's anything abnormal that happens they record it ... so there's a paper trail for everything."

Wolfe said that the 2016 recount in Wisconsin "showed that we have a really good process."

"I believe that that would be the case if we had a recount again in our state," she said.

Wolfe emphasized that the process for canvassing and certifying votes in Wisconsin is public, and anyone can observe it happening in person.

"If you're skeptical about the process, engage," Wolfe said.

Officials added that the numbers reported in the media are aggregated by journalists and taken directly from the counties. The state has not collected votes from the counties yet. "They are generally very accurate, but they are not official."

Wisconsin also has provisional ballots, which can be issued to voters who marked their ballot in time for the election but were unable to present proper documentation to the poll workers at the time. Those voters have until 4 p.m. Friday to hand in that provisional ballot.

Wolfe said that historically, there have been fewer than 1,000 provisional ballots issued in a general election. That tally has not yet been entered, but Wolfe expected to know shortly how many are out. "We're not seeing anything to indicate that we would have more provisionals than usual," she said.

Those provisional ballots and up to 300 from the township of Willow are the only ballots potentially still uncounted, Wolfe said. All absentee ballots had to be in by 8 p.m. on Election Day, and have been counted.

Unofficially, Wolfe said that it looks like Wisconsin had higher turnout than it did in 2016.

Incumbent Democratic Congresswoman Angie Craig is declaring victory after a hard-fought battle for the 2nd District seat. After a tough race with Republican challenger Tyler Kistner remained too tight to call overnight, the Secretary of State's Office declared 100% of ballots to be in Wednesday morning, with Craig holding a 202,597 to 193,505 edge in votes. However, the Associated Press has not yet officially called the rate for Craig.

"While it took longer than expected, I have said throughout this race that every voter in our district must have an opportunity to make their voices heard – and I am so thankful to the tireless election judges that counted votes throughout the night to ensure that was the case," Craig said in a released statement. "I am so grateful to the people of this district for giving me an opportunity to return to Congress to continue this important work – and I look forward to fighting for them in the 117th Congress.”

The battle between Craig and Kistner became increasingly heated following the death of Legal Marijuana Now candidate Adam Weeks. Minnesota law called for the contest to be moved to a special election in February. Craig filed suit to have the election stay in November and won, followed by Kistner suing to have her victory overturned. The U.S. Supreme Court eventually decided not to hear the case.

While Craig is declaring victory, the Associated Press has not yet called the election in her favor. The same is true in the 1st Congressional District, where incumbent Jim Hagedorn claimed victory over Democratic challenger Dan Feehan late Tuesday. KARE 11 reached out to Secretary of State Steve Simon, who said the reason those races have not been called is tied to the court order mandating that mail-in ballots received after Election Day need to be separated.

Neighboring Wisconsin remains one of six states who still have not declared a winner in the Presidential showdown. With 97% of results in Joe Biden is at 49.5% with 1,630,337 votes, and President Trump at 48.8% with 1,609,640 votes. The other states that are still out are Georgia, Michigan, Nevada, North Carolina and Pennsylvania.

The Associated Press says if the current narrow margin stands, Trump can request a recount. It was Trump's victory in Wisconsin four years ago that brought him the White House by breaking through the Democrats’ “blue wall,” which also included Michigan and Pennsylvania.

In Minnesota, as of Wednesday morning all but two Congressional Districts have projected winners, according to the Associated Press.

In CD-1 the faceoff between incumbent Republican Jim Hagedorn and Democratic challenger Dan Feehan remains too close to call. Hagedorn defeated Feehan in 2018 by a narrow margin.

CD-2 pits incumbent Angie Craig against challenger Tyler Kistner. This race had been pushed to February after the death of Legal Marijuana Now Party candidate Adam Weeks. Craig won a challenge in court to move the election back to November 3.

Races projected across the rest of state includes a U.S. Senate win for incumbent Tina Smith, a win in Minneapolis’ 5th district for incumbent Ilhan Omar, and a win for Michelle Fischbach in Minnesota’s western 7th Congressional District. Fischbach unseated 30-year incumbent Collin Peterson to become the first Republican to represent the area in decades.

On Tuesday night, the Associated Press projected Joe Biden as the winner in Minnesota just after 11 p.m.

Biden led President Donald Trump 54% to 44% in the state as of that time Tuesday, with 61% of precincts reporting.

As Minnesota voters wait for the results from the 1st and 2nd Congressional Districts, officials continue to recommend patience out of respect for the American democratic process.

Here’s the bottom line: the people will decide the outcome of this election.

No matter how long it takes, our democracy requires we respect the will of the people.