Dozens of KARE 11 viewers shared their thoughts and photos as they witnessed Kamala Harris become the first female, Black and Asian-American Vice President. 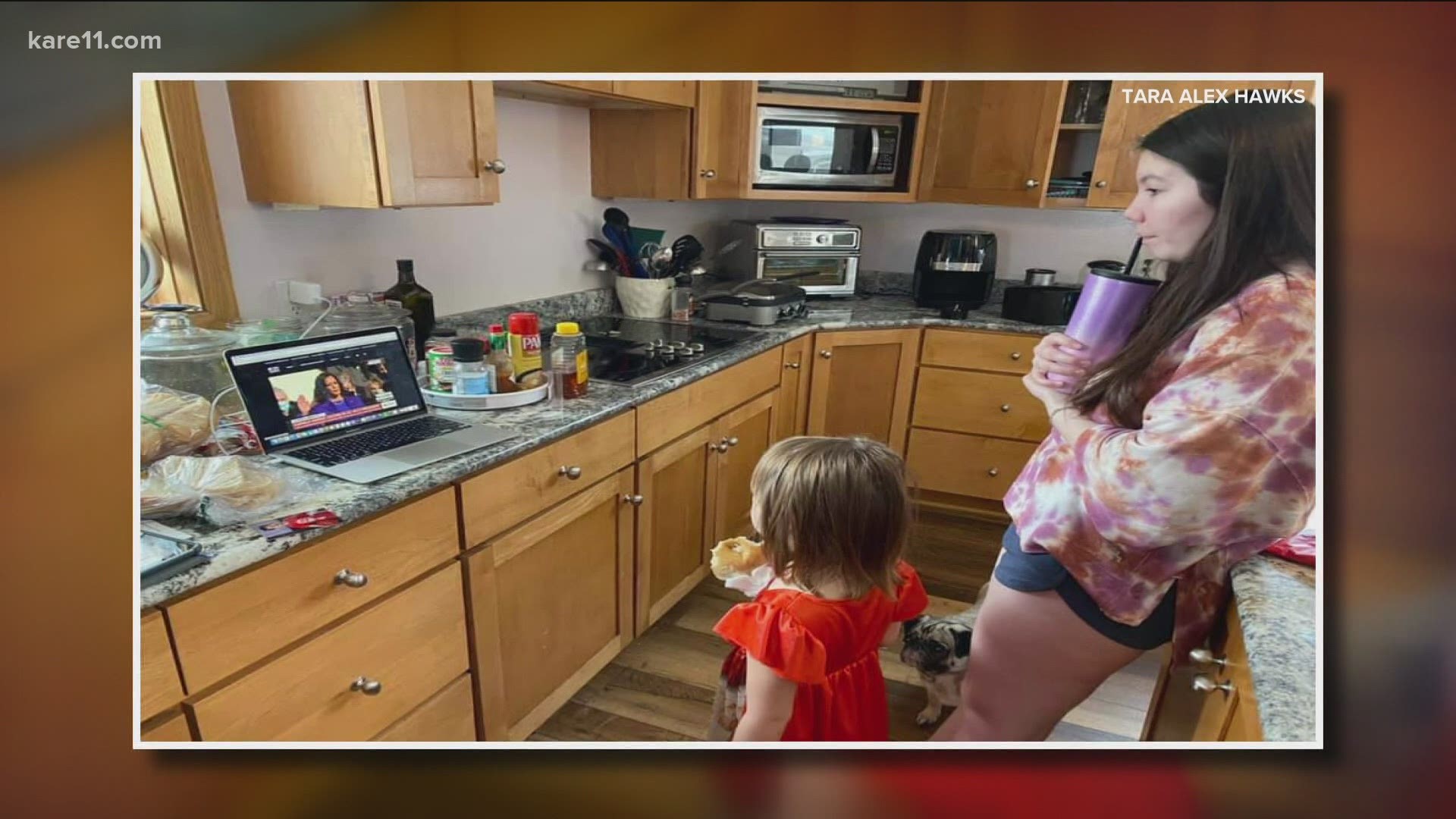 MINNEAPOLIS — The Inauguration ceremony does not feature a speech from the Vice President, but when Kamala Harris took the oath of office on Wednesday, the history of the moment echoed throughout the country.

Dozens of KARE11 viewers shared their photos from the moment they witnessed Harris become the first female, Black and Asian-American Vice President.

Sarah Wotipka, posted a photo on the KARE 11 Facebook page, writing, "There may have been tears as I watched my daughter watching her."

Tara Alex Hawks wrote, "As a woman of mixed racial identity this means that someone like me is leading us. It means my girls see that they have a spot at the table."

During her introduction at the Inauguration ceremony, Minnesota Senator Amy Klobuchar acknowledged the significance of the moment.

"When she takes the oath of office, little girls and boys across the world will know that anything and everything is possible," Klobuchar said. "In the end, that is America."

As they watched, many viewers made sure to wear pearls, a nod to Harris' favorite accessory. Pearls hold a special significance and symbolism for Vice President Harris' sorority, Alpha Kappa Alpha, the country's first Black sorority.

"This was the moment and the time for me to pass my mother in law's pearls down to my daughter," said Twin Cities radio and podcast hose, Sheletta Brundidge. "We talked about the significance of these pearls and the strength of African American women."

Brundidge didn't just celebrate with her 7 year old daughter, Cameron, and her sons. She also connected with her 100 year old great grandmother, who spent years cooking for freedom fighters and celebrated from afar on Wednesday morning.

"Her prayer was that she'd just live to see today," Brundidge said. "She got pneumonia this week and she was rushed to the hospital, but from her hospital bed she saw the first African American woman be sworn in as Vice President of these United States of America. It's the history of Kamala history and all these unnamed, unspoken of African American women who made today possible that really resonate with me and that touched my soul in an amazing way."

And women weren't the only ones celebrating.

"It makes my heart flutter a little bit, even just thinking about it," said University of Minnesota Political Science professor, Tim Collins, who watched with his 11 month old daughter, Eleanor. "It almost makes me tear up, that she can, that a woman can, be vice president or president. That is something that I'm proud she'll be able to grow up with. That will be an assumption and then the premise that she lives through her whole life, knowing that that's possible."

For some the only regret was not being able to celebrate with everyone they had hoped.

"For me, as your principal, I wish we could have all been here together," said Minneapolis North High School principal, Mauri Friestleben, who addressed her students virtually on Wednesday. "As a woman and a mother of four girls, to see another woman put her hand on that bible and take that oath, it just felt amazing. Girls, I hope you're out there, I hope you're watching, I hope you know that any position that is good enough for a man, is good enough for you."

KARE11 viewers weren't the only ones to share their thoughts during the history making moment. Former reporter Adrienne Broaddus, who is now a correspondent for CNN, wrote on Twitter, "My Vice President looks like me. My Vice President is my sorority sister. She also wraps her hair at night with a silk scarf to protect her locks just like me. @KamalaHarris gives us permission to finally believe we can become anything. Watching #InaugurationDay on @CNN."

My Vice President looks like me. My Vice President is my sorority sister. She also wraps her hair at night with a silk scarf to protect her locks just like me. @KamalaHarris gives us permission to finally believe we can become anything. Watching #InaugurationDay on @CNN. pic.twitter.com/clZqj7Nwlw