Last year, Gov. Walz made his State of the State address at the Governor's Mansion discussing the uncertainty surrounding the COVID-19 pandemic. 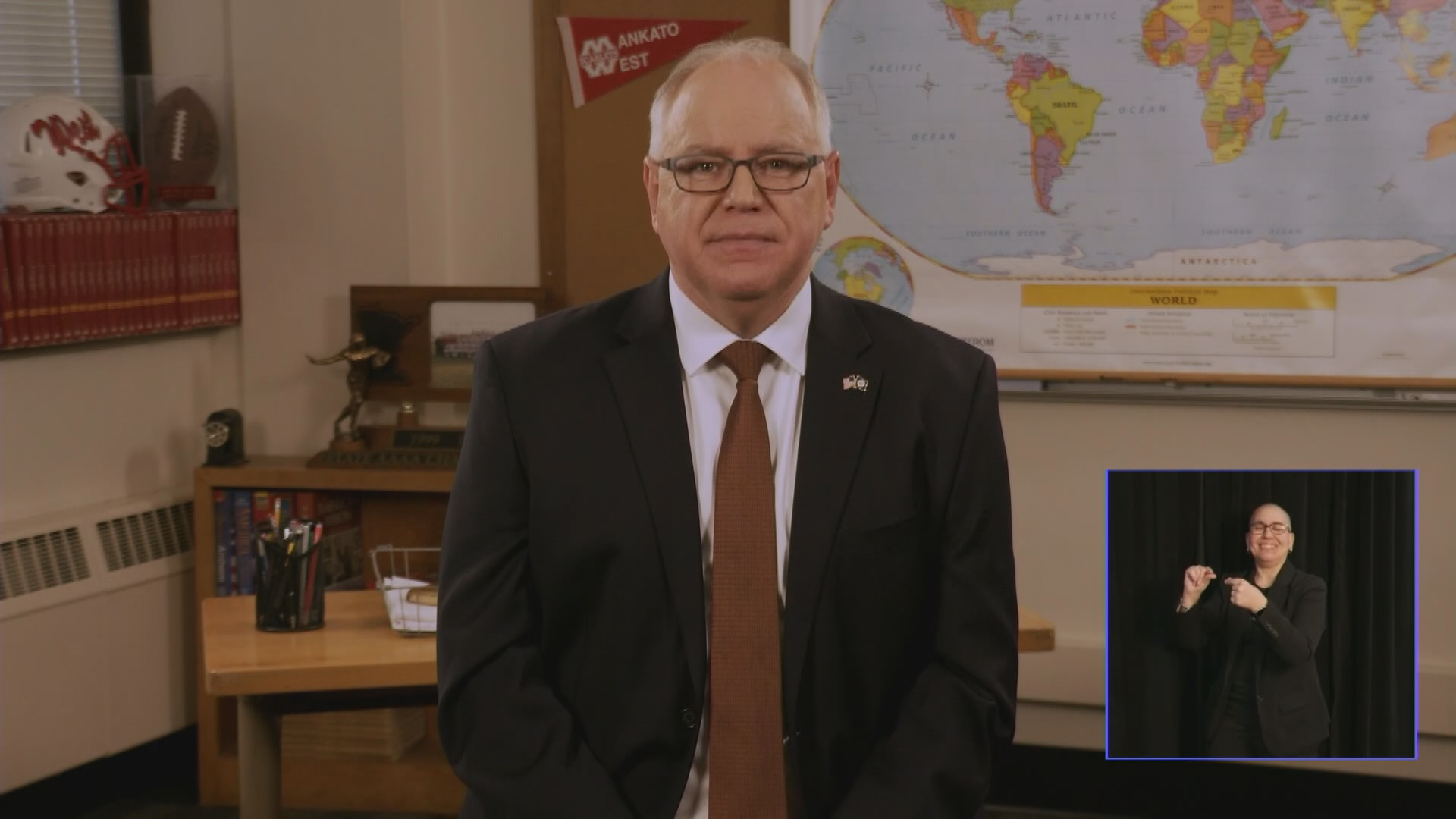 He began the address by reflecting back on the past year and the uncertainty surrounding the COVID-19 pandemic, which was just in its early stages. Gov. Walz reminded Minnesotans of the toll the pandemic took on the state – and the country – by addressing the more than 500,000 confirmed cases and the nearly 7,000 deaths due to COVID-19.

"Grandmas. Grandpas. Mothers. Fathers. Daughters. Sons. Sisters. Brothers. Friends. Coworkers. To everyone who has lost someone they care about this year, Minnesota’s heart breaks for you," said Gov. Walz. "Your grief is unimaginable. I know words can’t ease your pain. Time doesn’t erase it—it just changes it."

Gov. Walz highlighted the vaccination process statewide, stating more than 1.5 million Minnesotans have already received the vaccine, including 80% of seniors. He added that two-third of the state's school and child-care workers have been vaccinated, and expressed his optimism as the eligibility requirements for the vaccine continue to loosen. On Tuesday, all Minnesotans 16 years of age and older will be eligible to receive the vaccine.

"Over 90% of our students are back in person learning in classrooms just like this one," Gov. Walz said. "Minnesotans are gathering again and heading back to their favorite restaurants and bars. The Twins are preparing to have fans in the stands on opening day. Normalcy is on the horizon, and Minnesotans are eager to embrace the simple pleasures of life."

While highlighting the upcoming steps, he also expressed concern with the rising case numbers as of late, and reminded Minnesotans to stay vigilant as restrictions continue to loosen.

"The only way we will truly beat this virus is by continuing to socially distance, wear a mask, and get tested," Gov. Walz said. "Most importantly, Minnesotans need to get vaccinated."

Walz acknowledged all the sacrifices people have had to make over the past year: cancelled trips, proms, graduations and weddings, as well as the daily impacts throughout the pandemic such as wearing masks, gathering in small groups and staying home.

"You sacrificed. You endured. And you saved lives," said Gov. Walz. "These selfless acts embody Minnesota’s dedication to community—and you proved once again that there’s nothing our state can’t do when we come together."

Gov. Walz concluded his speech by addressing equality and the changes he's made to the Minnesota criminal justice system.

On the evening before the trial of former Minneapolis police officer Derek Chauvin, who has been charged with murder in the death of George Floyd, Walz discussed the bipartisan police accountability legislation he signed, banning neck restraints like the one used on Floyd while he was in police custody.

"It was an important first step, but it was only a first step," Gov. Walz said. "More must be done."

Gov. Walz recalled a speech Dr. Martin Luther King, Jr. made at Mankato West High School back in 1961, discussing racism and inequalities nationwide. During his speech, Dr. King spoke about change and how to inspire that change through nonviolent protests.

He added that equality must also occur in the school system, helping people of all communities and backgrounds receive the best education possible.

"Inequality in our education system long predates the pandemic," Gov. Walz said. "For far too long, the quality of a child’s education in Minnesota has been determined by their race or zip code. Children of color and children in Greater Minnesota face barriers to the opportunities they need to reach their full potential."

Senate Majority Leader Paul Gazelka released a video ahead of Gov. Walz's address, saying the state is hopeful due to vaccine availability, but urged the governor to provide "clear guidance" on when the pandemic and his emergency powers will end.