Gov. Walz to work from home for now

Minnesota governor goes into self-quarantine mode after a member of his security detail tests positive for COVID-19. 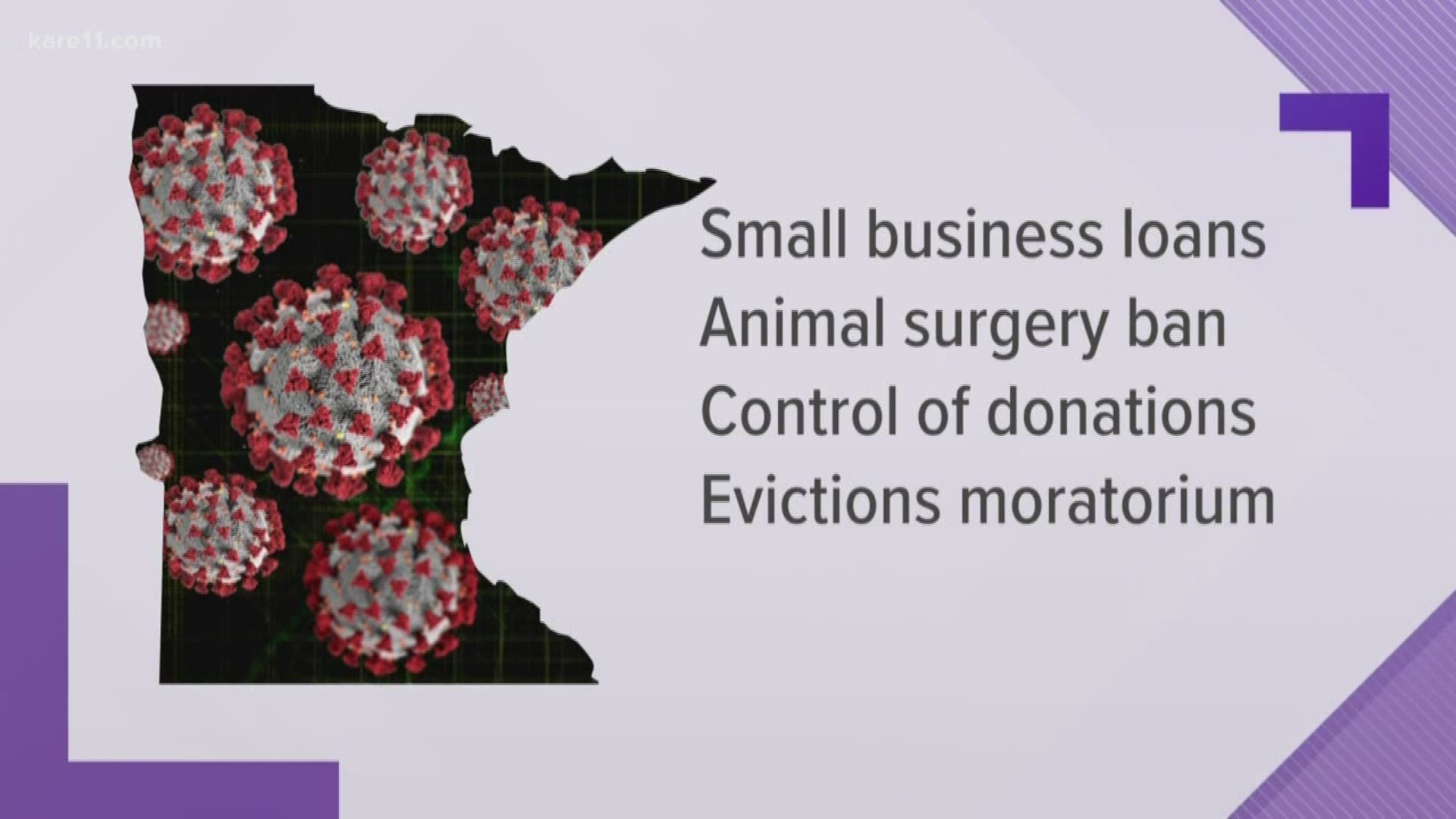 Then, Sen. Amy Klobuchar revealed her husband, John Bessler, was hospitalized in Virginia and being treated for coronavirus.

And finally, Gov. Tim Walz announced he had placed himself in self-quarantine because a member of his security detail had tested positive for coronavirus.

"I do not have any symptoms, and accordingly I have not taken a test, so we'll move forward," Gov. Walz told reporters in a conference call from the Governor's Residence in St. Paul.

"But it's important to note between 40% and 80%, the vast majority of Minnesotans, are going to become infected at some point. This whole battle is about bending the curve, lengthening out the infection rates."

Walz said the state's Emergency Operations Center was up and running, and many essential state workers were already working from home and taking part in teleconferences to confer with other parts of their teams.

The governor said he's not ready yet to order Minnesotans to shelter-in-place, which is happening in neighboring Wisconsin. He said he's waiting to see if the steps he's already taken - closing schools and restaurants, stopping large gatherings - will work to slow the spread of the virus.

And, while the governor didn't appear before TV cameras Monday, he did issue four new executive orders as part of the ongoing response to the global pandemic. Those included the following:

Gov. Walz praised Minnesota citizens, companies and nonprofits for their donations of masks and other medical supplies. The inventory will help the state create a centralized clearinghouse to direct supplies to where they're needed the most.

"This is a partnership together, that gives us a better eye about what’s out there," Walz said, while noting the state's own warehouse of personal protective equipment and other medical gear is starting to build up again.

On the temporary evictions ban, Gov. Walz encouraged people who can still make their rent and mortgage payments to keep making them. But those who can't shouldn't be left without places to live at a time when the state's going all out to stop the spread of coronavirus.

"We can’t put people out in the streets," Walz told reporters in the conference call. "(Evictions) will not do anything in terms of stopping the spread of this and, of course, it will be personally cruel and counterproductive to what we’re trying to do."

RELATED: Live updates: Walz not ready to issue 'shelter in place,' but 'soon could be'

Lieutenant Gov. Flanagan hasn't been in the same room with Walz to make sure they don't both become ill at the same time. She took to Twitter Monday night with a video seeking to reinforce the reasons behind the halt on evictions.

"When we're asking people to stay at home whenever possible stable housing is as critical as ever," Lt. Gov. Flanagan said in her Twitter video.

"But it's hard to stay home when you feel sick if you need to work, or you lost your job and you need to pay your rent."

Earlier in the day, Flanagan had gone to Instagram to announce that her brother Ron, an ex-Marine who'd been battling cancer, had died from coronavirus in Tennessee.

"To many, he’ll be a statistic: Tennessee’s second COVID-related death," Flanagan, "But to me, I’ll remember a loving, older brother, uncle, father, and husband."

She turned part of her grief into a reminder that even people who aren't affected much by the virus can give it to those who are at risk of severe complications.

"If you feel fine, that’s great. But please consider the possibility that you’re carrying the virus and don’t know it, and then you walk past the next Ron, my big brother, in public."

Minnesota added 66 new positives Monday, bringing the statewide total to 325. So far 24 of those cases have resulted in hospitalization, and one of those patients has died.

Minnesota Health Commissioner Jan Malcolm cautioned that the actual numbers are probably higher due to the backlog in testing and the fact that many of those who are infected don't show symptoms until at least a week after they've been infected.

"With confirmed community spread we know there are more cases in Minnesota and the virus is circulating in communities. In fact, we should assume it’s in all of our communities," Malcolm told reporters.

The commissioner also noted that the healthcare workers who've been infected thus far had travel-related exposure, rather than catching it on the job from a patient.