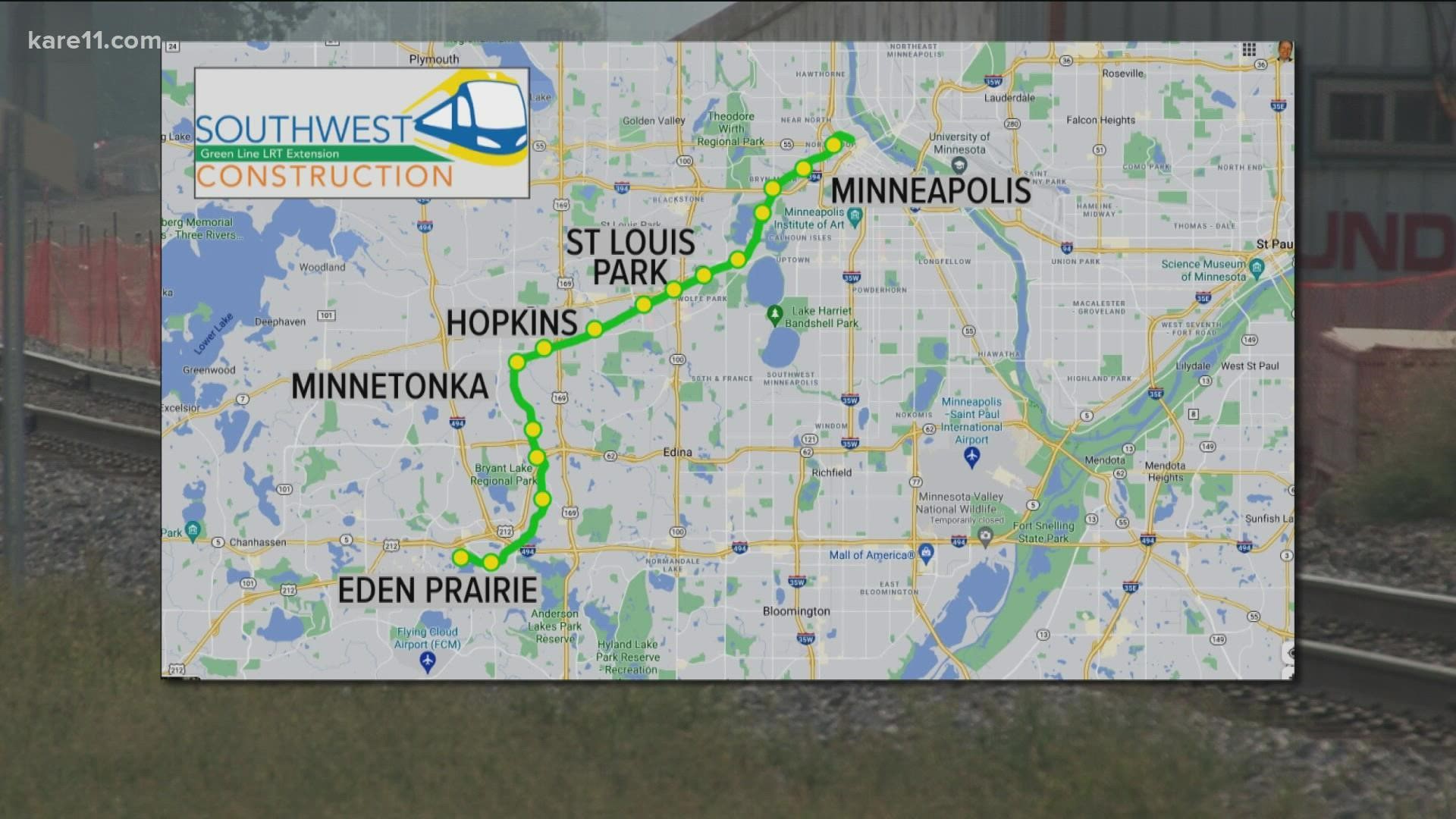 MINNEAPOLIS — Hennepin County taxpayers will pick up a larger tab for the Southwest Light Rail line than originally expected, due to cost overruns in the largest public works project in state history.

The Hennepin County board Thursday voted to spend an extra $200 million to make sure the transit project doesn't run off contingency funds during the final years of construction. The $2 billion project will connect Minneapolis with Eden Prairie, also passing through parts of St. Louis Park, Hopkins, and Minnetonka.

It's money the board agreed to set aside in 2018 as a backstop against cost overruns, and the Metropolitan Council, which is managing the project, asked for the funds to be made available now.

Contractors encountered complications with some of the tunnels along the 14-mile route. The project also incurred the added expense of building a concrete barrier to separate light rail trains from freight trains that will be run on parallel tracks for portions of the line.

"The construction has been painful and difficult at times, like any enormous project, but I’m excited about what the future holds," Commissioner Marion Greene, who chairs the Hennepin Co. Board, told KARE.

"We need to build a system that offers users choice and brings our residents back and forth from where they live, work and play. And it's an important part of keeping our region competitive."

The federal government generally pays half the cost of light rail projects, with the rest of it being picked up by local and regional government.  Hennepin County is the largest local funder for the Southwest Light Rail Transit line, which is an extension of the Metro Transit Green Line that runs between downtown Minneapolis and downtown St. Paul.

The $200 million being released will bring Hennepin County's contribution to $878 million. The Metropolitan Council predicts the line, once completed, will provide access to 80,000 jobs along the route. It has already spurred investment in residential and commercial development along the line.

"With this additional $200 million request we thought it was time to have and independent third-party review exactly what's going on," Rep. Hornstein told KARE.

"This is a lot of public money and we would like to see some accountability and more transparency about what's driving these cost overruns," Hornstein added. "There is precedent for getting these big, complicated light rail projects done in a reasonable way."

Hornstein says he remains a strong supporter of transit, noting that the transportation bill that passed during the 2021 special session includes $57 million for two new bus rapid transit lines.

In response, the Met Council issued the following statement:

"The Met Council and Hennepin County are committed to transparency in the benefits and challenges of constructing the largest transportation project in the state. We look forward to when Southwest LRT will increase access to housing, jobs, schools, and the services our communities deserve."

Commissioner Greene says she believes that Hennepin County and the Metropolitan Council have been very open and upfront about the cost overruns.

"I’m confident that to the degree Hennepin County is able to exercise oversight we are doing so," Greene remarked.