MINNEAPOLIS — When state lawmakers set up Minnesota's new presidential primary system, they left it to the major political parties to decide which names would go on their ballots.

The DFL included 15 candidates, plus a 16th choice -- "uncommitted" -- for Super Tuesday voters. The GOP went with just President Donald J. Trump as the sole candidate on the ballot, with an allowance for write-ins.

Californian Roque "Rocky" De La Fuente, a perennial candidate, has sued the state to get ballot access and challenged the law as unconstitutional. His complaint, which will be heard by the Minnesota Supreme Court on Jan. 9, asserts parties shouldn't get final say on candidate slates because taxpayer dollars are paying for the election.

Jim Martin, a Lake Elmo resident, is also a plaintiff in the lawsuit, arguing that as a voter he should be able to choose from Republican candidates other than the president.

"We’re hoping that all the candidates on the GOP side of the ballot, end up being on the ballot including my client Rocky de la Fuente and also on the DFL ballot the same," Eric Kaardal, the attorney handling the case for Martin and De La Fuente, told KARE.

"Most importantly we're hoping that we not have this happen again, the court would issue its order saying this is constitutionally flawed and primaries of the future need to be fixed."

The state legislature has already agreed to reimburse local jurisdictions for the costs they'll incur as a result of running the presidential preference primary. Election clerks around the state submitted estimates to the Secretary of State, which totaled nearly $13 million.

The parties always controlled the precinct caucuses that are being replaced by the presidential primary election, so they've made the case they should also have the power to control which names go on the ballot.

Kaardal argues the state can't give any organization the exclusive right to vet candidates if tax money is part of the process.

"$13 million is really an expensive price tag for a presidential primary. It’s a taxpayer-funded ballot, so why does one person or one political party have control?"

Time is also a big factor at this point.

By state law early absentee voting must be made available 46 days before an election. In the case of the March 3 Super Tuesday primary, that would be January 17.  That's only eight days after the Supreme Court takes oral arguments in the case.

That creates a tight timeline for county and city elections officials who must order ballots from printing contractors. They couldn't order ballots until after Dec. 31, which was the deadline for parties to submit the candidate slates.

Some elections officials say they'll go ahead and order their first batch of a ballots, rather than wait for the Supreme Court's decision. If the court's decision is delayed, it's conceivable that ballots could be changed after people have already started voting absentee.

In that scenario, elections officials would have to scramble to offer voters a do-over ballot. Absentee ballots aren't fed into tabulating machines until one week before Election Day.

Kaardal said he's hopes the Supreme Court will render an expedited decision the same day justices hear oral arguments on the case, giving elections workers time to adjust to any additions to the ballot.

It's all new territory for elections administrators, because they'll have to predict what turnout will be in the first actual presidential primary in decades. They'll also be ordering two separate ballots for the first time in recent history.

Voters will have to choose either a DFL or Republican ballot. The names of those voters will be shared with the parties, but that voter data can't be released to the public or media.

But if the parties don't have final say on the ballot process, where will the state draw the line on candidates? There are hundreds of presidential candidates who've filed paperwork with the Federal Elections Commission.

Kaardal said the state would be within its rights to set the same types of thresholds used in state primaries, such as filing fees and voter signatures supporting the candidacy.

The most well-known Republicans running against President Trump -- Mark Sanford, William Weld and Joe Walsh -- haven't joined this lawsuit at this point. 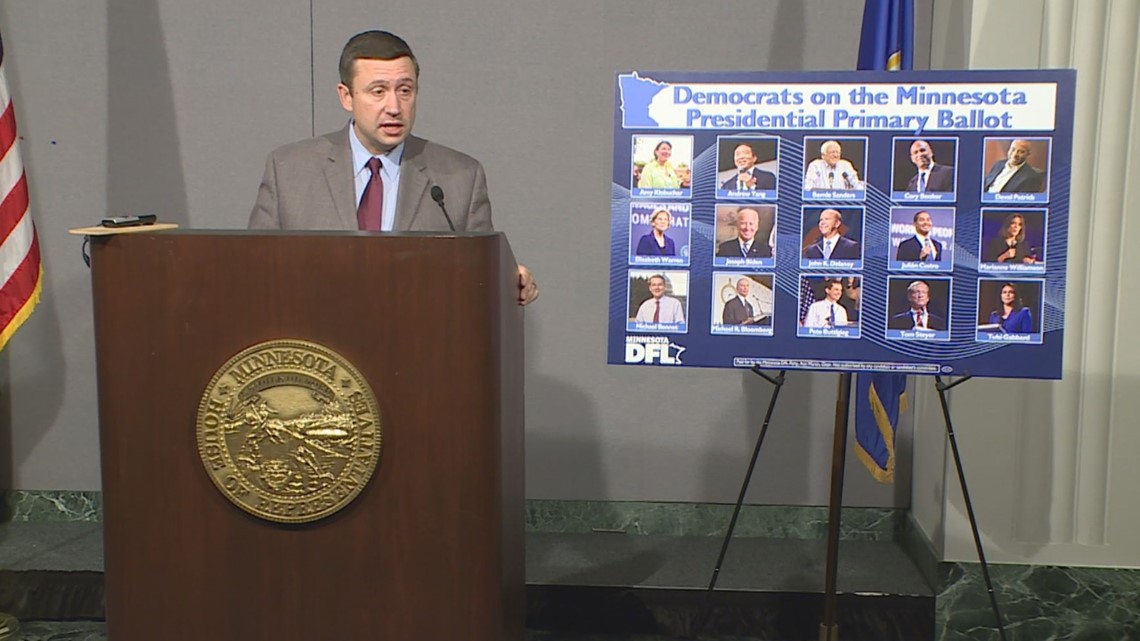