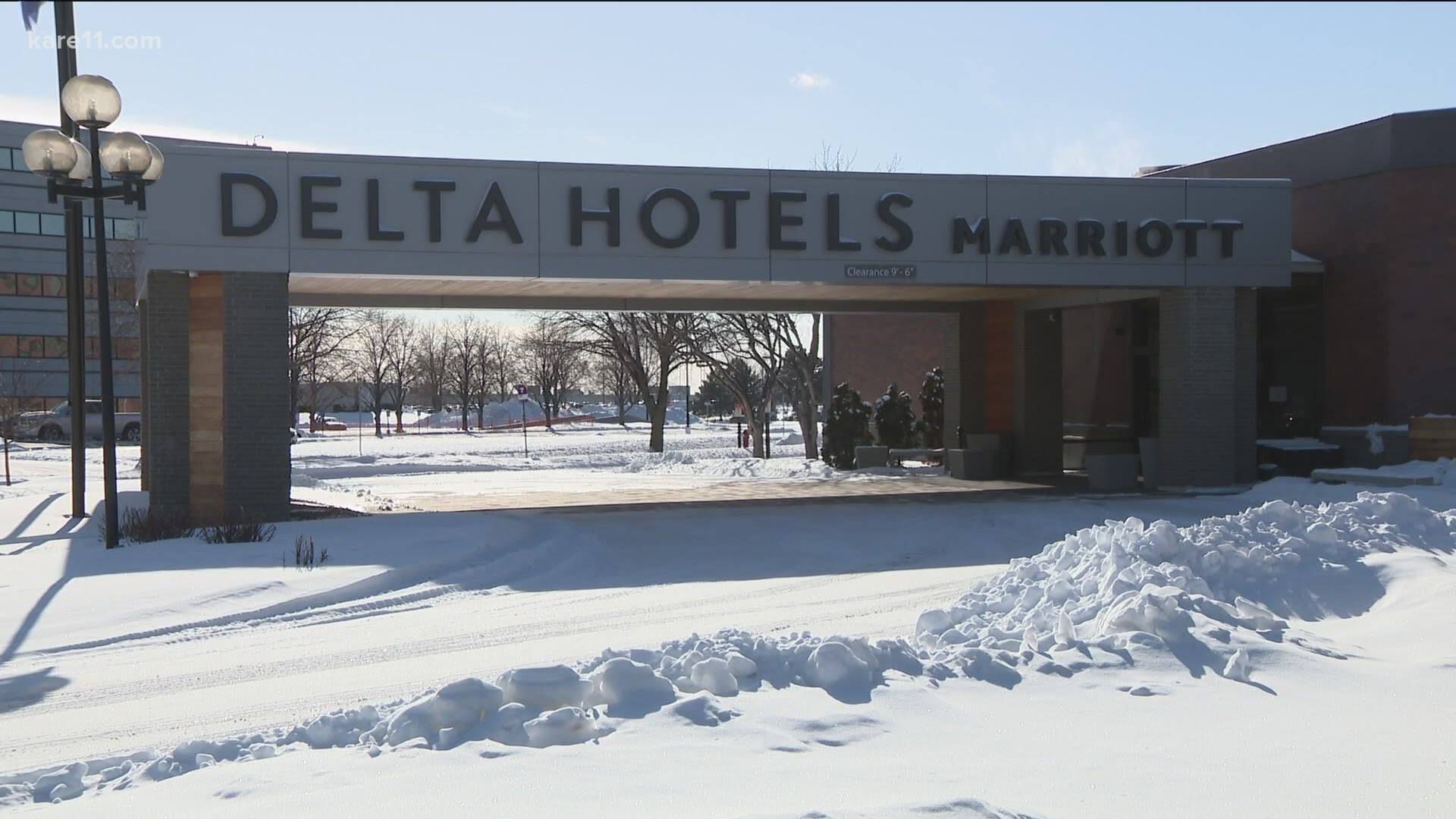 MINNEAPOLIS — Minnesota's struggling hotel and resort industry groups are looking for some assurances, so they can start booking guests and larger groups for this summer and fall.

Republican Rep. Dave Baker of Willmar laid out a plan sets the ambitious goal of getting all businesses back to full capacity a month before summer arrives.

"With case counts reaching near record lows, it is time to set the stage and communicate to Minnesotans and businesses that we can begin reopening," Rep. Baker told reporters Monday in a press conference with the industry group Hospitality Minnesota and others.

"May 1st is our goal. And things could happen. And if things go really well that goal could be moved up quite frankly."

His bill would allow that to be dialed back if conditions on the ground change for the worse, but it would require agreement by all top legislative leaders of both parties to change the timeline prescribed in his legislation. Baker said he's hoping to convince some Democrats to join him in getting the bill passed in the DFL-controlled Minnesota House.

Gov. Tim Walz has been controlling the dials for different types of business activities in the state, and has repeatedly said he's basing his action on what the scientific data and his epidemiologists have advised him about how best to control the spread of the coronavirus.

Hotel and resort owners say they're losing business to competitors in other states where COVID-19 restrictions have been loosened, or there's a firm commitment by government to reopening.

"We have groups cancelling as far out as October and November of this year, and taking their business elsewhere because other states have loosened their restrictions and they have a Next Phase plan where the state of Minnesota does not," Ken Jarka, the general manager of the Minneapolis Hilton explained

GOP Rep. Dave Baker introduces bill to fully open MN resorts on May 1, so operators can schedule conferences and other events that would normally be booked at those venues.. pic.twitter.com/PCCf3ADuBj

Ben Thuringer of Madden's on Gull Lake Resort said Minnesotans have proven they can travel to resorts safely, especially with outdoors activities that lend themselves to social distancing. He said the problem is attracting tourists who are wary of having their vacations cancelled by an executive order.

"Minnesota tourism brings in a massive amount of people from our neighboring states," Thuringer told reporters. "We call it the 'Beat-the-heat' program, coming up from Missouri, coming up from Kansas City."

Workers want to return to jobs

In the meantime, a new House DFL bill would require hotels, airports and event centers to give preference to the people they laid off when it's time to start hiring again.

"It simply requires those employers to rehire the workers they employed prior to COVID-19, when business demands allow," Rep. Andrew Carlson, the Bloomington Democrat who is the chief author of the bill explained in a Zoom press conference Monday.

He noted the job losses in the hotel and restaurant business has fallen heavily on persons of color, especially women.

"Ensuring the rights of these workers to return to the jobs they held pre-pandemic is a critical issue for racial justice as our economy recovers from COVID-19.

The news conference featured several hotel and convention center workers, all members of unions, who've been laid off since last March. A common concern among those who spoke is that they'll be replaced by someone younger and less experienced once hiring starts again.

"When I found the job, I never planned on having another job until I retired," said Tammy Houston of her job as head server at Delta Hotels by Marriott in Minneapolis. Houston, a member of Unite Here Local 17, said it was the first time in her career in the food service industry that she was able to get by without taking a second job.

Willie Jones said he's anxious to return to his job at the Minneapolis Convention Center as a supervisor with the contractor Wess Security. He said he was one of 570 members of the SIEU Local 26 Union in the Twin Cities to contract COVID-19, even though he was being careful.

"I would be devastated if we didn't have our jobs when things get back to normal."

Reporters also heard from Jimmel Thomas who'd been a cook at the Marquette Hotel in Minneapolis since 2004 before he was laid off last March. A member of Unite Here 17, Thomas said he worked his way up from dishwasher to pantry cook to a full-fledged cook for the restaurant, room service and banquets.

"I have dreams about the place, about going to work. Then I wake up and realize this is COVID-19 season," Thomas said.

"I’ve been loyal to this job. I’m 52 years old. They might just see me as another old man if I try to fill out a job application somewhere else."