How to answer those calls to vote: the latest from state election officials

Those who apply early for an absentee ballot will receive them on or just after September 18. 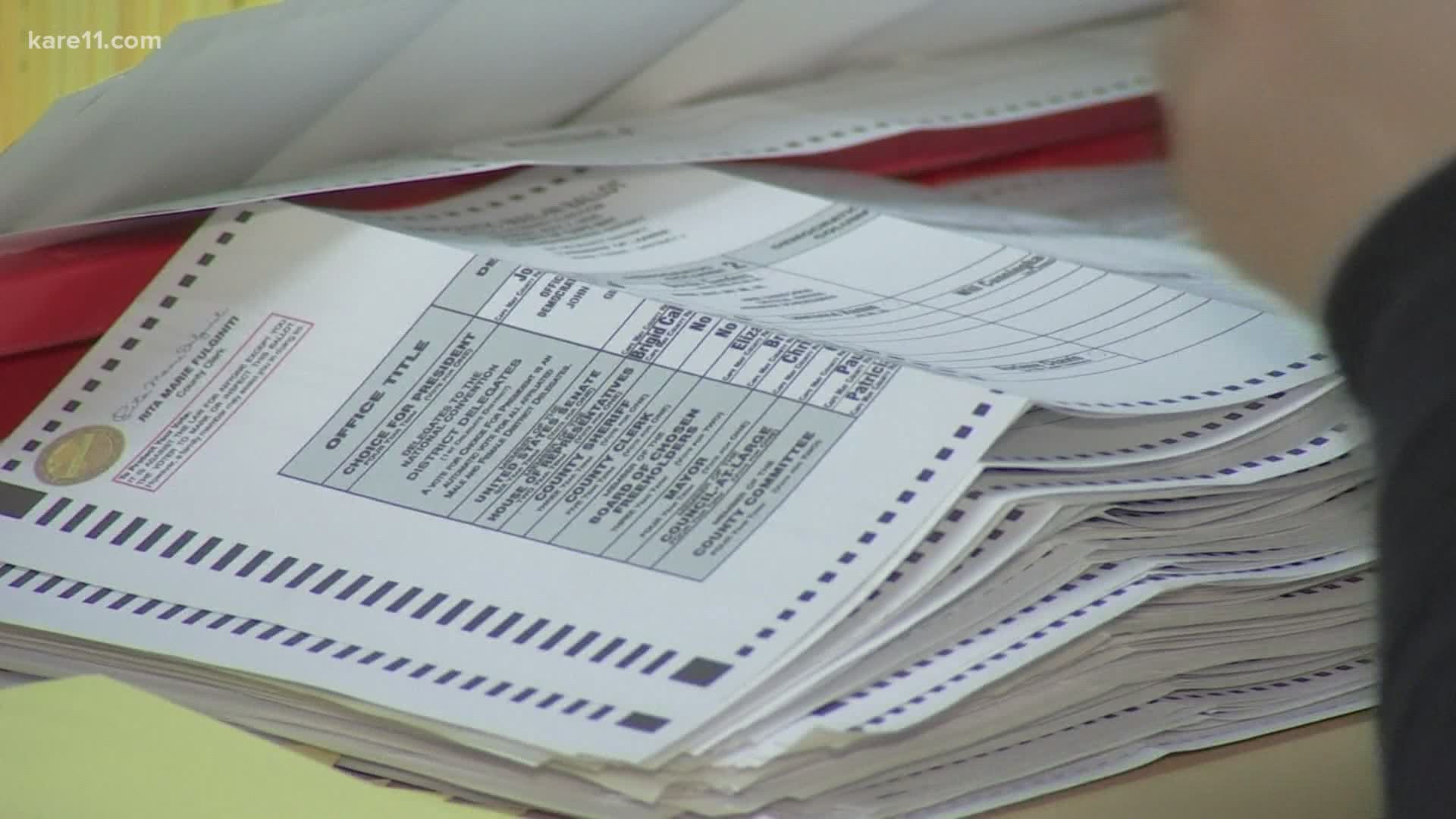 MINNEAPOLIS — The underlying message at the Democratic National Convention this week: get out and vote.

And with Republican leaders likely to share a similar message with their supporters, KARE 11’s Karla Hult talked with Minnesota’s Secretary of State Steve Simon about the latest on safely casting an absentee ballot.

When should I apply for my ballot?

Simon answered the most pressing question first: Minnesotans can fill out a ballot request form now.

“People can and should request ballots immediately. Today. Right away,” Secretary Simon said during the Zoom interview on Thursday afternoon.

There’s no official deadline for submitting your ballot request application, but Simon reminds voters they need to account for delivery of both the ballot to your home and then the completed ballot to your county elections office.

When will I receive my ballot?

Those who apply early for an absentee ballot will receive them on or just after September 18, given a state law that stipulates the “vote from home” period begins 46 days before the election on Nov. 3.

“Minnesota is tied with South Dakota for the earliest absentee period in the country,” Simon said.

How quickly can I send in my ballot upon receipt?

“As soon as the voter receives that ballot, that voter can turn it around and cast that ballot and get it in immediately if they want to,” Simon said, adding that he strongly recommends an earlier submission.

RELATED: VERIFY: Is that absentee ballot application from the 'Center for Voter Information' legit?

When does my ballot *have to be received?

Simon does note the recent court order that has extended the time frame for receiving ballots. Ballots must be postmarked no later than election day, Nov. 3. But they can be received for a full week after election day – by Nov. 10 – given the one-year special rule.

“So if it gets there in seven days, which is a pretty good cushion, that ballot will still count,” Simon said.

What about those application forms from other organizations?

Simon also addressed the surge in ballot application forms coming from outside organizations. Simon said they’ve seen as many as a million of those forms being sent to voters. And while he continues to encourage voters to use the state’s official website – mnvotes.org – he also says the outside forms are legitimate.

“They are legitimate forms. Without endorsing this group or that group, the form itself does what it says it does,” Simon explained.

Simon also urged voters to confirm they’re not duplicating their ballot applications at mnvotes.org. And the state is also suggesting voters verify the forms by confirming that the address on the return envelope is that of their county elections office – the location of which can also be confirmed on mnvotes.org.

How do I know my ballot application – and then the ballot itself – was received and processed?

Again, it’s all about the ability to track your ballot from beginning to end.

“You can track your ballots, just like you can a package or an Amazon order or anything else. You can track it and know if it arrives or not. You don’t have to stick something in a mailbox and just say a prayer and hope that it gets there. You can know for sure whether it’s gotten there and give you some peace of mind,” Simon said, again referring to the state website: mnvotes.org.

Will we have final, official results on election night?

The short answer is no. But Simon does believe we’ll know most of the “winners” of the races on election night or shortly thereafter.

“I strongly suspect on election night or very quickly thereafter, we will know the vast majority of outcomes. We will know who the winners are, just not the actual margin or the final vote total,” he said.

And finally, do the ongoing questions about mail-in voting apply to Minnesota?

Again, the short answer is no. Simon says there’s a critical distinction in the decades-old process used in Minnesota – where voters have to request their ballots – and universal mail-in voting in other states, where voters are automatically sent ballots.

“That should give some people comfort in the sense that this is nothing new, it’s actually very old,” Simon said.