The number of attacks and threats against Asian Americans are on the rise across the US, due largely to misplaced blame for the COVID-19 pandemic and scapegoating. 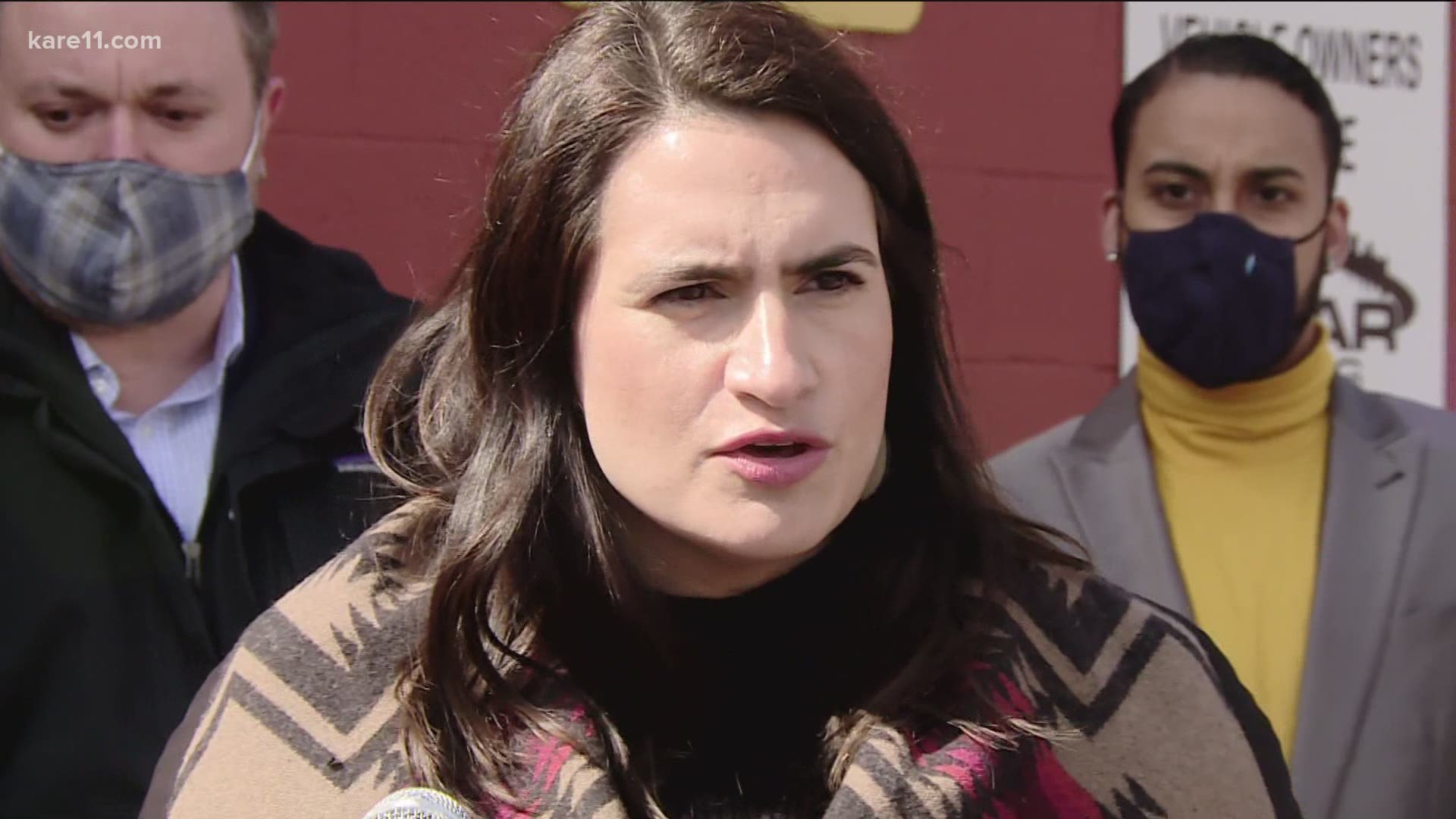 MINNEAPOLIS — US Rep. Ilhan Omar and Lt. Gov. Peggy Flanagan urged fellow Minnesotans to unite together and condemn ant-Asian hate, which has flared up in recent months here and across the nation.

They gathered Wednesday with Asian American and Pacific Islander American leaders in a windswept parking lot on the city's south side, where they delivered a message that anything that hurts immigrants or other persons of color hurts all of us as a people.

"We cannot be bystanders to hate and harassment experienced by marginalized groups. We must condemn it universally," Rep. Omar told reporters, noting the recent attack in Atlanta that left six Asian American women dead, along with two others.

She said incidents like that are rooted in the rise of open white supremacists and misogynists acting out of hatred for women and BIPOC persons, some of which is fueled and encouraged by elected leaders and rhetoric they espouse.

"We must condemn gun violence, but we also need to create a culture that does not tolerate hate as a part of normal political discourse."

Several Asian American leaders at the event spoke of being bullied and taunted and children, which was hard enough to take. But they said they were dismayed now to experience slurs, threats and scapegoating for the COVID pandemic.

"I sometimes feel some fear now when walking in Minneapolis and going to the grocery store. I didn't feel that here 20 years ago," Ekta Prakash, the president of The Center for Asian and Pacific Islanders, or CAPI, explained.

"An attack on one community is an attack on all of us. And we don't want to see that happen and we get divided."

Omar and Flanagan both applauded at hate crimes bill pending at the State Capitol, authored by DFL Reps. Frank Hornstein and Samantha Vang. The bill would make it easier for victims to report hate crimes, enhance tracking of those crimes and boost training for police officers who investigate those cases.

"The governor and I are strong supporters of that legislation, and urge the Senate to give it a hearing," Flanagan remarked.

"We cannot 'Minnesota Nice' our way through the uncomfortable realities that face us."

The measure faces an uncertain fate in the GOP-controlled Minnesota Senate because Republicans object to adding the terms "sexual orientation, gender identity, gender expression" to the list of reasons an attack can be classified as a bias crime.

Most hate crimes incidents go unreported, but the FBI has reported a 150% increase in those cases in major metropolitan areas, including the Twin Cities. Earlier in March, KARE Sunrise news anchor Gia Vang's father was threatened by a passing motorist while walking his grandchild to a school bus stop.

Monday a man attacked as 65-year-old Asian American woman in New York's Times Square, kicking her in the stomach and stomping on her face, in a scene captured on surveillance video. Witnesses told police the man was shouting anti-Asian slurs as he attacked the woman, who has since been released from the hospital and is recovering at home.

RELATED: Suspect in attack on Asian American woman in NYC is arrested

In Minneapolis @Ilhan @LtGovFlanagan and others call on all Minnesotans to reject anti-Asian hatred. Rep. Omar: "We also need to create a culture that does not tolerate hate as part of normal political debate." pic.twitter.com/NFmjxox0Sj

Omar and Flanagan have been at the leading edge of a movement towards racial equity in Minnesota. The 5th District Congresswoman was the first Somali immigrant elected to the Congress. The lieutenant governor, who is a member of the White Earth Nation of Ojibwe, is the highest ranking elected Native American official in the US.